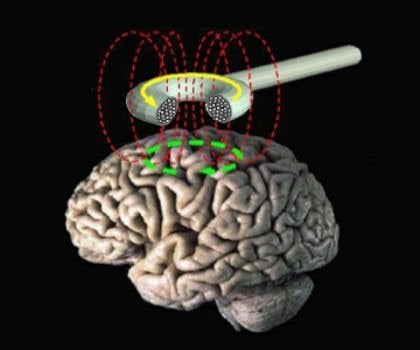 Researchers used transcranial magnetic stimulation at different points in time as the participants were about to undertake a hand movement task. The researchers were able to measure alterations in brain excitability ahead of the movement, and chart the differences between each person. This image shows how TMS is applied. Credit provided below.
Home
Featured

A mechanism in the brain which controls tics in children with Tourette Syndrome (TS) has been discovered by scientists at The University of Nottingham.

The study, which has been published in the British Psychological Society’s Journal of Neuropsychology, could herald new non-drug therapies to help young people with TS overcome the repetitive physical movements and vocal sounds which characterise their condition.

Professor Stephen Jackson, in the University’s School of Psychology, said: “This new study is very important as it indicates that motor and vocal tics in children may be controlled by brain changes that alter the excitability of brain cells ahead of voluntary movements. You can think of this as a bit like turning the volume down on an over-loud motor system. This is important as it suggests a mechanism that might lead to an effective non-pharmacological therapy for Tourette Syndrome.”

The neurological condition TS affects around one child in every 100 and usually starts during early childhood. Scientists believe that the tics that affect children with TS are caused by faulty wiring in the brain that leads to hyper excitability in the brain regions controlling motor function.

In adolescence, there is a period of ‘pruning back’ in which redundant brain connections are removed and other structural and functional brain changes occur.

During this time, around one-third of children with TS will find that their tics disappear and another third are able to more effectively control their tics. Unfortunately, the remaining third of individuals will see little or no change in their tics and are likely to remain troubled by their TS symptoms into adulthood.

This clinical observation suggests that there are mechanisms in the brain that are involved in controlling tics and undergo development or re-organisation during the teenage years.

Amelia Draper added: “The research is based on the general hypothesis that an area in the brain called the striatum is overactive as a result of alterations in the early development of the brain. As a result, the signals that are relayed to the brain’s cortex region lead to hyper-excitability and cause tics to occur.

“We have looked at how that hyperactivity and the resultant tics might be controlled by finding a way to ‘turn down the volume’ on that ‘cortical excitability’. This is potentially extremely important as the parents of children with tics are desperate to find a safe and effective therapy that is an alternative to drug treatments.”

In the current study the team used a method called Transcranial Magnetic Stimulation (TMS) in which a magnetic field is passed over the brain to produce a weak electrical current which stimulates motor function to induce a twitch response.

By delivering TMS at different points in time as participants were about to undertake a hand movement, the researchers were able to measure alterations in brain excitability ahead of the movement and chart the differences between each person.

The study showed that subjects with TS, unlike those of a similar age without the condition, were least able to modulate the hyperactivity in the brain.

Professor Jackson said: “If there is a relationship between this cortical excitability or hyperactivity and tics then this is really important as it means that there may be something that we might be able to do to help children with TS to better control these unwanted movements.”

Further research by the team has involved the use of a similar type of brain stimulation called transcranial direct current stimulation (TDCS) to study the brains of children with TS. Early results suggest that TDS can be applied to decrease neuronal excitability and this may be effective in suppressing tics for extended periods. In addition, if another form of TDCS is applied, one that increases neuronal excitability, it may act to improve learning and memory function, particularly in the context of behavioural therapies. Following use of these treatments lasting effects can be applied to the brain.

If proven to be effective, the technology could be adapted into a TENS machine-style device that would offer a cheap, portable and individualised therapy for children with TS.

Professor Jackson added: “For the one-third of people who aren’t going to get better this could offer them a much needed assistance with controlling their tics, while relying less on other conventional pharmaceutical therapies which can have associated side effects such as weight gain or tiredness.

“It can be applied at home while the child is watching TV or eating their cornflakes so it would reduce the amount of school they would miss and potentially we can use the TDCS to both control the tics and make that control more effective and longer lasting.”

As part of her work Amelia Draper is also using MRI scanning technology to examine the potential relationship between cortical excitability and a brain chemical that appears to be strongly linked to neuronal excitability in TS.

Rod Shaw, Chief Executive of the James Tudor Foundation, said: “We’re glad to see that the funding we have given to this project is producing some interesting and potentially useful results.”

Notes about this neurology and Tourette Syndrome research

Professor Jackson’s research is a key project within the University’s appeal, Impact: The Nottingham Campaign, which is delivering the University’s vision to change lives, tackle global issues and shape the future.

The work was funded with a £150,000 grant from the James Tudor Foundation and was carried out by PhD student Amelia Draper.