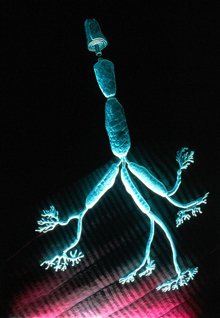 ALS is a progressive, fatal condition, in which the motor neurons that control movement and breathing gradually cease to function. There is currently no cure for ALS. The image shows a long axon of a motor neuron which relays signals from nerve to muscle cells.
Home
Featured

Researchers at the Stanford University School of Medicine have identified mutations in several new genes that might be associated with the development of spontaneously occurring cases of the neurodegenerative disease known as amyotrophic lateral sclerosis, or ALS. Also known as Lou Gehrig’s disease, the progressive, fatal condition, in which the motor neurons that control movement and breathing gradually cease to function, has no cure.

Although researchers know of some mutations associated with inherited forms of ALS, the majority of patients have no family history of the disease, and there are few clues as to its cause. The Stanford researchers compared the DNA sequences of 47 patients who have the spontaneous form of the disease, known as sporadic ALS, with those of their unaffected parents. The goal was to identify new mutations that were present in the patient but not in either parent that may have contributed to disease development.

Several suspects are mutations in genes that encode chromatin regulators — cellular proteins that govern how DNA is packed into the nucleus of a cell and how it is accessed when genes are expressed. Protein members of one these chromatin-regulatory complexes have recently been shown to play roles in normal development and some forms of cancer.

“The more we know about the genetic causes of the disorder, the greater insight we will have as to possible therapeutic targets,” said Aaron Gitler, PhD, associate professor of genetics. “Until now, researchers have primarily relied upon large families with many cases of inherited ALS and attempted to pinpoint genetic regions that seem to occur only in patients. But more than 90 percent of ALS cases are sporadic, and many of the genes involved in these cases are unknown.”

Gitler is the senior author of the study, published online May 26 in Nature Neuroscience. Postdoctoral scholar Alessandra Chesi, PhD, is the lead author. Gitler and Chesi collaborated with members of the laboratory of Gerald Crabtree, MD, professor of developmental biology and of pathology. Crabtree, a Howard Hughes Medical Institute investigator, is also a co-author of the study.

Chesi and Gitler combined deductive reasoning with recent advances in sequencing technology to conduct the work, which relied on the availability of genetic samples from not only ALS patients, but also the patients’ unaffected parents. Such trios can be difficult to obtain for diseases like sporadic ALS that strike well into adulthood when a patient’s parents may no longer be alive. Gitler and Chesi collaborated with researchers from Emory University and Johns Hopkins University to collect these samples.

The researchers compared the sequences of a portion of the genome called the exome, which directly contributes to the amino acid sequences of all the proteins in a cell. (Many genes contain intervening, non-protein-coding regions of DNA called introns that are removed prior to protein production.) Mutations found only in the patient’s exome, but not in that of his or her parents’, were viewed as potential disease-associated candidates – particularly if they affected the composition or structure of the resulting protein made from that gene.

“We wanted to find novel changes in the patients,” Chesi said. “These represent a class of mutations called de novo mutations that likely occurred during the production of the parents’ reproductive cells.” As a result, these mutations would be carried in all the cells of patients, but not in their parents or siblings.

Using the exome sequencing technique, the researchers identified 25 de novo mutations in the ALS patients. Of these, five are known to be in genes involved in the regulation of the tightly packed form of DNA called chromatin — a proportion that is much higher than would have been expected by chance, according to Chesi.

Furthermore, one of the five chromatin regulatory proteins, SS18L1, is a member of a neuron-specific complex called nBAF, which has long been studied in Crabtree’s laboratory. This complex is strongly expressed in the brain and spinal cord, and affects the ability of the neurons to form branching structures called dendrites that are essential to nerve signaling.

“We found that, in one sporadic ALS case, the last nine amino acids of this protein are missing,” Gitler said. “I knew that Gerald Crabtree’s lab had been investigating SS18L1, so I asked him about it. In fact, they had already identified these amino acids as being very important to the function of the protein.”

When the researchers expressed the mutant SS18L1 in motor neurons isolated from mouse embryos, they found the neurons were unable to extend and grow new dendrites as robustly as normal neurons in response to stimuli. They also showed that SS18L1 appears to physically interact with another protein known to be involved in cases of familial, or inherited, ALS.

Although the results are intriguing, the researchers caution that more work is necessary to conclusively prove whether and how mutations in SS18L1 contribute to sporadic cases of ALS. But now they have an idea of where to look in other patients, without requiring the existence of patient and parent trios. They are planning to sequence SS18L1 and other candidates in an additional few thousand sporadic ALS cases.

“This is the first systematic analysis of ALS triads for the presence of de novo mutations,” Chesi said. “Now we have a list of candidate genes we can pursue. We haven’t proven that these mutations cause ALS, but we’ve shown, at least in the context of SS18L1, that the mutation carried by some patients is damaging to the protein and affects the ability of mouse motor neurons to form dendrites.”

Notes about this neurogenetics and ALS research

The research was funded by a National Institutes of Health Director’s New Innovator Award (1DP2OD004417), the National Institutes of Health (1R01NS065317 and 5U01NS062713), the Department of Defense ALS Research Program, the Pew Charitable Trusts, the Rita Allen Foundation, the Packard Center for ALS Research at Johns Hopkins, the National Health and Medical Research Council of Australia and the Motor Neurone Disease Research Institute of Australia.