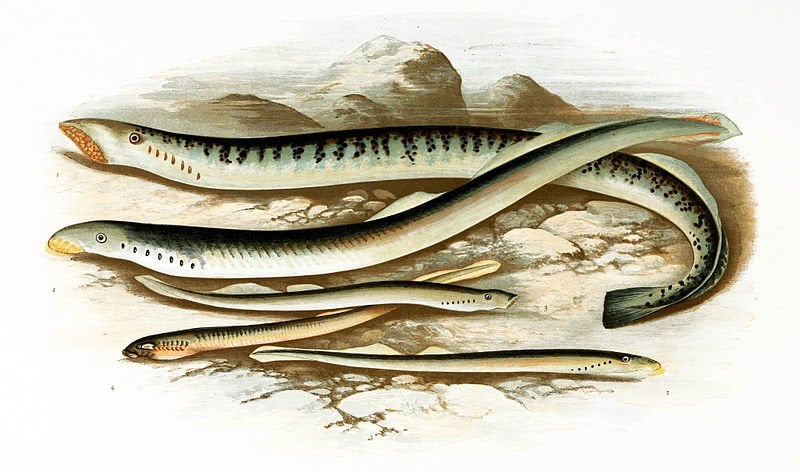 The lamprey has large, identified neurons in its brain and spinal cord, making it an excellent model to study regeneration at the single cell-level. The lamprey image is credited to Alexander Francis Lydon.
Home
Featured

Scientists at the Marine Biological Laboratory (MBL) have identified several genes linked to human neurological disorders, including Alzheimer’s disease, Parkinson’s disease and spinal cord injury, in the sea lamprey, a vertebrate fish whose whole-genome sequence is reported this week in the journal Nature Genetics.

“This means that we can use the sea lamprey as a powerful model to drive forward our molecular understanding of human neurodegenerative disease and neurological disorders,” says Jennifer Morgan of the MBL’s Eugene Bell Center for Regenerative Biology and Tissue Engineering. The ultimate goals are to determine what goes wrong with neurons after injury and during disease, and to determine how to correct these deficits in order to restore normal nervous system functions.

Unlike humans, the lamprey has an extraordinary capacity to regenerate its nervous system. If a lamprey’s spinal cord is severed, it can regenerate the damaged nerve cells and be swimming again in 10-12 weeks.

Morgan and her collaborators at MBL, Ona Bloom and Joseph Buxbaum, have been studying the lamprey’s recovery from spinal cord injury since 2009. The lamprey has large, identified neurons in its brain and spinal cord, making it an excellent model to study regeneration at the single cell-level. Now, the lamprey’s genomic information gives them a whole new “toolkit” for understanding its regenerative mechanisms, and for comparing aspects of its physiology, such as inflammation response, to that of humans.

The lamprey genome project was accomplished by a consortium of 59 researchers led by Weiming Li of Michigan State University and Jeramiah Smith of the University of Kentucky. The MBL scientists’ contribution focused on neural aspects of the genome, including one of the project’s most intriguing findings.

Lampreys, in contrast to humans, don’t have myelin, an insulating sheath around neurons that allows faster conduction of nerve impulses. Yet the consortium found genes expressed in the lamprey that are normally expressed in myelin. In humans, myelin-associated molecules inhibit nerves from regenerating if damaged. “A lot of the focus of the spinal cord injury field is on neutralizing those inhibitory molecules,” Morgan says.

“So there is an interesting conundrum,” Morgan says. “What are these myelin-associated genes doing in an animal that doesn’t have myelin, and yet is good at regeneration? It opens up a new and interesting set of questions,” she says. Addressing them could bring insight to why humans lost the capacity for neural regeneration long ago, and how it might be restored.

At present, Morgan and her collaborators are focused on analyzing which genes are expressed and when, after spinal cord injury and during regeneration. The whole-genome sequence gives them an invaluable reference for their work.

Morgan, Bloom, and Buxbaum collaborate in the MBL Whitman Center through funding by the Charles Evans Foundation. Ona Bloom is based at the Feinstein Institute for Medical Research/Hofstra North Shore-Long Island Jewish in New York. Joseph Buxbaum is from Mount Sinai School of Medicine in New York.