A clinical trial of an Alzheimer’s disease treatment developed at MIT has found that the nutrient cocktail can improve memory in patients with early Alzheimer’s. The results confirm and expand the findings of an earlier trial of the nutritional supplement, which is designed to promote new connections between brain cells.

Alzheimer’s patients gradually lose those connections, known as synapses, leading to memory loss and other cognitive impairments. The supplement mixture, known as Souvenaid, appears to stimulate growth of new synapses, says Richard Wurtman, a professor emeritus of brain and cognitive sciences at MIT who invented the nutrient mixture.

“You want to improve the numbers of synapses, not by slowing their degradation — though of course you’d love to do that too — but rather by increasing the formation of the synapses,” Wurtman says. 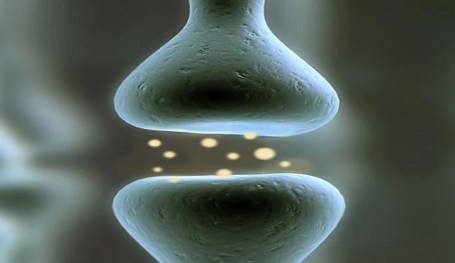 A graphic depicting a synapse, a connection between brain cells is shown. Image adapted from graphic by Christine Daniloff.

To do that, Wurtman came up with a mixture of three naturally occurring dietary compounds: choline, uridine and the omega-3 fatty acid DHA. Choline can be found in meats, nuts and eggs, and omega-3 fatty acids are found in a variety of sources, including fish, eggs, flaxseed and meat from grass-fed animals. Uridine is produced by the liver and kidney, and is present in some foods as a component of RNA.

These nutrients are precursors to the lipid molecules that, along with specific proteins, make up brain-cell membranes, which form synapses. To be effective, all three precursors must be administered together.

Results of the clinical trial, conducted in Europe, appear in the July 10 online edition of the Journal of Alzheimer’s Disease. The new findings are encouraging because very few clinical trials have produced consistent improvement in Alzheimer’s patients, says Jeffrey Cummings, director of the Cleveland Clinic’s Lou Ruvo Center for Brain Health.

“Memory loss is the central characteristic of Alzheimer’s, so something that improves memory would be of great interest,” says Cummings, who was not part of the research team.

Plans for commercial release of the supplement are not finalized, according to Nutricia, the company testing and marketing Souvenaid, but it will likely be available in Europe first. Nutricia is the specialized health care division of the food company Danone, known as Dannon in the United States.

Wurtman first came up with the idea of targeting synapse loss to combat Alzheimer’s about 10 years ago. In animal studies, he showed that his dietary cocktail boosted the number of dendritic spines, or small outcroppings of neural membranes, found in brain cells. These spines are necessary to form new synapses between neurons.

The new study, performed in several European countries and overseen by Scheltens as principal investigator, followed 259 patients for six months. Patients, whether taking Souvenaid or a placebo, improved their verbal-memory performance for the first three months, but the placebo patients deteriorated during the following three months, while the Souvenaid patients continued to improve. For this trial, the researchers used more comprehensive memory tests taken from the neuropsychological test battery, often used to assess Alzheimer’s patients in clinical research.

Patients showed a very high compliance rate: About 97 percent of the patients followed the regimen throughout the study, and no serious side effects were seen.

Both clinical trials were sponsored by Nutricia. MIT has patented the mixture of nutrients used in the study, and Nutricia holds the exclusive license on the patent.

In the new study, the researchers used electroencephalography (EEG) to measure how patients’ brain-activity patterns changed throughout the study. They found that as the trial went on, the brains of patients receiving the supplements started to shift from patterns typical of dementia to more normal patterns. Because EEG patterns reflect synaptic activity, this suggests that synaptic function increased following treatment, the researchers say.

Patients entering this study were in the early stages of Alzheimer’s disease, averaging around 25 on a scale of dementia that ranges from 1 to 30, with 30 being normal. A previous trial found that the supplement cocktail does not work in patients with Alzheimer’s at a more advanced stage. This makes sense, Wurtman says, because patients with more advanced dementia have probably already lost many neurons, so they can’t form new synapses.

A two-year trial involving patients who don’t have Alzheimer’s, but who are starting to show mild cognitive impairment, is now underway. If the drink seems to help, it could be used in people who test positive for very early signs of Alzheimer’s, before symptoms appear, Wurtman says. Such tests, which include PET scanning of the hippocampus, are now rarely done because there are no good Alzheimer’s treatments available.

Notes about this Alzheimer’s disease research and article