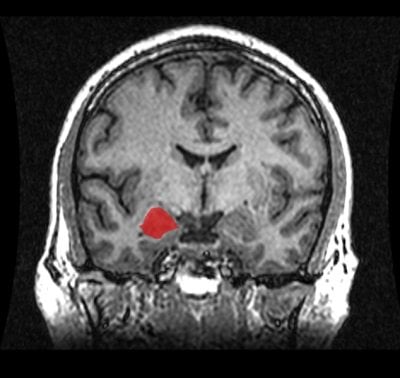 The amygdala is an evolutionarily primitive part of the brain located deep in the temporal lobe. It comprises several subregions associated with different aspects of perceiving, learning and regulating emotions. This MRI scan shows the location of the amygdala in the brain and is for illustrative purposes. The image is not connected to the research.
Home
Featured

Prolonged stress and anxiety during childhood is a risk factor for developing anxiety disorders and depression later in life. Now, Stanford University School of Medicine researchers have shown that by measuring the size and connectivity of a part of the brain associated with processing emotion — the amygdala — they can predict the degree of anxiety a young child is experiencing in daily life.

They found that the larger the amygdala and the stronger its connections with other parts of the brain involved in perception and regulation of emotion, the greater the amount of anxiety a child was experiencing.

The findings do not mean that a young child with an enlarged and highly connected amygdala will necessarily go on to develop a mood disorder, said Vinod Menon, PhD, professor of psychiatry and behavioral sciences and senior author of the study, which will be published online Nov. 20 in Biological Psychiatry.

“We are not at a point where we can use these findings to predict the likelihood of a child developing mood and anxiety disorders as an adult, but it is an important step in the identification of young children at risk for clinical anxiety,” Menon said.

Participants in the study were 76 children ages 7 to 9. “For the cognitive emotional assessments to be reliable, 7 years old is about as young as a child can be,” said Menon, who is a member of the Child Health Research Institute at Stanford. “But the changes to the amygdala may have started earlier.”

The researchers compared the results of the assessment with the size and connectivity data of each child’s brain to draw their conclusions.

Anxiety is a common emotional reaction to stress. It normally helps us cope with difficult situations. But sustained anxiety can lead to disabling conditions such as phobia, post-traumatic stress disorder and generalized anxiety disorder.

Studies of adults suffering from anxiety disorders have shown that they possess enlarged, highly connected amygdala. Studies of laboratory animals placed in an environment causing chronic stress have determined that the animals’ amygdalae grew additional synapses and that synaptic connectivity increased in response to the resulting persistent anxiety.

The amygdala is an evolutionarily primitive part of the brain located deep in the temporal lobe. It comprises several subregions associated with different aspects of perceiving, learning and regulating emotions.

The basolateral amygdala, a subregion important for processing emotion-related sensory information and communicating it to the neocortex — the evolutionarily newer part of the brain — is specifically where Shaozheng Qin, PhD, a postdoctoral scholar and lead author of the study, detected the enlargement.

Qin used magnetic resonance imaging to measure the size of the various subregions of the amygdala and functional MRI to measure the connectivity of those regions to other areas of the brain.

“The basolateral amygdala had stronger functional connections with multiple areas of the neocortex in children with higher anxiety levels,” Qin said.

The researchers identified four functional neocortical systems that were affected. One of the systems deals with perception, another with attention and vigilance, a third with reward and motivation, and the fourth with detection of salient emotional stimuli and regulation of emotional responses.

“All four of these core systems are impacted by childhood anxiety,” Qin said.

Menon said they were surprised that alterations to the structure and connectivity of the amygdala were so significant in the children with higher levels of anxiety, given both the young age of the children and the fact that their anxiety levels were too low to be considered clinical.

The study provides important new insights into the developmental origins of anxiety, he added. Understanding the influence of childhood anxiety on specific amygdala circuits, as identified in the study, could aid in the early identification and treatment of children at risk for anxiety disorders.

Notes about this neuropsychology and neurodevelopment research

The study was funded by the National Institutes of Health (grants HD047520, HD059205 and MH084164), the Netherlands Organization for Scientific Research, Stanford’s Child Health Research Institute and the Lucile Packard Foundation for Children’s Health.

Contact: Louis Bergeron – Stanford University Medical Center
Source: Stanford University Medical Center press release
Image Source: The image is credited to Amber Rieder, Jenna Traynor, Geoffrey B Hall and is in the public domain.
Original Research: The research will be published in Biological Psychiatry. We will provide a link to the research when available.