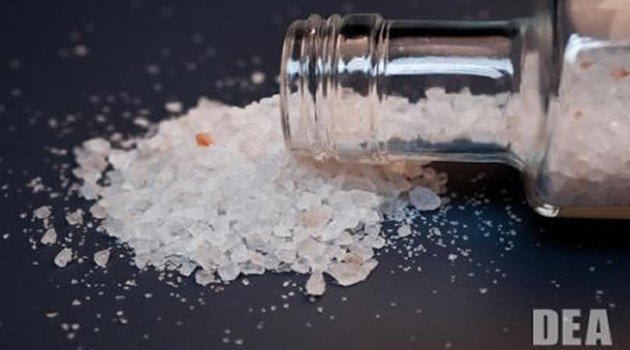 MDPV and other "bath salts" are derived from cathinone, the principle active ingredient in khat, a leaf chewed in the Arbaian peninsula and Africa which has stimulant effects. This DEA image shows a bottle of 'bath salts'.
Home
Featured

‘Bath Salts’ Stimulant Could Be More Addictive than Meth

Scientists at The Scripps Research Institute (TSRI) have published one of the first laboratory studies of MDPV, an emerging recreational drug that has been sold as “bath salts.” The TSRI researchers confirmed the drug’s powerful stimulant effects in rats and found evidence that it could be more addictive than methamphetamine, one of the most addictive substances to date.

“We observed that rats will press a lever more often to get a single infusion of MPDV than they will for meth, across a fairly wide dose range,” said TSRI Associate Professor Michael A. Taffe, who was the principal investigator of the study.

The findings are described by the journal Neuropharmacology online ahead of the publication’s August 2013 print issue.

A New Threat from an Old Source

MDPV (3,4-methylenedioxypyrovalerone) and other “bath salts” drugs are actually derived from cathinone, the principal active ingredient in khat, a leaf chewed for its stimulant effects throughout northeast Africa and the Arabian peninsula. Synthesized by pharmaceutical companies decades ago but never used, cathinone derivatives were rediscovered by underground chemists in the early 2000s. The drugs have been sold as “bath salts” or “plant food” to skirt laws against marketing them for internal use, but in the U.S., UK, Canada and many other countries, their sale for any purpose is now banned.

Cathinone derivatives inhibit the normal removal of the neurotransmitters dopamine, noradrenaline and serotonin from synapses (the small gap separating neurons that enables cell-to-cell communication). In this way, the derivatives disturb the activity of brain networks that mediate desire, pleasure, muscle movements and cognition. Users have described classic stimulant effects such as an initial euphoria, increased physical activity, an inability to sleep and a lack of desire for food or water—plus almost irresistible cravings to take more of the drug. Higher doses bring a strong risk of paranoid psychoses, violence and suicide.

A few years ago, the sudden rise in anecdotal reports of these drugs’ dangerous effects prompted Taffe and his TSRI colleague, chemist Associate Professor Tobin J. Dickerson, to set up studies with laboratory animals. “The drugs had not yet been scheduled, and we were able to work out how to synthesize them in sufficient quantities for animal testing,” said Dickerson.

“One of the great strengths of TSRI with its multidisciplinary, collaborative environment is that we can get started on researching these drugs even before the drugs are available in pure form from the ordinary scientific suppliers,” Taffe said.

In five other studies published over the past year, Taffe, Dickerson and their laboratories have looked at the effects of MDPV and a related “bath salts” cathinone derivative, mephedrone, in a range of animal models.

In this new study, the researchers directly compared some of MDPV’s major stimulant effects to those of methamphetamine.

In a standard method for evaluating stimulant drugs, the animals were able to dose themselves intravenously by pressing a lever. As is typical for addictive stimulants, the rats maintained a steady self-administration of each drug whenever they could. In one set of tests designed to quantify how much the rats desired each drug, they could get another infusion only by making ever-greater numbers of lever presses.

“When we increased how many lever presses a rat would have to emit to get an additional infusion of drug, we observed that rats emitted about 60 presses on average for a dose of METH but up to about 600 for MDPV—some rats would even emit 3,000 lever presses for a single hit of MDPV,” said TSRI Research Associate Shawn M. Aarde, who was first author of the study. “If you consider these lever presses a measure of how much a rat will work to get a drug infusion, then these rats worked more than 10 times harder to get MDPV.”

MDPV increased the average activity level of the animals. But at higher—albeit still modest—doses, it produced repetitive behaviors similar to the tooth-grinding and compulsive skin-picking seen in human meth and MDPV users. “One stereotyped behavior that we often observed was a rat repeatedly licking the clear plastic walls of its operant chamber—a behavior that was sometimes uninterruptable,” said Aarde. “One could say MDPV turned some rats into ‘window lickers’ of a sort.”

Reports on human MDPV users suggest that the drug’s behavioral effects can persist for lengthy periods after drug use stops, and Taffe and Aarde are now setting up studies of MDPV’s long-term behavioral effects.

Natural Compound in Basil May Protect Against Alzheimer’s Disease

“MDPV looks like it’s going to stick around as a recreational stimulant, because it is so potent,” said Taffe.

He notes, however, that in the wake of the criminalization of first-generation cathinone derivatives, new members of this drug class are being invented that will also require study. He hopes in time to be able to anticipate how future chemical variations on the cathinone theme will change the way these drugs act on the brain.

“We’d like the ability to predict, for example, which ones have the highest abuse potential, which are more likely to have long-term toxicity issues, and which carry high risks of acute lethal consequences,” Taffe said.

Notes about this neuropharmacology and addiction research

Other contributors to the study, “The novel recreational drug 3,4-methylenedioxypyrovalerone (MDPV) is a potent psychomotor stimulant: self-administration and locomotor activity in rats,” in Neuropharmacology (Volume 71), were P.K. Huang and K.M. Creehan of TSRI.