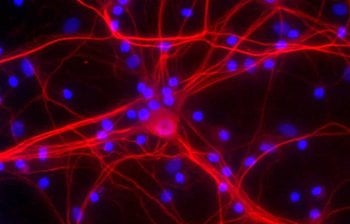 Researchers discovered motor neurons from the mouse model with a slower progressing form of MND showed an increase in protective inflammation and immune response. They also showed increased function of the mechanisms which protect motor neurons from damage. The image shows motor neurons. Credited to University of Sheffield.
Home
Featured

New research from the University of Sheffield could offer solutions into slowing down the progression of motor neuron disease (MND).

MND is an incurable disease destroying the body’s cells which control movement causing progressive disability. Present treatment options for those with MND only have a modest effect in improving the patient’s quality of life.

Professor Pamela Shaw, Director of SITraN, and her research team worked in collaboration with a fellow world leading MND scientist Dr Caterina Bendotti and her group at the Mario Negri Institute for Pharmacological Research in Milan, Italy. Together they investigated why the progression of MND following onset of symptoms varies in speed, even in the presence of a known genetic cause of the condition.

The research, published in the scientific journal Brain, investigated two mouse models of MND caused by an alteration in the SOD1 gene, a known cause of MND in humans. One of the strains had a rapidly progressing disease course and the other a much slower change in the symptoms of MND. The teams from Sheffield and Milan looked at the factors which might explain the differences observed in speed and severity in the progression of the disease. They used a scientific technique known as gene expression profiling to identify factors within motor neurons that control vulnerability or resistance to MND in order to shed light on the factors important for the speed of motor neuron injury in human patients.

The study, funded by the Motor Neuron Disease Association, revealed new evidence, at the point of onset of the disease, before muscle weakness was observed, showing key differences in major molecular pathways and the way the protective systems of the body responded, between the profiles of the rapid progressing and slow progressing mouse models. In the case of the model with rapidly progressing MND the motor neurons showed reduced functioning of the cellular systems for energy production, disposal of waste proteins and neuroprotection. Motor neurons from the model with more slowly progressing MND showed an increase in protective inflammation and immune responses and increased function of the mechanisms that protect motor neurons from damage.

The research provides valuable clues about mechanisms that have the effect of slowing down the progression of disabling symptoms in MND.

Professor Shaw said that the state-of-the-art Functional Genomics laboratory in SITraN had enabled the research team to use a cutting edge technique called gene expression profiling.

“This enables us to ‘get inside’ the motor neurons in health and disease and understand better what is happening to cause motor neuron injury in MND,” she said.

“This project was a wonderful collaboration, supported by the MND Association, between research teams in Sheffield and Milan. We are very excited about the results which have given us some new ideas for treatment strategies which may help to slow disease progression in human MND.”

Dr Caterina Bendotti said: “MND is a clinically heterogenous disease with a high variability in its course which makes assessments of potential therapies difficult. Thanks to the recent evidence in our laboratory of a difference in the speed of symptom progression in two MND models carrying the same gene mutation and the successful collaboration with Professor Pamela Shaw and her team, we have identified some mechanisms that may help to predict the disease duration and eventually to slow it down.

“I strongly believe that the new hypotheses generated by this study and our ongoing collaboration are the prerequisites to be able to fight this disease.”

Brian Dickie from MND Association added: “These new and important findings in mice open up the possibility for new treatment approaches in man. It is heartening to see such a productive collaboration between two of the leading MND research labs in Europe, combining their unique specialist knowledge and technical expertise in the fight against this devastating disease.”

MND affects more than 6,000 sufferers in the UK with the majority of cases being sporadic but approximately five per cent of cases are familial or inherited with an identifiable genetic cause. Sufferers may lose their ability to walk, talk, eat and breathe.

Notes about this neurology and motor neuron disease research