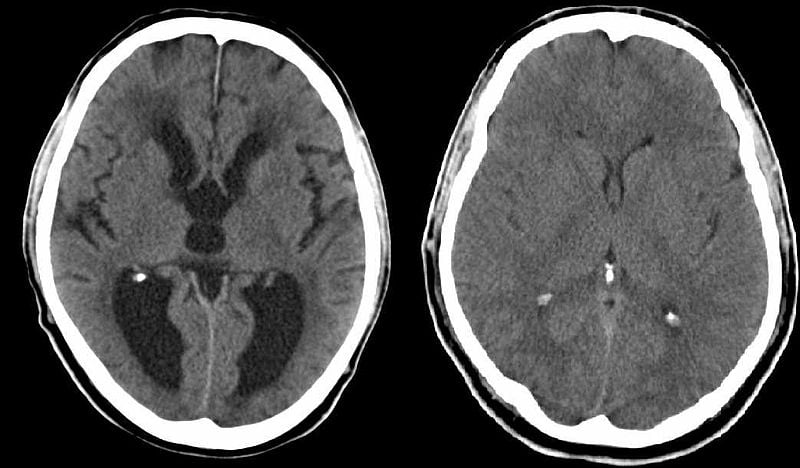 When administered directly into the brain over two weeks, the drug Decorin stopped the development of hydrocephalus. This image is a CT scan of a person with hydrocephalus.
Home
Featured

New Hope for Premature Babies at Risk of Brain Damage

Babies who suffer a bleed on their brain could be saved from debilitating brain damage after researchers at the University of Birmingham found that a new drug can prevent the swelling of the organ which causes it.

The researchers found that Decorin, a drug which has been shown to have anti-scarring properties, prevented hydrocephalus – the swelling of the brain – in juvenile rats, opening up the possibility of it as a treatment for the severe condition, which, until now, has only had surgery available as a treatment.

Several hundred newborn babies each year suffer a brain haemorrhage at birth, which then usually leads to hydrocephalus – where cerebrospinal fluid (CSF) cannot drain away from the organ due to a build up of tissue – which has grave consequences. CSF is produced constantly inside the brain and normally, will drain away into the bloodstream. Premature babies are at particular risk, as there will be increased blood vessel activity in their brains, which are still being formed and are fragile to any sudden changes in pressure. Following the bleed, a clot may form, obstructing the drainage of CSF and leading to hydrocephalus.

If left untreated, hydrocephalus can lead to or severe and debilitating brain damage, affecting all aspects of development, including speech, physical co-ordination and learning.

The only treatment to date for newborns who suffer a bleed on the brain is to insert a drain, known as a shunt, down into their abdomen to drain the excess fluid back into the bloodstream. However, the shunt, which is permanent, often becomes obstructed or infected, which can then lead to the same symptoms as hydrocephalus itself.

The University of Birmingham team showed that when Decorin was administered directly into the brain over a period of two weeks in experimental models of hydrocephalus, it stopped the development of hydrocephalus.

The drug works by blocking a cytokine which is known to promote cell proliferation and fibrogenic growth – a build up of tissue which then causes the swelling of the brain seen in children with hydrocephalus – thus preventing against brain damage.

Professor Ann Logan, Professor of Molecular Neuroscience at the University of Birmingham, led the research. She said: “The discovery that this drug can prevent hydrocephalus in experimental models is hugely exciting, as it paves the way for us to develop new treatments for babies with this devastating condition.”

Forecasting the Risks of Brain Surgery

The work is now ready for further development by Prof Logan’s research team through the NIHR Surgical Reconstruction and Microbiology Research Centre and the Healthcare Technology Cooperative in Trauma Management at the Queen Elizabeth Hospital in Birmingham.

Notes about this neurodevelopment and neurology research

The research, Decorin prevent the development of juvenile communicating hydrocephalus, is published in the October edition of Brain, and was part funded by the BBSRC.