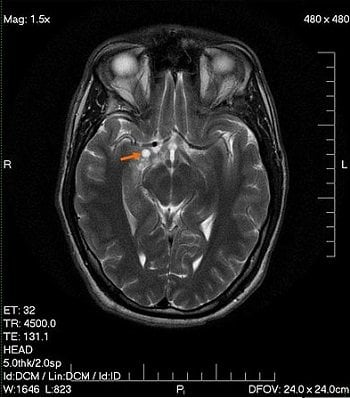 Researchers discovered the mTOR pathway was highly active in pediatric low grade gliomas. They also found mTOR activity could be blocked using an experimental drug. Blocking the activity lead to a decrease in the growth of these tumors. Credit provided below.
Home
Brain Cancer

Common Genetic Pathway Could be Conduit to Pediatric Tumor Treatment

Investigators at Johns Hopkins have found a known genetic pathway to be active in many difficult-to-treat pediatric brain tumors called low-grade gliomas, potentially offering a new target for the treatment of these cancers.

In laboratory studies, researchers found that the pathway, called mammalian target of rapamycin (mTOR), was highly active in pediatric low-grade gliomas, and that mTOR activity could be blocked using an experimental drug, leading to decreased growth of these tumors.

“We think mTOR could function as an Achilles heel,” says study co-author Eric Raabe, M.D., Ph.D., an assistant professor of pediatrics, oncology and pathology at the Johns Hopkins Kimmel Cancer Center. “It drives cancer growth, but when mTOR is inhibited, the tumor falls apart.” The work was described Nov. 7 in the journal Neuro-Oncology.

Overall, brain tumors affect more than 4,000 children each year in the U.S., and they are the leading cause of cancer deaths in children, according to Raabe. Low-grade gliomas are the most common group of tumors of the central nervous system in children. Current treatments for these tumors include surgery and chemotherapy, which often cause significant side effects. Many of these tumors are located in areas like the optic pathway, where they can’t be easily removed by surgery without causing damage, including blindness. In addition to vision loss, some of Raabe’s patients have endured paralysis or learning problems as a result of the tumor or treatment. “Even though these tumors are considered ‘low grade’ and not particularly aggressive, many patients suffer severe, life-altering symptoms, so we desperately need better therapies,” says Raabe.

For the study, the Johns Hopkins investigators studied tissue samples from 177 pediatric low-grade gliomas, including the most common type — tumors called pilocytic astrocytomas — from patients treated at Johns Hopkins and other centers. They also tested the effect of blocking mTOR with an investigational agent known as MK8669 (ridaforolimus) in two pediatric low-grade glioma cell lines.

The mTOR pathway has been shown to be active in a variety of cancers, and drugs that block proteins in the pathway, such as rapamycin, are widely available. The pathway signals through two protein complexes, mTORC1 and mTORC2, which lead to increased cell growth and survival.

The researchers found activity of the mTORC1 pathway in 90 percent of low-grade gliomas studied, and 81 percent of tumors showed activity of both mTORC1 and mTORC2. Components of the mTOR pathway were more commonly found in tumors from optic pathways compared with those from other areas of the brain, according to Fausto Rodriguez , M.D., senior study author and assistant professor of pathology and oncology at Johns Hopkins.

“Since the pathways are more active in some areas of the brain, compared with others, it suggests that the outcomes of drug treatments targeting those pathways may differ as well,” says Rodriguez.

Rodriguez and Raabe say they hope to build on the research in animal models and test additional inhibitors.

Introducing a Protocol for Using Robotic Pets in Memory Care