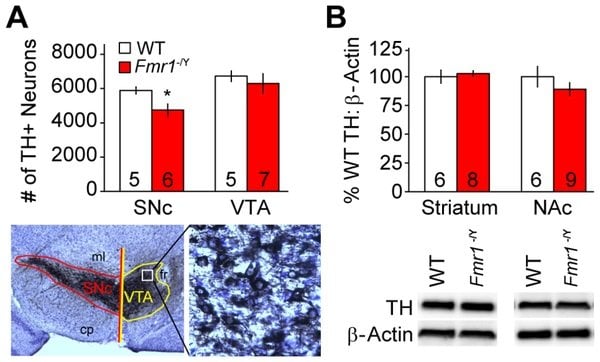 When you experience something, neurons in the brain send chemical signals called neurotransmitters across synapses to receptors on other neurons. How well that process unfolds determines how you comprehend the experience and what behaviors might follow. In people with Fragile X syndrome, a third of whom are eventually diagnosed with Autism Spectrum Disorder, that process is severely hindered, leading to intellectual impairments and abnormal behaviors.

In a study published in the online journal PLoS One, a team of UNC School of Medicine researchers led by pharmacologist C.J. Malanga, MD, PhD, describes a major reason why current medications only moderately alleviate Fragile X symptoms. Using mouse models, Malanga discovered that three specific drugs affect three different kinds of neurotransmitter receptors that all seem to play roles in Fragile X. As a result, current Fragile X drugs have limited benefit because most of them only affect one receptor.

Nearly one million people in the United States have Fragile X Syndrome, which is the result of a single mutated gene called FMR1. In people without Fragile X, the gene produces a protein that helps maintain the proper strength of synaptic communication between neurons. In people with Fragile X, FMR1 doesn’t produce the protein, the synaptic connection weakens, and there’s a decrease in synaptic input, leading to mild to severe learning disabilities and behavioral issues, such as hyperactivity, anxiety, and sensitivity to sensory stimulation, especially touch and noise.

More than two decades ago, researchers discovered that – in people with mental and behavior problems – a receptor called mGluR5 could not properly regulate the effect of the neurotransmitter, glutamate. Since then, pharmaceutical companies have been trying to develop drugs that target glutamate receptors. “It’s been a challenging goal,” Malanga said. “No one so far has made it work very well, and kids with Fragile X have been illustrative of this.”

But there are other receptors that regulate other neurotransmitters in similar ways to mGluR5. And there are drugs already available for human use that act on those receptors. So Malanga’s team checked how those drugs might affect mice in which the Fragile X gene has been knocked out.

By electrically stimulating specific brain circuits, Malanga’s team first learned how the mice perceived reward. The mice learned very quickly that if they press a lever, they get rewarded via a mild electrical stimulation. Then his team provided a drug molecule that acts on the same reward circuitry to see how the drugs affect the response patterns and other behaviors in the mice.

“Turns out, based on our study and a previous study we did with my UNC colleague Ben Philpot, that Fragile X mice and Angelman Syndrome mice are very different,” Malanga said. “And how the same pharmaceuticals act in these mouse models of Autism Spectrum Disorder is very different.”

Malanga’s finding suggests that not all people with Fragile X share the same biological hurdles. The same is likely true, he said, for people with other autism-related disorders, such as Rett syndrome and Angelman syndrome.

“Fragile X kids likely have very different sensitivities to prescribed drugs than do other kids with different biological causes of autism,” Malanga said.

Notes about this Fragile X and Autism research