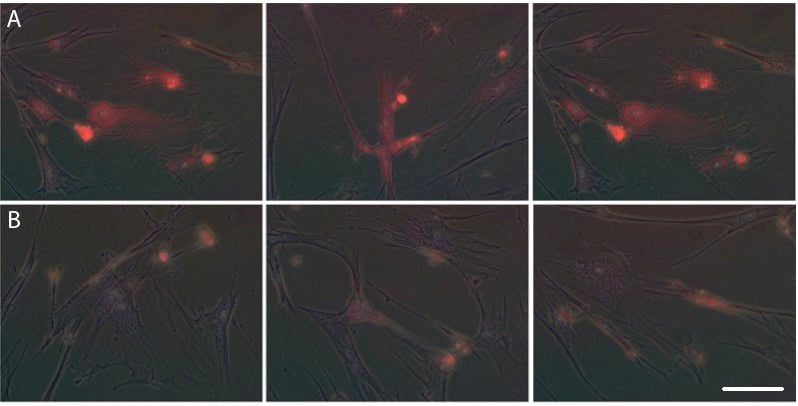 Panel A, Autofluorescence was observed in the cytosol and perinuclear regions of MRC-5 cells incubated with 300 µM BMAA. Panel B, autofluorescence was reduced when cells were co-incubated with 300 µM L-serine. Cells were incubated in 6 well plates and showed consistent perinuclear and cytosolic autofluorescence of varying degrees of intensity in BMAA treated cultures. The overall intensity of the signal was reduced when cells were co-incubated with L-serine. Images are representative of at least 12 fields of view from triplicate cultures. Scale bar is 100 um. Credited to Rachael Anne Dunlop, Paul Alan Cox, Sandra Anne Banack, Kenneth John Rodgers via PLOS ONE.
Home
Featured

New Mechanism for Protein Misfolding Could Link to ALS

Brain diseases such as ALS, Alzheimer’s, and Parkinson’s are known as “tangle diseases” because they are characterized by misfolded and tangled proteins which accumulate in the brain.

A team of Australian and American scientists discovered that an unusual amino acid called BMAA can be inserted into neuroproteins, causing them to misfold and aggregate. BMAA is produced by cyanobacteria, photosynthetic bacteria that form scums or mats in polluted lakes or estuaries.

BMAA has been detected in the brain tissues of ALS patients.

In an article published in PLOS ONE scientists at the University of Technology Sydney and the Institute for Ethnomedicine in Jackson Hole, Wyoming, report that BMAA mimics a dietary aminoacid, L-Serine, and is mistakenly incorporated into neuroproteins, causing the proteins to misfold. The misfolded proteins build up in cells, eventually killing them.

“We found that BMAA inserts itself by seizing the transfer RNA for L-Serine. This, in essence, puts a kink in the protein causing it to misfold,” says lead author Dr. Rachael Dunlop, a cell biologist in Sydney working in the laboratory of Dr. Ken Rodgers.

“The cells then begin programmed cell death, called apoptosis. “Even more importantly, the scientists found that extra L-Serine added to the cell culture can prevent the insertion of BMAA into neuroproteins. The possibility that L-Serine could be used to prevent or slow ALS is now being studied.”

Even though L-serine occurs in our diet, its safety and efficacy for ALS patients should be properly determined through FDA-approved clinical trials before anyone advocates its use,” says American co-author Dr. Paul Cox.

In ALS, motor neurons in the brain and spinal cord die, progressively paralyzing the body until even swallowing and breathing becomes impossible.

The disease is relatively rare but has affected a number of high-profile people including Professor Stephen Hawking and Yankee baseball player Lou Gehrig.

“For many years scientists have linked BMAA to an increased risk of motor neuron disease but the missing pieces of the puzzle relate to how this might occur. Finally, we have one of those pieces,” said Dr Sandra Banack, a co-author on the paper.

Notes about this ALS and neurodegenerative disease research