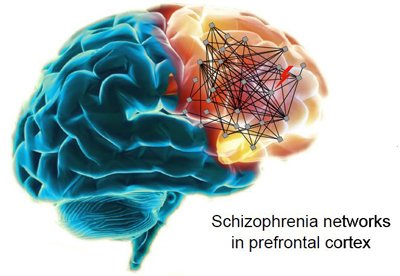 Researchers have reverse-engineered the outlines of a disrupted prenatal gene network in schizophrenia, by tracing spontaneous mutations to where and when they likely cause damage in the brain. Some people with the brain disorder may suffer from impaired birth of new neurons, or neurogenesis, in the front of their brain during prenatal development, suggests the study, which was funded by the National Institutes of Health.

“Processes critical for the brain’s development can be revealed by the mutations that disrupt them,” explained Mary-Claire King, Ph.D. External Web Site Policy, University of Washington (UW), Seattle, a grantee of NIH’s National Institute of Mental Health (NIMH). “Mutations can lead to loss of integrity of a whole pathway, not just of a single gene. Our results implicate networked genes underlying a pathway responsible for orchestrating neurogenesis in the prefrontal cortex in schizophrenia.”

King, and collaborators at UW and seven other research centers participating in the NIMH genetics repository, report on their discovery Aug. 1, 2013 in the journal Cell.

“By linking genomic findings to functional measures, this approach gives us additional insight into how early development differs in the brain of someone who will eventually manifest the symptoms of psychosis,” said NIMH Director Thomas R. Insel, M.D.

Earlier studies had linked spontaneous mutations to non-familial schizophrenia and traced them broadly to genes involved in brain development, but little was known about convergent effects on pathways. King and colleagues set out to explore causes of schizophrenia by integrating genomic data with newly available online transcriptome resources that show where in the brain and when in development genes turn on. They compared spontaneous mutations in 105 people with schizophrenia with those in 84 unaffected siblings, in families without previous histories of the illness.

Unlike most other genes, expression levels of many of the 50 mutation-containing genes that form the suspected network were highest early in fetal development, tapered off by childhood, but conspicuously increased again in early adulthood – just when schizophrenia symptoms typically first develop. This adds to evidence supporting the prevailing neurodevelopmental model of schizophrenia. The implicated genes play important roles in migration of cells in the developing brain, communication between brain cells, regulation of gene expression, and related intracellular workings.

When the researchers compared such network connectivity across different brain tissues and different periods of development, they discovered a notable difference between affected and unaffected siblings: Genes harboring damaging mutations that are expressed together in the fetal prefrontal cortex of people with schizophrenia formed a network with significantly greater connectivity than networks modeled from genes harboring similar mutations in their unaffected siblings at that time in development.

The study results are consistent with several lines of evidence implicating the prefrontal cortex in schizophrenia. The prefrontal cortex organizes information from other brain regions to coordinate executive functions like thinking, planning, attention span, working memory, problem-solving, and self-regulation. The findings suggest that impairments in such functions — often beginning before the onset of symptoms in early adulthood, when the prefrontal cortex fully matures – appear to be early signs of the illness.

The study demonstrates how integrating genomic data and transcriptome analysis can help to pinpoint disease mechanisms and identify potential treatment targets. For example, the mutant genes in the patients studied suggest the possible efficacy of medications targeting glutamate and calcium channel pathways, say the researchers.

“These results are striking, as they show that the genetic architecture of schizophrenia cannot be understood without an appreciation of how genes work in temporal and spatial networks during neurodevelopment,” said Thomas Lehner, Ph.D., chief of the NIMH Genomics Research Branch.

Notes about this neurogenetics and schizophrenia research