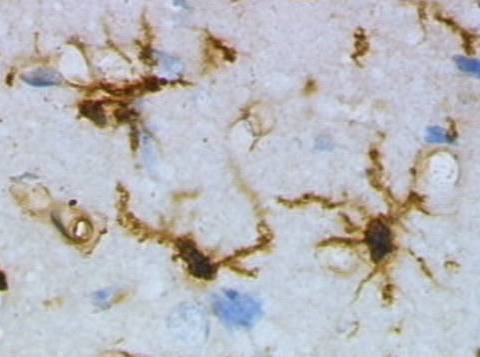 Microglia are known to constantly survey their environment in order to sense the presence of infection, inflammation, and injured or dying cells. Depending on the situation they encounter, microglia may react in a protective manner, engulfing pathogenic organisms, toxins or damaged cells, or release toxic substances that directly destroy microbes or infected brain cells. The image, which is for illustrative purposes only, shows Microglia cells positive for lectins (brown). Credit provided below.
Home
Featured

Massachusetts General Hospital (MGH) investigators have used a new sequencing method to identify a group of genes used by the brain’s immune cells – called microglia – to sense pathogenic organisms, toxins or damaged cells that require their response. Identifying these genes should lead to better understanding of the role of microglia both in normal brains and in neurodegenerative disorders and may lead to new ways to protect against the damage caused by conditions like Alzheimer’s and Parkinson’s diseases. The study, which has been published online in Nature Neuroscience, also finds that the activity of microglia appears to become more protective with aging, as opposed to increasingly toxic, which some previous studies had suggested.

“We’ve been able to define, for the first time, a set of genes microglia use to sense their environment, which we are calling the microglial sensome,” says Joseph El Khoury, MD, of the MGH Center for Immunology and Inflammatory Diseases and Division of Infectious Diseases, senior author of the study. “Identifying these genes will allow us to specifically target them in diseases of the central nervous system by developing ways to upregulate or downregulate their expression.”

A type of macrophage, microglia are known to constantly survey their environment in order to sense the presence of infection, inflammation, and injured or dying cells. Depending on the situation they encounter, microglia may react in a protective manner – engulfing pathogenic organisms, toxins or damaged cells – or release toxic substances that directly destroy microbes or infected brain cells. Since this neurotoxic response can also damage healthy cells, keeping it under control is essential, and excess neurotoxicity is known to contribute to the damage caused by several neurodegenerative disorders.

El Khoury’s team set out to define the transcriptome – the complete set of RNA molecules transcribed by a cell – of the microglia of healthy, adult mice and compared that expression profile to those of macrophages from peripheral tissues of the same animals and of whole brain tissue. Using a technique called direct RNA sequencing, which is more accurate than previous methods, they identified a set of genes uniquely expressed in the microglia and measured their expression levels, the first time such a gene expression ‘snapshot’ has been produced for any mammalian brain cell, the authors note.

Since aging is known to alter gene expression throughout the brain, the researchers then compared the sensome of young adult mice to that of aged mice. They found that – contrary to what previous studies had suggested – the expression of genes involved in potentially neurotoxic actions, such as destroying neurons, was downregulated as animals aged, while the expression of neuroprotective genes involved in sensing and removing pathogens was increased. El Khoury notes that the earlier studies suggesting increased neurotoxicity with aging did not look at the cells’ full expression profile and often were done in cultured cells, not in living animals.

“Establishing the sensome of microglia allows us to clearly understand how they interact with and respond to their environment under normal conditions,” he explains. “The next step is to see what happens under pathologic conditions. We know that microglia become more neurotoxic as Alzheimer’s disease and other neurodegenerative disorders progress, and recent studies have identified two of the microglial sensome genes as contributing to Alzheimer’s risk. Our next steps should be defining the sensome of microglia and other brain cells in humans, identifying how the sensome changes in central nervous system disorders, and eventually finding ways to safely manipulate the sensome pharmacologically.”