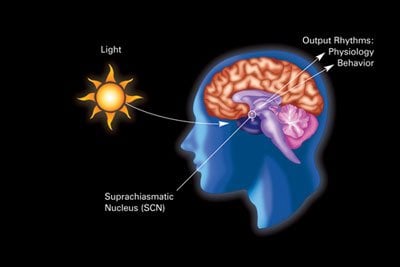 Researchers found the mice lacking circadian clocks had defects in their mitochondria: the mitochondria could not metabolize stored energy and had no reserve to prevent depletion of the main currency, ATP. The diagram illustrates the influence of dark-light rhythms on circadian rhythms and related physiology and behavior.
Home
Featured

Inside each of us is our own internal timing device. It drives everything from sleep cycles to metabolism, but the inner-workings of this so-called “circadian clock” are complex, and the molecular processes behind it have long eluded scientists. But now, researchers at the Gladstone Institutes have discovered how one important protein falls under direct instructions from the body’s circadian clock. Furthermore, they uncover how this protein regulates fundamental circadian processes—and how disrupting its normal function can throw this critical system out of sync.

In the latest issue of the Journal of Neuroscience, Gladstone Investigator Katerina Akassoglou, PhD, and her team reveal in animal models how the production of the p75 neurotrophin receptor (p75NTR) protein oscillates in time with the body’s natural circadian clock—and how these rhythmic oscillations help regulate vital metabolic functions. This discovery underscores the widespread importance of p75NTR by offering insight into how the circadian clock helps maintain the body’s overall metabolic health.

Virtually every organism on the planet—from bacteria to humans—has a circadian clock, a biological timing mechanism that oscillates with a period of about 24 hours and is coordinated with the cycle of day and night. And while it runs independent of external cues, it is influenced by the rhythms of light, temperature and food availability. Intriguingly, recent studies have also found a link between circadian clocks and metabolism.

“Important metabolic functions are also heavily influenced by circadian clocks, which is why activities such as chronic night-shift work—which can cause a misalignment of this clock—increase one’s risk for metabolic and autoimmune diseases such as obesity, Type 2 diabetes, cancer and multiple sclerosis,” said Dr. Akassoglou. Dr. Akassoglou is also a professor of neurology at the University of California, San Francisco, (UCSF) with which Gladstone is affiliated. “In this study, we pinpointed p75NTR as an important molecular ‘link’ between circadian clocks and metabolic health.”

Originally, p75NTR was only thought to be active in the nervous system. Later studies found it to be active in many cell types throughout the body, suggesting that it impacts a variety of biological functions. Last year, Gladstone researchers discovered that p75NTR was present in the liver and in fat cells, and that it regulates glucose levels in the blood—an important metabolic process. Since these findings uncovered a link between p75NTR and metabolism, the research team tested—first in a petri dish and then in animal models—whether there was also a link between p75NTR and the circadian clock.

The team focused on two genes called Clock and Bmal1. These so-called “circadian regulator genes,” and others like them, are found throughout the body. Their activity controls the body’s circadian clock. The researchers wanted to see if there was a connection between these circadian genes and p75NTR.

“Our initial experiments revealed such a connection,” recalls Gladstone Postdoctoral Fellow Bernat Baeza-Raja, PhD, the paper’s lead author. “In individual cells, we saw that p75NTR production was controlled by Clock and Bmal1, which bind directly to the gene that codes for the p75NTR and start production of the protein.”

But perhaps even more important than how p75NTR was produced was when. The team found that p75NTR production, like the circadian clock genes themselves, oscillated in a 24-hour cycle—in sync with the cells’ natural circadian rhythm. Experiments in mouse models further supported these findings.

And when the team genetically modified a group of mice so that it lacked the circadian Clock gene, everything else fell out of sync. The circadian oscillation of p75NTR production was disrupted, and p75NTR levels dropped.

However, what was most fascinating, say the researchers, was how a drop in p75NTR levels then affected a variety of circadian clock systems. Specifically, the regular oscillations of other circadian genes in the brain and the liver became disrupted, as well as genes known to regulate glucose and lipid metabolism.

“The finding that a loss of p75NTR affected circadian and metabolic systems is strong evidence that this protein is intricately tied to both,” said Life Sciences Institute Director Alan Saltiel, PhD, who is also a professor at the University of Michigan and was not involved in the study. “It will be fascinating to see what additional insight Dr. Akassoglou and her team will uncover as they continue to examine the role of p75NTR in circadian clocks and metabolic function.”

“While these findings reveal p75NTR to be an important link between circadian clocks and metabolism, the system is complex, and there are likely other factors at play,” said Dr. Akassoglou. “We are currently working to identify the relationship between the circadian clock, metabolism and the immune system, so that one day we could develop therapies to treat diseases influenced by circadian clock disruption—including not only obesity and diabetes, but also potentially multiple sclerosis and even Alzheimer’s disease.”

Notes about this neurogenetics and circadian rhythm research

Eirini Vagena also participated in this research at Gladstone, which was supported by the Spanish Ministry of Education and Science, the UCSF Liver Center, the UCSF Diabetes and Endocrinology Center and the National Institutes of Health.

Contact: Anne Holden – Gladstone Institute
Source: Gladstone Institute press release
Image Source: The Circadian clock image is credited to the NIH and is in the public domain.
Original Research: The research will be published in the Journal of Neuroscience. We will update with a link to the research and doi when available.