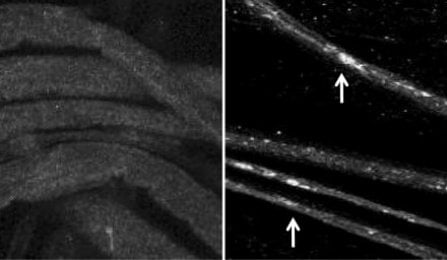 Materials move smoothly through the brain cells of a fruit fly larvae (left). But when scientists reduced the levels of the protein presenilin and the enzyme GSK-3B present in the nerve, tiny organic bubbles called vesicles began moving in an uncoordinated fashion and became trapped (right). Credited to Shermali Gunawardena/UB.
Home
Featured

Study shows how the wrong levels of a protein linked with Alzheimer’s disease can lead to dangerous blockages in brain cells.

Scientists have known for some time that a protein called presenilin plays a role in Alzheimer’s disease, and a new study reveals one intriguing way this happens.

It has to do with how materials travel up and down brain cells, which are also called neurons.

In an Oct. 8 paper in Human Molecular Genetics, University at Buffalo researchers report that presenilin works with an enzyme called GSK-3ß to control how fast materials — like proteins needed for cell survival — move through the cells.

“If you have too much presenilin or too little, it disrupts the activity of GSK-3ß, and the transport of cargo along neurons becomes uncoordinated,” says lead researcher Shermali Gunawardena, PhD, an assistant professor of biological sciences at UB. “This can lead to dangerous blockages.”

More than 150 mutations of presenilin have been found in Alzheimer’s patients, and scientists have previously shown that the protein, when defective, can cause neuronal blockages by snipping another protein into pieces that accumulate in brain cells.

But this well-known mechanism isn’t the only way presenilin fuels disease, as Gunawardena’s new study shows.

“Our work elucidates how problems with presenilin could contribute to early problems observed in Alzheimer’s disease,” she says. “It highlights a potential pathway for early intervention through drugs — prior to neuronal loss and clinical manifestations of disease.”

The study suggests that presenilin activates GSK-3ß. This is an important finding because the enzyme helps control the speed at which tiny, organic bubbles called vesicles ferry cargo along neuronal highways. (You can think of vesicles as trucks, each powered by little molecular motors called dyneins and kinesins.)

When researchers lowered the amount of presenilin in the neurons of fruit fly larvae, less GSK-3ß became activated and vesicles began speeding along cells in an uncontrolled manner.

Decreasing levels of both presenilin and GSK-3ß at once made things worse, resulting in “traffic jams” as the bubbles got stuck in neurons.

“Both GSK-3ß and presenilin have been shown to be involved in Alzheimer’s disease, but how they are involved has not always been clear,” Gunawardena says. “Our research provides new insight into this question.”

Gunawardena proposes that GSK-3ß — short for glycogen synthase kinase-3beta — acts as an “on switch” for dynein and kynesin motors, telling them when to latch onto vesicles.

Dyneins carry vesicles toward the cell nucleus, while kinesins move in the other direction, toward the periphery of the cell. When all is well and GSK-3ß levels are normal, both types of motors bind to vesicles in carefully calibrated numbers, resulting in smooth traffic flow along neurons.

That’s why it’s so dangerous when GSK-3ß levels are off-kilter, she says.

When GSK-3ß levels are high, too many motors attach to the vesicles, leading to slow movement as motor activity loses coordination. Low GSK-3ß levels appear to have the opposite effect, causing fast, uncontrolled movement as too few motors latch onto vesicles.

Both scenarios — too much GSK-3ß or too little — can result in neuronal blockages.

The study appeared online in Human Molecular Genetics on Oct. 8 and will be published in a forthcoming print edition of the journal. Funding for the research came from the John R. Oishei Foundation, a Fulbright Scholarship and fellowships from the University at Buffalo Center for Undergraduate Research and Creative Activities.