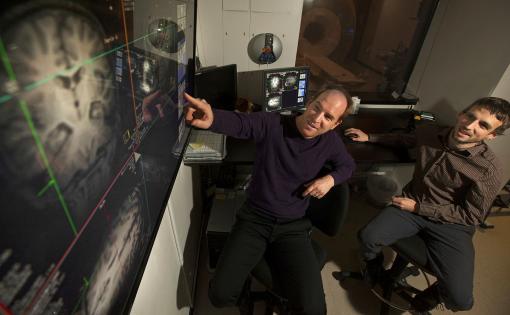 Language ability is usually located in the left side of the brain. Researchers studying brain development in young children who were acquiring language expected to see increasing levels of myelin, a nerve fiber insulator, on the left side. They didn’t: The larger myelin structure was already there. Their study underscores the importance of environment in language development.

Their study, published in the Journal of Neuroscience, found that the explosion of language acquisition that typically occurs in children between 2 and 4 years old is not reflected in substantial changes in brain asymmetry. Structures that support language ability tend to be localized on the left side of the brain. For that reason, the researchers expected to see more myelin — the fatty material that insulates nerve fibers and helps electrical signals zip around the brain — developing on the left side in children entering the critical period of language acquisition. But that is not what the research showed.

“What we actually saw was that the asymmetry of myelin was there right from the beginning, even in the youngest children in the study, around the age of 1,” said the study’s lead author, Jonathan O’Muircheartaigh, the Sir Henry Wellcome Postdoctoral Fellow at King’s College London. “Rather than increasing, those asymmetries remained pretty constant over time.”

That finding, the researchers say, underscores the importance of environment during this critical period for language.

O’Muircheartaigh is currently working in Brown University’s Advanced Baby Imaging Lab. The lab uses a specialized MRI technique to look at the formation of myelin in babies and toddlers. Babies are born with little myelin, but its growth accelerates rapidly in the first few years of life.

The researchers imaged the brains of 108 children between ages 1 and 6, looking for myelin growth in and around areas of the brain known to support language.

While asymmetry in myelin remained constant over time, the relationship between specific asymmetries and language ability did change, the study found. To investigate that relationship, the researchers compared the brain scans to a battery of language tests given to each child in the study. The comparison showed that asymmetries in different parts of the brain appear to predict language ability at different ages.

“Regions of the brain that weren’t important to successful language in toddlers became more important in older children, about the time they start school,” O’Muircheartaigh said. “As language becomes more complex and children become more proficient, it seems as if they use different regions of the brain to support it.”

Interestingly, the association between asymmetry and language was generally weakest during the critical language period.

“We found that between the ages of 2 and 4, myelin asymmetry doesn’t predict language very well,” O’Muircheartaigh said. “So if it’s not a child’s brain anatomy predicting their language skills, it suggests their environment might be more influential.”

The researchers hope this study will provide a helpful baseline for future research aimed at pinpointing brain structures that might predict developmental disorders.

Speech as a New Diagnostic Tool in ALS and FTD

“Disorders like autism, dyslexia, and ADHD all have specific deficits in language ability,” O’Muircheartaigh said. “Before we do studies looking at abnormalities we need to know how typical children develop. That’s what this study is about.”

“This work is important, as it is the first to investigate the relationship between brain structure and language across early childhood and demonstrate how this relationship changes with age,” said Sean Deoni, assistant professor of engineering, who oversees the Advanced Baby Imaging Lab. “The study highlights the advantage of collaborative work, combining expertise in pediatric imaging at Brown and neuropsychology from the King’s College London Institute of Psychiatry, making this work possible.”

Notes about this neuroanatomy and developmental neuroscience research

Other authors on the paper include Douglas Dean, Holly Dirks, Nicole Waskiewicz, and Katie Lehman from Brown’s Baby Imaging Lab, and Beth Jerskey from Brown’s Alpert Medical School. The work was funded by the National Institutes of Mental Health and the Wellcome Trust.