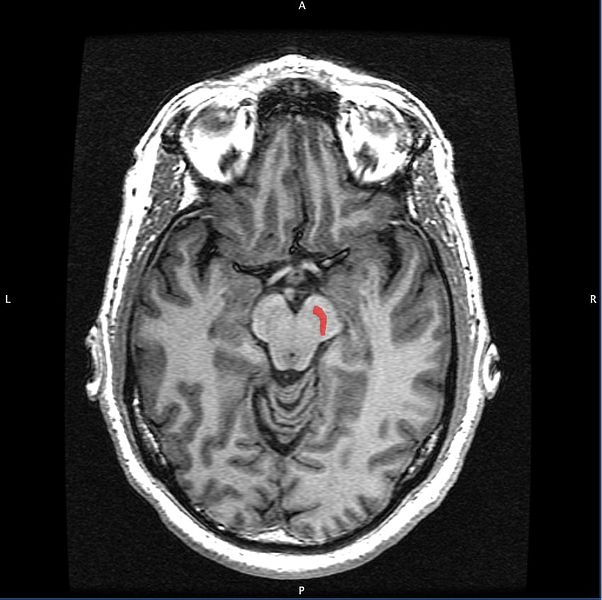 Parkinson's disease symptoms are caused by the loss of neurons in the substantia nigra, an area of the brain which usually supplies dopamine to other regions which regulate muscle movements. This brain scan image highlights the location of the substantia nigra in red.
Home
Featured

Biologists at The Scripps Research Institute (TSRI) have made a significant discovery that could lead to a new therapeutic strategy for Parkinson’s disease.

The findings, recently published online ahead of print in the journal Molecular and Cell Biology, focus on an enzyme known as parkin, whose absence causes an early-onset form of Parkinson’s disease. Precisely how the loss of this enzyme leads to the deaths of neurons has been unclear. But the TSRI researchers showed that parkin’s loss sharply reduces the level of another protein that normally helps protect neurons from stress.

“We now have a good model for how parkin loss can lead to the deaths of neurons under stress,” said TSRI Professor Steven I. Reed, who was senior author of the new study. “This also suggests a therapeutic strategy that might work against Parkinson’s and other neurodegenerative diseases.”

Parkinson’s is the world’s second-most common neurodegenerative disease, affecting about one million people in the United States alone. The disease is usually diagnosed after the appearance of the characteristic motor symptoms, which include tremor, muscle rigidity and slowness of movements. These symptoms are caused by the loss of neurons in the substantia nigra, a brain region that normally supplies the neurotransmitter dopamine to other regions that regulate muscle movements.

Most cases of Parkinson’s are considered “sporadic” and are thought to be caused by a variable mix of factors including advanced age, subtle genetic influences, chronic neuroinflammation and exposure to pesticides and other toxins. But between 5 and 15 percent of cases arise specifically from inherited gene mutations. Among these, mutations to the parkin gene are relatively common. Patients who have no functional parkin gene typically develop Parkinson’s-like symptoms before age 40.

Parkin belongs to a family of enzymes called ubiquitin ligases, whose main function is to regulate the levels of other proteins. They do so principally by “tagging” their protein targets with ubiquitin molecules, thus marking them for disposal by roving protein-breakers in cells known as proteasomes. Because parkin is a ubiquitin ligase, researchers have assumed that its absence allows some other protein or proteins to evade proteasomal destruction and thus accumulate abnormally and harm neurons. But since 1998, when parkin mutations were first identified as a cause of early-onset Parkinson’s, consensus about the identity of this protein culprit has been elusive.

“There have been a lot of theories, but no one has come up with a truly satisfactory answer,” Reed said.

In 2005, Reed and his postdoctoral research associate (and wife) Susanna Ekholm-Reed decided to investigate a report that parkin associates with another ubiquitin ligase known as Fbw7. “We soon discovered that parkin regulates Fbw7 levels by tagging it with ubiquitin and thus targeting it for degradation by the proteasome,” said Ekholm-Reed.

Loss of parkin, they found, leads to rises in Fbw7 levels, specifically for a form of the protein known as Fbw7β. The scientists observed these elevated levels of Fbw7β in embryonic mouse neurons from which parkin had been deleted, in transgenic mice that were born without the parkin gene, and even in autopsied brain tissue from Parkinson’s patients who had parkin mutations.

Subsequent experiments showed that when neurons are exposed to harmful molecules known as reactive oxygen species, parkin appears to work harder at tagging Fbw7β for destruction, so that Fbw7β levels fall. Without the parkin-driven decrease in Fbw7β levels, the neurons become more sensitive to this “oxidative stress”—so that more of them undergo a programmed self-destruction called apoptosis. Oxidative stress, to which dopamine-producing substantia nigra neurons may be particularly vulnerable, has long been considered a likely contributor to Parkinson’s.

“We realized that there must be a downstream target of Fbw7β that’s important for neuronal survival during oxidative stress,” said Ekholm-Reed.

The research slowed for a period due to a lack of funding. But then, in 2011, came a breakthrough. Other researchers who were investigating Fbw7’s role in cancer reported that it normally tags a cell-survival protein called Mcl-1 for destruction. The loss of Fbw7 leads to rises in Mcl-1, which in turn makes cells more resistant to apoptosis. “We were very excited about that finding,” said Ekholm-Reed. The TSRI lab’s experiments quickly confirmed the chain of events in neurons: parkin keeps levels of Fbw7β under control, and Fbw7β keeps levels of Mcl-1 under control. Full silencing of Mcl-1 leaves neurons extremely sensitive to oxidative stress.

Members of the team suspect that this is the principal explanation for how parkin mutations lead to Parkinson’s disease. But perhaps more importantly, they believe that their discovery points to a broad new “neuroprotective” strategy: reducing the Fbw7β-mediated destruction of Mcl-1 in neurons, which should make neurons more resistant to oxidative and other stresses.

“If we can find a way to inhibit Fbw7β in a way that specifically raises Mcl-1 levels, we might be able to prevent the progressive neuronal loss that’s seen not only in Parkinson’s but also in other major neurological diseases, such as Huntington’s disease and ALS [amyotrophic lateral sclerosis],” said Reed.

Finding such an Mcl-1-boosting compound, he added, is now a major focus of his laboratory’s work.

Authors of the study, “Parkin-Dependent Degradation of the F-box protein Fbw7 β Promotes Neuronal Survival in Response to Oxidative stress by Stabilizing Mcl-1,” include Matthew S. Goldberg of The University of Texas Southwestern Medical Center at Dallas and Michael G. Schlossmacher of the University of Ottawa.

Funding for the study was provided in part by the National Institutes of Health (NS059904 and CA078343).

Cannabis Reduces OCD Symptoms by Half in the Short-Term