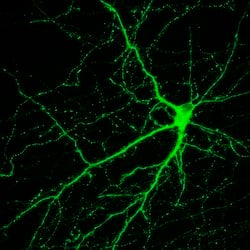 This neuron, created in the Su-Chun Zhang lab at the University of Wisconsin–Madison, makes dopamine, a neurotransmitter involved in normal movement. The cell originated in an induced pluripotent stem cell, which derive from adult tissues. Similar neurons survived and integrated normally after transplant into monkey brains—as a proof of principle that personalized medicine may one day treat Parkinson’s disease.Credited to Yan Liu and Su-Chun Zhang, Waisman Center University of Wisconsin Madison.
Home
Featured

For the first time, scientists have transplanted neural cells derived from a monkey’s skin into its brain and watched the cells develop into several types of mature brain cells, according to the authors of a new study in Cell Reports. After six months, the cells looked entirely normal, and were only detectable because they initially were tagged with a fluorescent protein.

Because the cells were derived from adult cells in each monkey’s skin, the experiment is a proof-of-principle for the concept of personalized medicine, where treatments are designed for each individual.

And since the skin cells were not “foreign” tissue, there were no signs of immune rejection, potentially a major problem with cell transplants. “When you look at the brain, you cannot tell that it is a graft,” says senior author Su-Chun Zhang, a professor of neuroscience at the University of Wisconsin-Madison. “Structurally the host brain looks like a normal brain; the graft can only be seen under the fluorescent microscope.”

Marina Emborg, an associate professor of medical physics at UW-Madison and the lead co-author of the study, says, “This is the first time I saw, in a nonhuman primate, that the transplanted cells were so well integrated, with such a minimal reaction. And after six months, to see no scar, that was the best part.”

The cells were implanted in the monkeys “using a state-of-the-art surgical procedure” guided by an MRI image, says Emborg. The three rhesus monkeys used in the study at the Wisconsin National Primate Research Center had a lesion in a brain region that causes the movement disorder Parkinson’s disease, which afflicts up to 1 million Americans. Parkinson’s is caused by the death of a small number of neurons that make dopamine, a signaling chemical used in the brain.

The transplanted cells came from induced pluripotent stem cells (iPS cells), which can, like embryonic stem cells, develop into virtually any cell in the body. iPS cells, however, derive from adult cells rather than embryos.

In the lab, the iPS cells were converted into neural progenitor cells. These intermediate-stage cells can further specialize into the neurons that carry nerve signals, and the glial cells that perform many support and nutritional functions. This final stage of maturation occurred inside the monkey.

Zhang, who was the first in the world to derive neural cells from embryonic stem cells and then iPS cells, says one key to success was precise control over the development process. “We differentiate the stem cells only into neural cells. It would not work to transplant a cell population contaminated by non-neural cells.”

Another positive sign was the absence of any signs of cancer, says Zhang, a worrisome potential outcome of stem cell transplants. “Their appearance is normal, and we also used antibodies that mark cells that are dividing rapidly, as cancer cells are, and we do not see that. And when you look at what the cells have become, they become neurons with long axons [conducting fibers], as we’d expect. They also produce oligodendrocytes that are helping build insulating myelin sheaths for neurons, as they should. That means they have matured correctly, and are not cancerous.”

The experiment was designed as a proof of principle, says Zhang, who leads a group pioneering the use of iPS cells at the Waisman Center on the UW-Madison campus. The researchers did not transplant enough neurons to replace the dopamine-making cells in the brain, and the animal’s behavior did not improve.

Although promising, the transplant technique is a long way from the clinic, Zhang adds. “Unfortunately, this technique cannot be used to help patients until a number of questions are answered: Can this transplant improve the symptoms? Is it safe? Six months is not long enough… And what are the side effects? You may improve some symptoms, but if that leads to something else, then you have not solved the problem.”

Mean or Nice? These Traits Could Make or Break a Child’s Friendships

Nonetheless, the new study represents a real step forward that may benefit human patients suffering from several diseases, says Emborg. “By taking cells from the animal and returning them in a new form to the same animal, this is a first step toward personalized medicine.”

The need for treatment is incessant, says Emborg, noting that each year, Parkinson’s is diagnosed in 60,000 patients. “I’m gratified that the Parkinson’s Disease Foundation took a risk as the primary funder for this small study. Now we want to move ahead and see if this leads to a real treatment for this awful disease.”

“It’s really the first-ever transplant of iPS cells from a non-human primate back into the same animal, not just in the brain,” says Zhang. “I have not seen anybody transplanting reprogrammed iPS cells into the blood, the pancreas or anywhere else, into the same primate. This proof-of-principle study in primates presents hopes for personalized regenerative medicine.”

Does Eating a Mediterranean Diet Protect Against Memory Loss and Dementia?