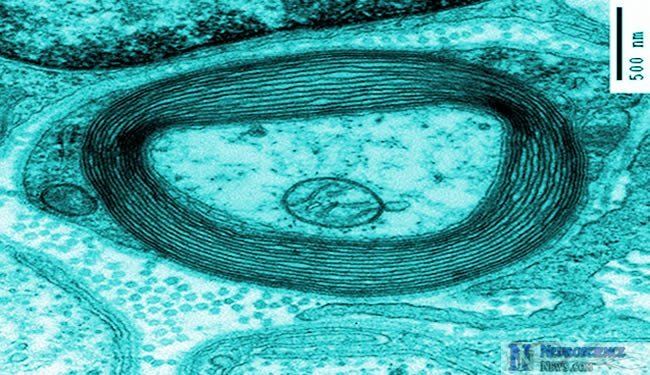 The Erk protein has been found to play a major role in myelination in the peripheral nervous system. The news release claims Erk is necessary for myelination.

The researchers knocked out the Erk gene during peripheral nervous system development in mice. The researchers noticed the neurons of these knock-out mice were largely unaffected, but Schwann cells were “just devastated at every stage of development.”

Schwann cells are glial cells in the peripheral nervous system that take part in the myelination of axons.

This research into the roles of Erk and MAPK in the myelination process could be extremely important to researchers working with neurofibromatosis, neurodevelopmental disorders, multiple sclerosis and many other fields.

You can read the full release below for more details.

This finding has particular importance because several neurodevelopmental disorders have recently been linked to genetic mutations in the complex developmental cascade containing Erk and its sister proteins.

Researchers at the University of North Carolina at Chapel Hill have pinpointed a crucial function for a key player in the development of the nervous system. They found that this player – a protein called Erk – is necessary for nerve fibers to be wrapped with an insulating substance called myelin, which allows messages to be sent from the brain to the peripheral limbs and back again.

The finding has particular importance because several neurodevelopmental disorders have recently been linked to genetic mutations in the complex developmental cascade containing Erk and its sister proteins.

The UNC study, published Jan. 13, 2011, in the journal Neuron, suggests that the effects of Erk are quite different from what previous studies done in vitro, in Petri dishes, had indicated.

“These in vitro studies have been absolutely important for understanding how things work on a molecular level,” said lead study author Jason M. Newbern, PhD, a postdoctoral research associate at the UNC School of Medicine. “But when you try to say that a tiny artificial system sitting in the culture hood is going to mimic the complexity of the interactions that occur when a cell develops and wraps around a nerve fiber, as it is growing out into your limb, as your limb is growing at the same time, and as your neurons are maturing and secreting different chemicals — there is just no way you can replicate that in a dish.”

Close to 10,000 papers have been published on the in’s and out’s of this famous cascade, known to scientists as the MAP kinase pathway. Because this pathway is so complicated, finding a way to completely “knock-out” its critical genes in a living animal has been difficult, said senior study author William D. Snider, MD, professor of neurology and cell and molecular physiology, and director of the UNC Neuroscience Center.

Using a number of genetic engineering tricks, the researchers were able to specifically knock-out the Erk gene during the development of the peripheral nervous system in mice. After knocking out the gene, the researchers were surprised to find that the neurons of the mutant mice appeared to be relatively unaffected.

“But we did see a dramatic effect in these myelinating cells called Schwann cells, which wrap the fibers in the peripheral nervous system with myelin to allow the rapid conduction of signals,” said Snider. “These cells were just devastated at every stage of development.”

The discovery informs the study of neurodevelopmental disorders such as neurofibromatosis, a genetic disease that affects 1 out of every 3000 people. In people with this disease, Schwann cells grow in an unregulated fashion, dotting the peripheral nerves with tumors.

Now that scientists have identified close to 30 genetic mutations in the MAP kinase pathway, Newbern says that there is increasing awareness of the importance of ERK signaling to neurodevelopmental disorders.

“So it provides a very compelling argument that we need to figure out what this pathway is doing in an in vivo setting, in a live animal,” said Newbern.

Because the cognitive defects experienced by patients with neurodevelopmental delay are more closely linked to the development of the central nervous system than to the peripheral nervous system, the researchers plan to expand their studies to see what the effects might be of losing Erk in the brain. They also want to develop models than can recapitulate what happens when this pathway is overactive, as is the case with neurofibromatosis.

Notes about the research