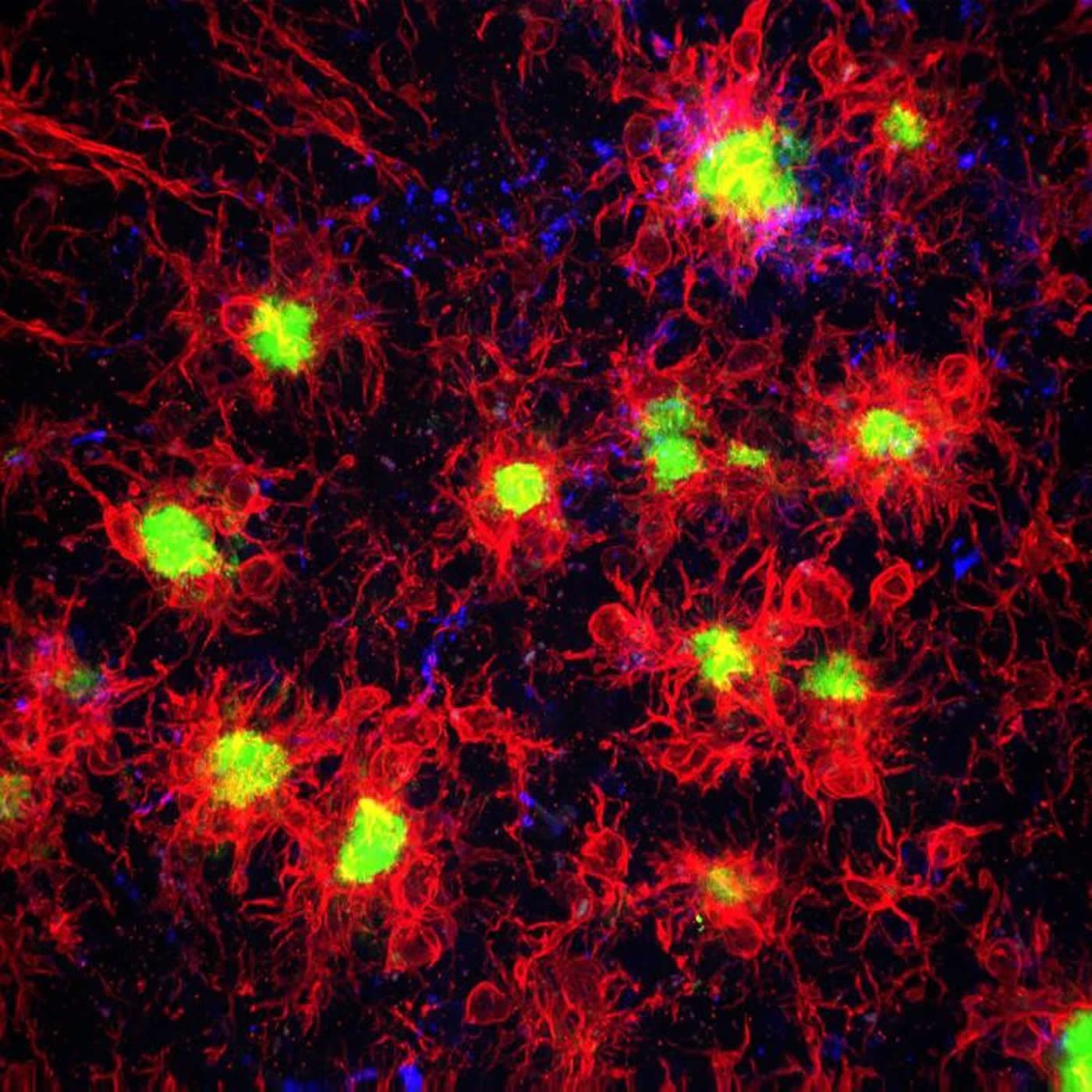 Microglia, shown in red, surround and react to the amyloid-beta plaques, shown in green, in the Alzheimer's disease brain. The image is credited to Kim Green lab / UCIz.

Summary: The brain’s immune cells may contribute to the development of Alzheimer’s disease. Turning off microglia in specific areas of the brain prevented the formation of amyloid plaques. The findings could help pave the way for new treatments for Alzheimer’s.

Scientists from the University of California, Irvine School of Biological Sciences have discovered how to forestall Alzheimer’s disease in a laboratory setting, a finding that could one day help in devising targeted drugs that prevent it.

The researchers found that by removing brain immune cells known as microglia from rodent models of Alzheimer’s disease, beta-amyloid plaques – the hallmark pathology of AD – never formed. Their study will appear Aug. 21 in the journal Nature Communications.

Previous research has shown most Alzheimer’s risk genes are turned on in microglia, suggesting these cells play a role in the disease. “However, we hadn’t understood exactly what the microglia are doing and whether they are significant in the initial Alzheimer’s process,” said Kim Green, associate professor of neurobiology & behavior. “We decided to examine this issue by looking at what would happen in their absence.”

The researchers used a drug that blocks microglia signaling that is necessary for their survival. Green and his lab have previously shown that blocking this signaling effectively eliminates these immune cells from the brain. “What was striking about these studies is we found that in areas without microglia, plaques didn’t form,” Green said. “However, in places where microglia survived, plaques did develop. You don’t have Alzheimer’s without plaques, and we now know microglia are a necessary component in the development of Alzheimer’s.”

The scientists also discovered that when plaques are present, microglia perceive them as harmful and attack them. However, the attack also switches off genes in neurons needed for normal brain functioning. “This finding underlines the crucial role of these brain immune cells in the development and progression of Alzheimer’s,” said Green.

Professor Green and colleagues say their discovery holds promise for creating future drugs that prevent the disease. “We are not proposing to remove all microglia from the brain,” Professor Green said, noting the importance of microglia in regulating other brain functions. “What could be possible is devising therapeutics that affect microglia in targeted ways.”

He also believes the project’s research approach offers an avenue for better understanding other brain disorders.

“These immune cells are involved in every neurological disease and even in brain injury,” Professor Green said. “Removing microglia could enable researchers working in those areas to determine the cells’ role and whether targeting microglia could be a potential treatment.”

Funding: The National Institutes for Health provided support for the research, which was performed in collaboration with Plexxikon Inc.

Childhood Abdominal Pain May Be Linked to Disordered Eating in Teenagers

Many risk genes for the development of Alzheimer’s disease (AD) are exclusively or highly expressed in myeloid cells. Microglia are dependent on colony-stimulating factor 1 receptor (CSF1R) signaling for their survival. We designed and synthesized a highly selective brain-penetrant CSF1R inhibitor (PLX5622) allowing for extended and specific microglial elimination, preceding and during pathology development. We find that in the 5xFAD mouse model of AD, plaques fail to form in the parenchymal space following microglial depletion, except in areas containing surviving microglia. Instead, Aβ deposits in cortical blood vessels reminiscent of cerebral amyloid angiopathy. Altered gene expression in the 5xFAD hippocampus is also reversed by the absence of microglia. Transcriptional analyses of the residual plaque-forming microglia show they exhibit a disease-associated microglia profile. Collectively, we describe the structure, formulation, and efficacy of PLX5622, which allows for sustained microglial depletion and identify roles of microglia in initiating plaque pathogenesis.

Why Animals Recognize Numbers but Only Humans Can Do Math

Why Animals Recognize Numbers but Only Humans Can Do Math