A good night’s sleep may be in sight: New 3D models of melatonin receptors shed light on sleep disorders

Summary: Researchers have created new 3D maps of two melatonin receptors. The models can be used to help develop new treatments that not only improve sleep, but may also treat a variety of other conditions from diabetes to cancer.

A third of all Americans have difficulty with sleeping, and many of them turn to melatonin supplements to catch some Zs. However, scientists don’t fully understand melatonin’s role in the biological clock, which has made it difficult to develop drugs for sleep disorders without several side effects.

Now, an international team of scientists has shed much-needed light on melatonin’s effects, opening the door to the development of new drugs for sleep disorders — and other health issues affected by melatonin. They developed 3D models of the tiny antennae — called receptors — on the surface of cells that synchronize the body’s internal clock with the day and night cycle.

“Our goal is to provide the structural information to other researchers who can use it for designing new drug compounds or to study mutations of these receptors in patients,” said corresponding author Vadim Cherezov, a scientist at the Bridge Institute at USC Michelson Center for Convergent Bioscience.

Creating the 3D maps of the two melatonin receptors, MT1 and MT2, is critical for understanding how the biological clock works. The scientists can use this information to design drug molecules that bind to the melatonin receptors and monitor the potential effects. The benefits could go beyond improving sleep.

“This data will help us design drugs that interact only with these receptors, with the hope we can treat a variety of conditions including diabetes, cancers, and sleep disorders, in a more targeted way,” said Dr. Bryan L. Roth, pharmacology professor at the UNC School of Medicine.

The findings on the melatonin receptors were published in two letters on Wednesday, April 24, in the journal Nature.

Melatonin comes from the ‘soul’

Melatonin is generated in the center of the brain by the pineal gland, once described by the philosopher Descartes as the “soul” of the brain and body.

Humans respond naturally to daylight changes through the pineal gland, near the hypothalamus. As night falls, the gland produces more melatonin, which then binds to the MT1 and MT2 receptors of the cells. Before dawn, the gland decreases melatonin levels, signaling that it’s time to wake.

MT1 and MT2 are among an estimated 800 receptors in the human body. These receptors, known as “G protein-coupled receptors,” (GPCRs) appear on the surface of a cell. The receptors act as a sort of email inbox, relaying information into the cell to set off a cascade of activity.

About a third of all drugs on the market are designed to bind with GPCRs. Each receptor has a different role in regulating functions in the body, many of which are critical for basic survival, such as hunger and reproductivity. The bulk of these receptors also have some role in the human olfactory system — taste and smell.

Scientists around the world have obtained structures of less than one-tenth of these receptors so far. MT1 and MT2 are among the latest. The MT1 and MT2 receptors are important for multiple processes, including reproduction and even some cancers.

“By comparing the 3D structures of the MT1 and MT2 receptors, we can better discern the unique, structural differences that distinguish the two receptors from each other — and their roles in the biological clock,” said Wei Liu of Arizona State University’s Biodesign Institute. “Armed with this knowledge, it becomes easier to design drug-like molecules that will bind to only one receptor or the other, but not both. This selective binding is important as it will minimize unwanted side-effects.”

The structures of both receptors were obtained using a laser, called the Linac Coherent Light Source (LCLS) at the SLAC National Accelerator Laboratory, which uses X-rays to take stop-action pictures of the receptor atoms and molecules in motion. 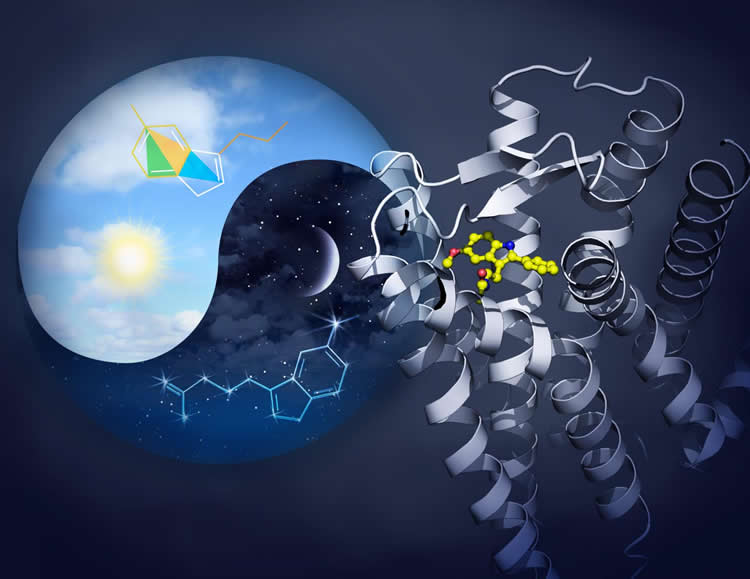 The sleep-promoting hormone melatonin (shown as a constellation in the night sky) is synthesized from serotonin (shown as a kite) during night time, and both of these archaic molecules predate animal evolution. High melatonin levels at night permit it to establish its sleep-promoting properties by acting through high affinity receptors, depicted in the right side of the image composition. The image is credited to Yekaterina Kadyshevskaya, Bridge Institute at USC Michelson Center for Convergent Bioscience.

“Due to the tiny size of the crystals, it wouldn’t have been possible to make these measurements anywhere other than LCLS,” says co-author Alex Batyuk, a scientist at SLAC National Accelerator Laboratory. “Because of the extreme brightness and short pulse duration of LCLS, we were able to collect hundreds of thousands of images of the crystals to figure out the three-dimensional structure of these receptors.”

The research is the result of a collaboration among scientists at USC, Arizona State University’s Biodesign Institute and Department of Physics, SLAC National Accelerator Laboratory, University of Buffalo, University of North Carolina, and the Université de Lille in France.

The human MT1 and MT2 melatonin receptors1,2 are G-protein-coupled receptors (GPCRs) that help to regulate circadian rhythm and sleep patterns3. Drug development efforts have targeted both receptors for the treatment of insomnia, circadian rhythm and mood disorders, and cancer3, and MT2 has also been implicated in type 2 diabetes4,5. Here we report X-ray free electron laser (XFEL) structures of the human MT2 receptor in complex with the agonists 2-phenylmelatonin (2-PMT) and ramelteon6 at resolutions of 2.8 Å and 3.3 Å, respectively, along with two structures of function-related mutants: H2085.46A (superscripts represent the Ballesteros–Weinstein residue numbering nomenclature7) and N862.50D, obtained in complex with 2-PMT. Comparison of the structures of MT2 with a published structure8 of MT1 reveals that, despite conservation of the orthosteric ligand-binding site residues, there are notable conformational variations as well as differences in [3H]melatonin dissociation kinetics that provide insights into the selectivity between melatonin receptor subtypes. A membrane-buried lateral ligand entry channel is observed in both MT1 and MT2, but in addition the MT2 structures reveal a narrow opening towards the solvent in the extracellular part of the receptor. We provide functional and kinetic data that support a prominent role for intramembrane ligand entry in both receptors, and suggest that there might also be an extracellular entry path in MT2. Our findings contribute to a molecular understanding of melatonin receptor subtype selectivity and ligand access modes, which are essential for the design of highly selective melatonin tool compounds and therapeutic agents.

Melatonin (N-acetyl-5-methoxytryptamine) is a neurohormone that maintains circadian rhythms1 by synchronization to environmental cues and is involved in diverse physiological processes2 such as the regulation of blood pressure and core body temperature, oncogenesis, and immune function3. Melatonin is formed in the pineal gland in a light-regulated manner4 by enzymatic conversion from 5-hydroxytryptamine (5-HT or serotonin), and modulates sleep and wakefulness5 by activating two high-affinity G-protein-coupled receptors, type 1A (MT1) and type 1B (MT2)3,6. Shift work, travel, and ubiquitous artificial lighting can disrupt natural circadian rhythms; as a result, sleep disorders affect a substantial population in modern society and pose a considerable economic burden7. Over-the-counter melatonin is widely used to alleviate jet lag and as a safer alternative to benzodiazepines and other sleeping aids8,9, and is one of the most popular supplements in the United States10. Here, we present high-resolution room-temperature X-ray free electron laser (XFEL) structures of MT1 in complex with four agonists: the insomnia drug ramelteon11, two melatonin analogues, and the mixed melatonin–serotonin antidepressant agomelatine12,13. The structure of MT2 is described in an accompanying paper14. Although the MT1 and 5-HT receptors have similar endogenous ligands, and agomelatine acts on both receptors, the receptors differ markedly in the structure and composition of their ligand pockets; in MT1, access to the ligand pocket is tightly sealed from solvent by extracellular loop 2, leaving only a narrow channel between transmembrane helices IV and V that connects it to the lipid bilayer. The binding site is extremely compact, and ligands interact with MT1 mainly by strong aromatic stacking with Phe179 and auxiliary hydrogen bonds with Asn162 and Gln181. Our structures provide an unexpected example of atypical ligand entry for a non-lipid receptor, lay the molecular foundation of ligand recognition by melatonin receptors, and will facilitate the design of future tool compounds and therapeutic agents, while their comparison to 5-HT receptors yields insights into the evolution and polypharmacology of G-protein-coupled receptors.