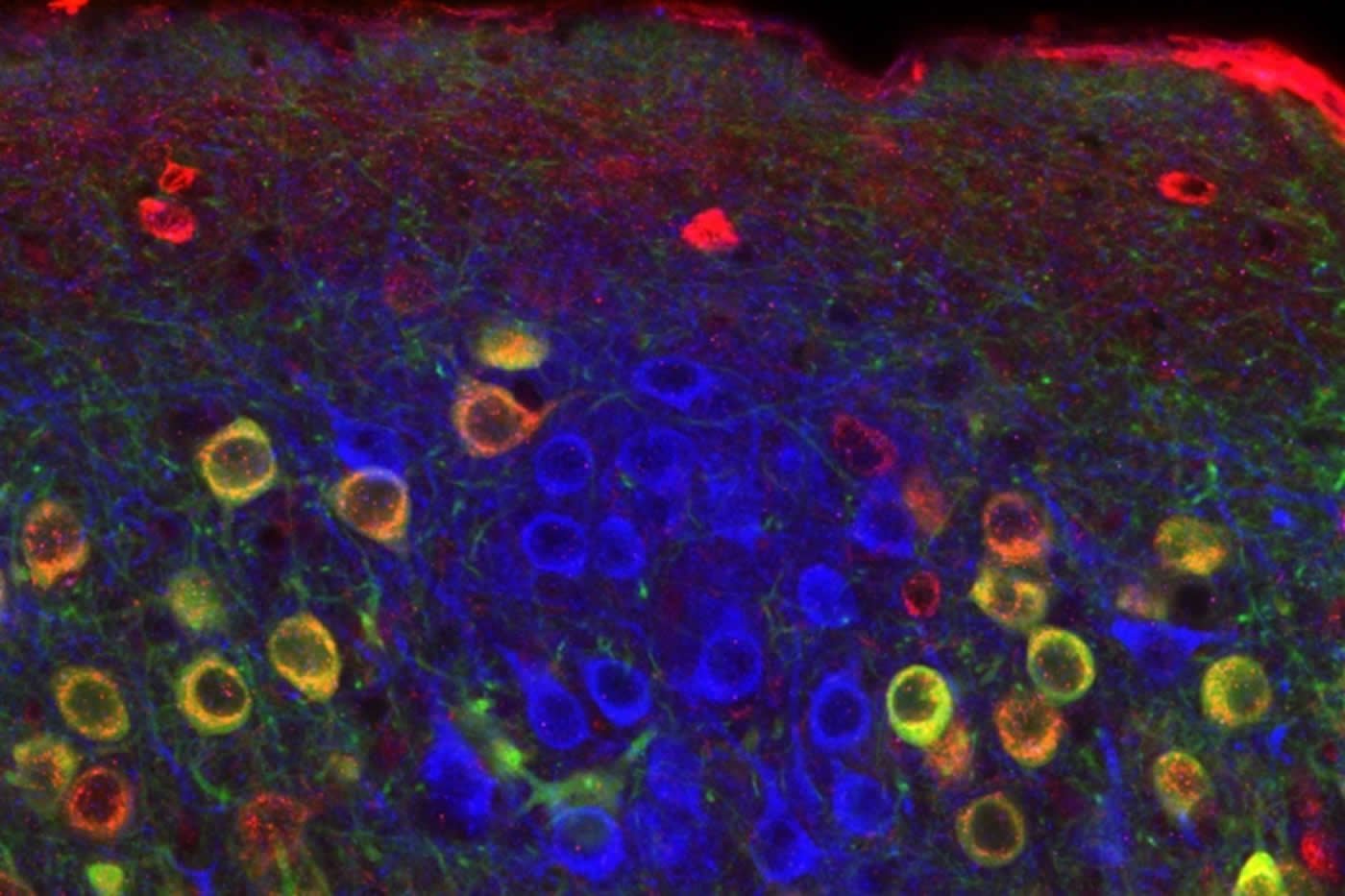 How the brain encodes time and place.

When you remember a particular experience, that memory has three critical elements — what, when, and where. MIT neuroscientists have now identified a brain circuit that processes the “when” and “where” components of memory.

This circuit, which connects the hippocampus and a region of the cortex known as entorhinal cortex, separates location and timing into two streams of information. The researchers also identified two populations of neurons in the entorhinal cortex that convey this information, dubbed “ocean cells” and “island cells.”

Previous models of memory had suggested that the hippocampus, a brain structure critical for memory formation, separates timing and context information. However, the new study shows that this information is split even before it reaches the hippocampus.

“It suggests that there is a dichotomy of function upstream of the hippocampus,” says Chen Sun, an MIT graduate student in brain and cognitive sciences and one of the lead authors of the paper, which appears in the Sept. 23 issue of Neuron. “There is one pathway that feeds temporal information into the hippocampus, and another that feeds contextual representations to the hippocampus.”

The paper’s other lead author is MIT postdoc Takashi Kitamura. The senior author is Susumu Tonegawa, the Picower Professor of Biology and Neuroscience and director of the RIKEN-MIT Center for Neural Circuit Genetics at MIT’s Picower Institute for Learning and Memory. Other authors are Picower Institute technical assistant Jared Martin, Stanford University graduate student Lacey Kitch, and Mark Schnitzer, an associate professor of biology and applied physics at Stanford.

Located just outside the hippocampus, the entorhinal cortex relays sensory information from other cortical areas to the hippocampus, where memories are formed. Tonegawa and colleagues identified island and ocean cells a few years ago, and have been working since then to discover their functions.

In 2014, Tonegawa’s lab reported that island cells, which form small clusters surrounded by ocean cells, are needed for the brain to form memories linking two events that occur in rapid succession. In the new Neuron study, the team found that ocean cells are required to create representations of a location where an event took place.

“Ocean cells are important for contextual representations,” Sun says. “When you’re in the library, when you’re crossing the street, when you’re on the subway, you have different memories associated with each of these contexts.”

To discover these functions, the researchers labeled the two cell populations with a fluorescent molecule that lights up when it binds to calcium — an indication that the neuron is firing. This allowed them to determine which cells were active during tasks requiring mice to discriminate between two different environments, or to link two events in time.

The researchers also used a technique called optogenetics, which allows them to control neuron activity using light, to investigate how the mice’s behavior changed when either island cells or ocean cells were silenced.

When they blocked ocean cell activity, the animals were no longer able to associate a certain environment with fear after receiving a foot shock there. Manipulating the island cells, meanwhile, allowed the researchers to lengthen or shorten the time gap between events that could be linked in the mice’s memory.

The researchers also found that these two streams of information flow from the entorhinal cortex to different parts of the hippocampus: Ocean cells send their contextual information to the CA3 and dentate gyrus regions, while island cells project to CA1 cells.

“Tonegawa’s group has revealed a key distinction in the processing of contextual and temporal information within different cell groups of the entorhinal cortex that project to distinct parts of the hippocampus,” says Howard Eichenbaum, director of the Center for Memory and Brain at Boston University, who was not involved in the research. “These findings advance our understanding of critical components of the brain circuit that supports memory.”

MIT researchers have now identified a brain circuit that processes the “when” and “where” components of memory.

Tonegawa’s lab is now pursuing further studies of how the entorhinal cortex and other parts of the brain represent time and place. The researchers are also investigating how information on timing and location are further processed in the brain to create a complete memory of an event.

“To form an episodic memory, each component has to be recombined together,” Kitamura says. “This is the next question.”

Summary
Forming distinct representations and memories of multiple contexts and episodes is thought to be a crucial function of the hippocampal-entorhinal cortical network. The hippocampal dentate gyrus (DG) and CA3 are known to contribute to these functions, but the role of the entorhinal cortex (EC) is poorly understood. Here, we show that Ocean cells, excitatory stellate neurons in the medial EC layer II projecting into DG and CA3, rapidly form a distinct representation of a novel context and drive context-specific activation of downstream CA3 cells as well as context-specific fear memory. In contrast, Island cells, excitatory pyramidal neurons in the medial EC layer II projecting into CA1, are indifferent to context-specific encoding or memory. On the other hand, Ocean cells are dispensable for temporal association learning, for which Island cells are crucial. Together, the two excitatory medial EC layer II inputs to the hippocampus have complementary roles in episodic memory.