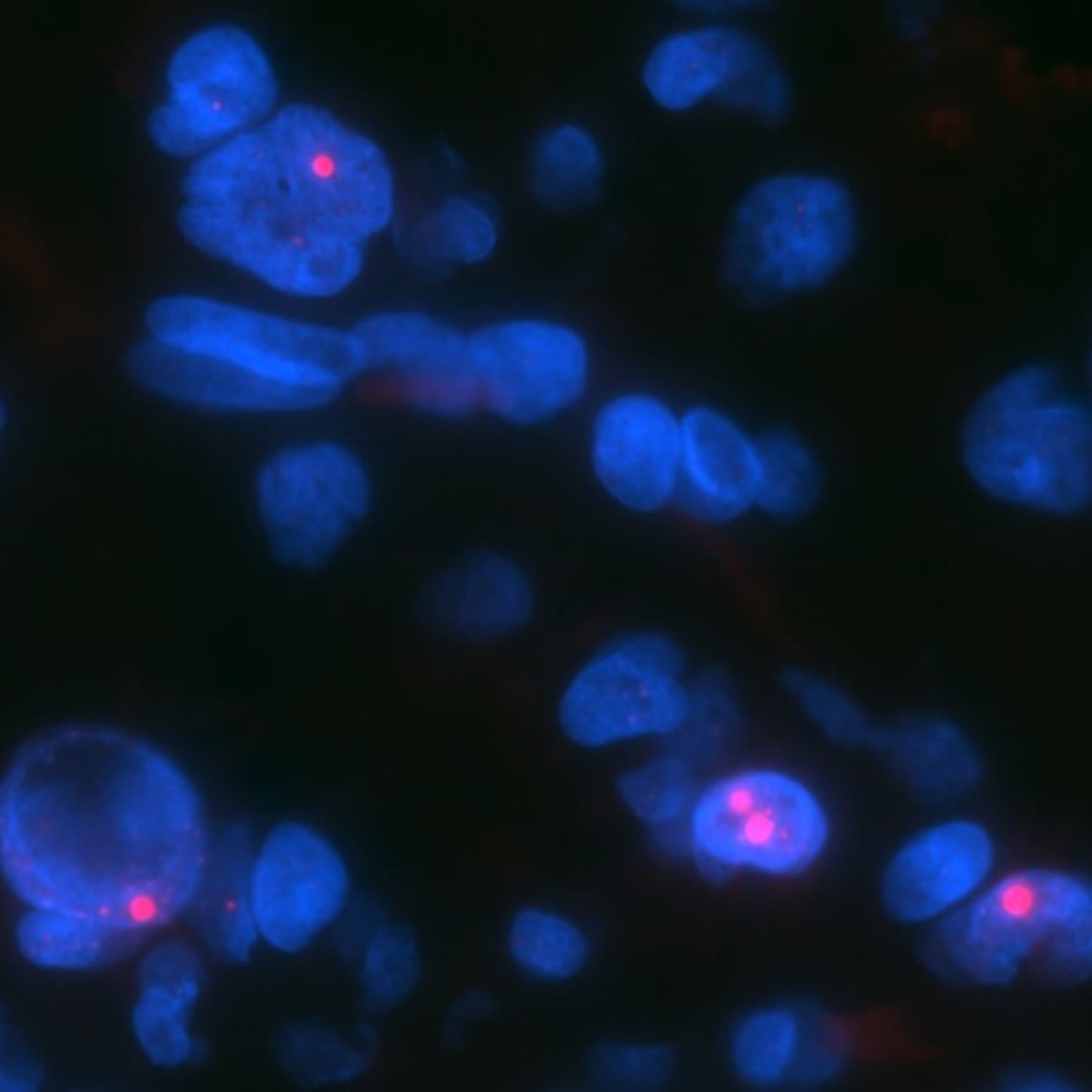 Both could serve as predictive treatment biomarkers or targets for therapy.

In a report on one of the two findings, published online Sept. 20 in Acta Neuropathologica, the investigators identified alterations in a protein known as ATRX in human brain tumors that arise as part of a genetically inherited condition known as neurofibromatosis type 1 (NF1). The disorder, marked initially by benign tumors on nerves, often leads to brain cancer, and although most NF1-related malignancies are nonaggressive, a fraction are “high-grade” and difficult to treat, experts say.

Research from other scientists at Johns Hopkins, he says, had suggested that some tumors, particularly those that affect the nervous system, have mutations in the ATRX gene, which produces proteins that appear to maintain the length of telomeres, repetitive segments of DNA on the ends of chromosomes that typically shorten each time a cell divides. Telomere shortening limits the number of divisions that cells can undergo. By keeping telomeres long, ATRX mutations give cells the ability to endlessly divide, a hallmark of cancer.

To see what role ATRX mutations might play in NF1-related brain cancers, Rodriguez and his colleagues examined samples of both high- and low-grade gliomas — tumors that arise from parent cells of nerve-supporting cells called glia — which were removed by surgery from 27 patients with NF1.

They tested the samples for longer telomeres that weren’t the product of a protein called telomerase, which helps maintain telomere length in healthy cells and more commonly in other cancers. This nontelomerase-associated telomere lengthening is known as alternative lengthening of telomeres or ALT. They also tested for loss of the protein product of ATRX caused by mutations in this gene.

About a third of the 27 samples had ALT and loss of the ATRX protein. The presence of both factors occurred in seven of 12 patients with high-grade tumors but only two of 14 with low-grade cancers.

If further studies confirm the role of the mutation, Rodriguez says, researchers might be able to develop anticancer agents to target cells with ATRX mutations or ALT to limit telomere length. In the meantime, he adds, gaining a better understanding of aggressive NF1-related tumors allows researchers to develop more realistic models of these cancers in the lab.

In a second study, described online Oct. 14 in Modern Pathology, the Johns Hopkins investigators sought a genetic source that could accurately identify subsets of low-grade pediatric gliomas, the most frequent tumors of the central nervous system in children. Unlike many other types of cancerous tumors, low-grade pediatric gliomas appear to have few genetic mutations, leaving the biology of these cancers a mystery, says Rodriguez.

In an effort to unravel that mystery, Rodriguez and his colleagues focused on the ways those cancer cells regulate the expression of genes or whether they make their constituent proteins. One way to control expression, he explains, is through microRNA, small pieces of noncoding genetic material that control whether a gene’s protein is generated from the DNA blueprints inside cell nuclei.

The researchers analyzed the amounts of 800 different microRNAs in nine different types of low-grade gliomas or related cancers. Of all of these, one in particular caught the researchers’ eyes: a microRNA called miR-487b, which was consistently underexpressed in tumor tissue compared to healthy cells.

To pin down the role of this microRNA, the researchers artificially increased its levels in lines of laboratory-grown human cancer cells that appeared to make too little of it, in turn bringing down the levels of the protein it affects. Unlike unaltered cancer cells, these new cells formed 30 percent fewer colonies and had decreased levels of other proteins, such as Nestin, by a third. Nestin is known to be important in both early development and in cancers.

Eventually, Rodriguez says, physicians might be able to look at the levels of this and other microRNAs in blood or cerebrospinal fluid to test for the presence of cancer. Researchers might also be able to target microRNAs directly, altering their levels to make cancer cells less likely to form tumors.

“By gaining a better understanding of the fine genetic differences between cancers and healthy tissues, we can develop better therapeutic or prognostic strategies,” he says.

About this brain cancer research article

Funding: Funding for the studies was provided by the Childhood Brain Tumor Foundation, the Pilocytic/Pilomyxoid Astrocytoma Fund, and Lauren’s First and Goal.

Low-grade (WHO I-II) gliomas and glioneuronal tumors represent the most frequent primary tumors of the central nervous system in children. They often have a good prognosis following total resection, however they can create many neurological complications due to mass effect, and may be difficult to resect depending on anatomic location. MicroRNAs have been identified as molecular regulators of protein expression/translation that can repress multiple mRNAs concurrently through base pairing, and have an important role in cancer, including brain tumors. Using the NanoString digital counting system, we analyzed the expression levels of 800 microRNAs in nine low-grade glial and glioneuronal tumor types (n=45). A set of 61 of these microRNAs were differentially expressed in tumors compared with the brain, and several showed levels varying by tumor type. The expression differences were more accentuated in subependymal giant cell astrocytoma, compared with other groups, and demonstrated the highest degree of microRNA repression validated by RT-PCR, including miR-129-2-3p, miR-219-5p, miR-338-3p, miR-487b, miR-885-5p, and miR-323a-3p. Conversely, miR-4488 and miR-1246 were overexpressed in dysembryoplastic neuroepithelial tumors compared with the brain and other tumors. The cluster 14q32.31 member miR-487b was variably under-expressed in pediatric glioma lines compared with human neural stem cells. Overexpression of miR-487b in a pediatric glioma cell line (KNS42) using lentiviral vectors led to a decrease in colony formation in soft agar (30%) (P<0.05), and decreased expression of known predicted targets PROM1 and Nestin (but not WNT5A). miR-487b overexpression had no significant effect on cell growth, proliferation, sensitivity to temozolomide, migration, or invasion. In summary, microRNA regulation appears to have a role in the biology of glial and glioneuronal tumor subtypes, a finding that deserves further investigation.