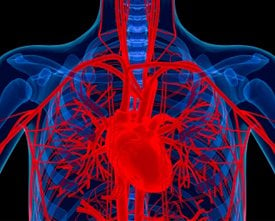 Researchers ran a number of test which focused on different kinds of thinking, such as memory, processing speed and executive function. Those with diabetes and subclinical cardiovascular disease had higher risk of cognitive dysfunction.
Home
Featured

Heart Health Matters to Your Brain

People suffering from type 2 diabetes and cardiovascular disease (CVD) are at an increased risk of cognitive decline, according to a new study from Wake Forest Baptist Medical Center.

Lead author Christina E. Hugenschmidt, Ph.D., an instructor of gerontology and geriatric medicine at Wake Forest Baptist, said the results from the Diabetes Heart Study-Mind (DHS-Mind) suggest that CVD is playing a role in cognition problems before it is clinically apparent in patients. The research appears online ahead of print in the Journal of Diabetes and Its Complications.

“There has been a lot of research looking at the links between type 2 diabetes and increased risk for dementia, but this is the first study to look specifically at subclinical CVD and the role it plays,” Hugenschmidt said. “Our research shows that CVD risk caused by diabetes even before it’s at a clinically treatable level might be bad for your brain.

Hugenschmidt said DHS-Mind is a follow-up study to the Diabetes Heart Study (DHS), which examined relationships between cognitive function, vascular calcified plaque and other major diabetes risk factors associated with cognition. The DHS investigated CVD in siblings with a high incidence and prevalence of type 2 diabetes, where extensive measurements of CVD risk factors were obtained during exams that occurred from 1998 to 2006.

The DHS-Mind study added cognitive testing to existing measures with the express purpose of exploring the relationships between measures of atherosclerosis and cognition in a population heavily affected by diabetes, a novel approach given that previous studies have focused on diabetes and cognition in the context of clinically evident CVD, Hugenschmidt said. The researchers followed up with as many of the original 1,443 DHS study participants as possible who had cardiovascular measures. Of that 516 total, 422 were affected with type 2 diabetes and 94 were unaffected.

Hugenschmidt said the researchers ran a battery of cognitive testing that looked at different kinds of thinking like memory and processing speed, as well as executive function, which is a set of mental skills coordinated in the brain’s frontal lobe that includes stop and think processes like managing time and attention, planning and organizing. She said that being able to look at data where the comparison group was  siblings, some of whom had a high level of CVD themselves, made the results more clinically relevant because the participants shared the same environmental and genetic background.

“We still saw a difference between these two groups. Even compared to their own siblings who were not disease free, those with diabetes and subclinical cardiovascular disease had a higher risk of cognitive dysfunction,” Hugenschmidt said.

CVD explains a lot of the cognitive problems that people with diabetes experience, Hugenschmidt said. “One possibility is that your brain requires a really steady blood flow and it’s possible that the cardiovascular disease that accompanies diabetes might be the main driver behind the cognitive deficits that we see.”

Hugenschmidt said the takeaway for clinicians is to take CVD risk factors into consideration when they’re treating patients with type 2 diabetes patients because even at borderline clinical levels, it might have long-term implications for peoples’ mental, cognitive health.

Notes about this cardiovascular disease and cognitive decline research