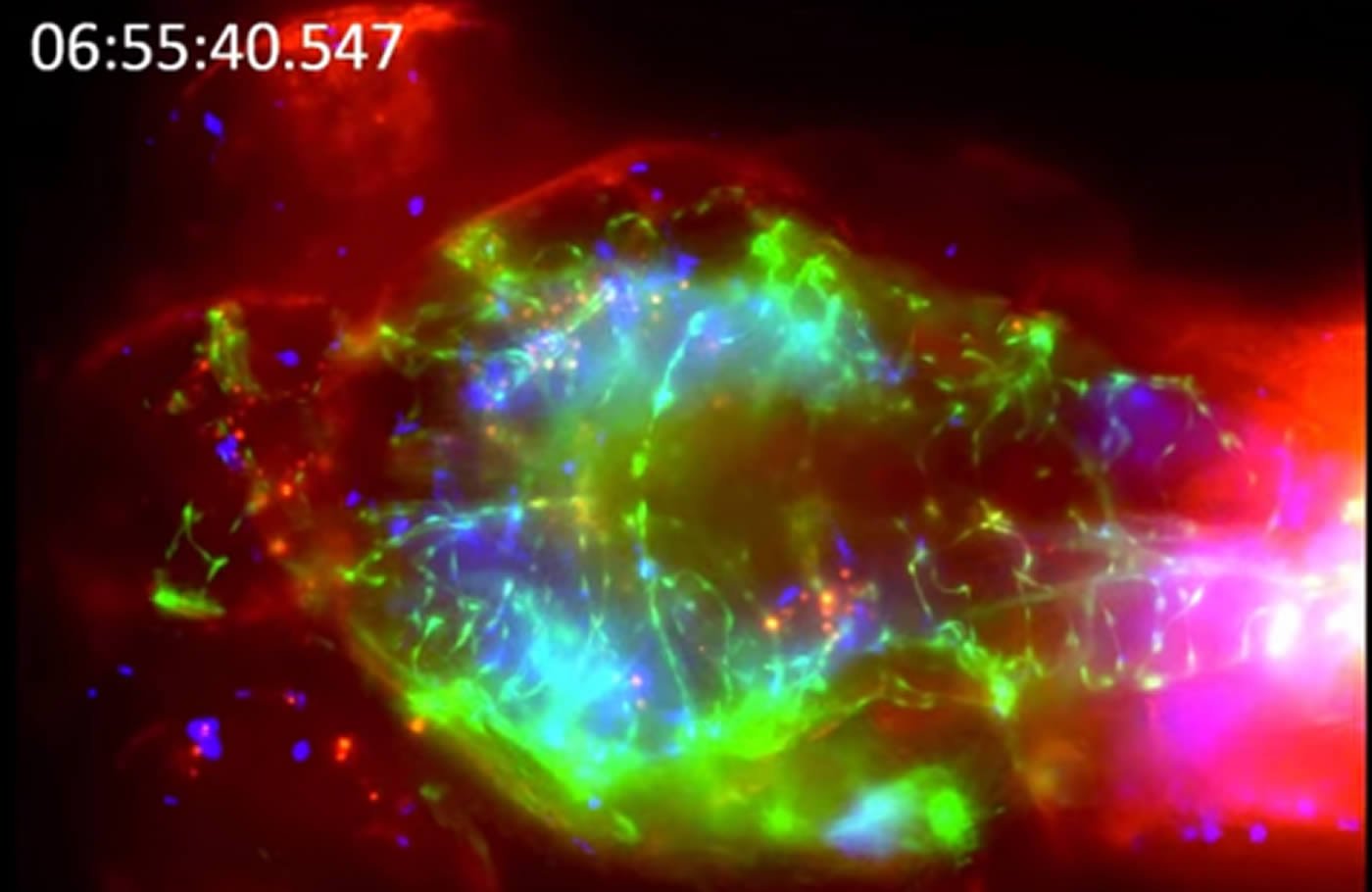 A zebrafish larva is infected with Cryptococcal meningitis and photographed under a microscope. Scientists observe as the infection (visible red orbs) takes over the brain. Macrophages (shown in blue) attack the infection as it travels through green blood vessels and throughout surrounding tissue. The eyes of the fish are located at the top- and bottom-left corners of the image. Credit: Stefan Oehlers/Duke Medicine.

A study led by John Perfect, MD, chief of the Division of Infectious Diseases, is using transparent fish to watch in real time as Cryptococcal meningitis takes over the brain. The resulting images are worthy of a sci-fi movie teaser, but could be valuable in disrupting the real, crippling brain infection that kills more than 600,000 people worldwide each year.

Airborne cells of Cryptococcus make their way into our lungs practically every day — unwelcome guests, but of little consequence for those with healthy immune systems. But for those with compromised immunities, whether by HIV infection or cancer treatment, a resulting Cryptococcal meningitis infection can quickly become deadly.

To be able to target the infection with medications in the future, researchers need to know more about how the organism (technically a yeast), moves from the lungs into the blood stream and through the blood-brain barrier. So they injected the organism into microscopic zebrafish larvae, which have clear bodies, and watched the infection take hold.

The newly developed fish model is described in mBio, a journal of the American Society of Microbiology

“What’s impressive is that, unlike in a mouse or rabbit, you can actually see the organism producing disease in the live animal,” said John R. Perfect, MD, chief of the division of infectious diseases at Duke University School of Medicine. “Day-by-day, it’s growing and moving throughout the body. You can’t see this anywhere else.”

A video shows a transparent larva’s body as Cryptococcus fungi, made red by a fluorescent tracer, moves through tissue, blood vessels and into the brain. Blue macrophages chase and gobble up some of the red infection as it spreads through and around green blood vessels.

Using a zebrafish to observe the process of infection offers a small vertebrate animal with an immune system somewhat similar to a human’s, Perfect said. Because the fish are tiny and easy to reproduce, they cost less and are easier to study than a mouse or larger mammal.

The larvae are also permeable to small molecules, which will allow scientists to batch-test different drug compounds against the infection relatively quickly and easily, said co-author David Tobin, PhD, assistant professor in molecular genetics and microbiology and immunology at Duke.

“This model will allow researchers to screen the whole organism while it is living with an infection,” Tobin said. “It will allow us to screen libraries of drug compounds relatively quickly. We can also develop and test mutant strains of Cryptococcus in these larvae. This can teach us which factors play a role in infection and those could be therapeutic targets in the future.”

Tobin also uses zebrafish to study bacteria closely related to those that cause tuberculosis, and findings from this model have been applied to understanding human disease.

There are some drawbacks to studying these infections in fish — their body temperatures are cooler and they lack lungs, which is where Cryptococcus enters the human body, Perfect said. But the fish offer a starting point to create leads that scientists can then investigate further in more complex mammals.

“Our hope is that by creating this system, we can continue our own investigations into other harmful organisms, and that other scientists worldwide can adapt our zebrafish model to investigate the diseases that are priorities in their communities,” Perfect said.

The human fungal pathogen Cryptococcus neoformans is capable of infecting a broad range of hosts, from invertebrates like amoebas and nematodes to standard vertebrate models such as mice and rabbits. Here we have taken advantage of a zebrafish model to investigate host-pathogen interactions of Cryptococcus with the zebrafish innate immune system, which shares a highly conserved framework with that of mammals. Through live-imaging observations and genetic knockdown, we establish that macrophages are the primary immune cells responsible for responding to and containing acute cryptococcal infections. By interrogating survival and cryptococcal burden following infection with a panel of Cryptococcus mutants, we find that virulence factors initially identified as important in causing disease in mice are also necessary for pathogenesis in zebrafish larvae. Live imaging of the cranial blood vessels of infected larvae reveals that C. neoformans is able to penetrate the zebrafish brain following intravenous infection. By studying a C. neoformans FNX1 gene mutant, we find that blood-brain barrier invasion is dependent on a known cryptococcal invasion-promoting pathway previously identified in a murine model of central nervous system invasion. The zebrafish-C. neoformans platform provides a visually and genetically accessible vertebrate model system for cryptococcal pathogenesis with many of the advantages of small invertebrates. This model is well suited for higher-throughput screening of mutants, mechanistic dissection of cryptococcal pathogenesis in live animals, and use in the evaluation of therapeutic agents.

IMPORTANCE Cryptococcus neoformans is an important opportunistic pathogen that is estimated to be responsible for more than 600,000 deaths worldwide annually. Existing mammalian models of cryptococcal pathogenesis are costly, and the analysis of important pathogenic processes such as meningitis is laborious and remains a challenge to visualize. Conversely, although invertebrate models of cryptococcal infection allow high-throughput assays, they fail to replicate the anatomical complexity found in vertebrates and, specifically, cryptococcal stages of disease. Here we have utilized larval zebrafish as a platform that overcomes many of these limitations. We demonstrate that the pathogenesis of C. neoformans infection in zebrafish involves factors identical to those in mammalian and invertebrate infections. We then utilize the live-imaging capacity of zebrafish larvae to follow the progression of cryptococcal infection in real time and establish a relevant model of the critical central nervous system infection phase of disease in a nonmammalian model.