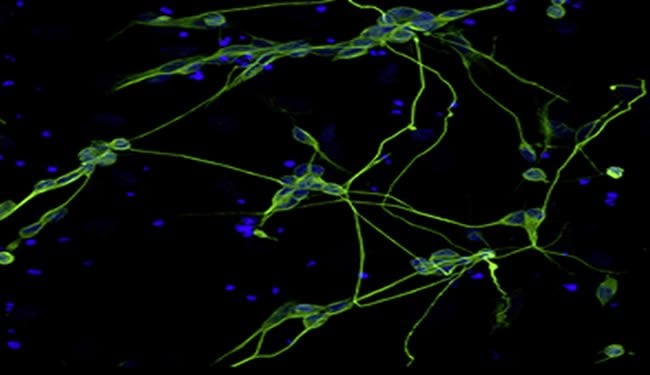 Until recently, the production of pluripotent “multipurpose” stem cells from skin cells was considered to be the ultimate new development. In the meantime, it has become possible to directly convert cells of the body into one another – without the time-consuming detour via a pluripotent intermediate stage. However, this method has so far been rather inefficient. Scientists from the Bonn Institute of Reconstructive Neurobiology (director: Prof. Dr. Oliver Brüstle) have now developed the method to the point that it can be used for biomedical applications. The scientists are presenting their results in the journal “Nature Methods“.

There was much excitement surrounding cell reprogramming with the breakthrough of Shinya Yamanaka. In 2006, the Japanese scientist was able to reprogram skin cells for the first time with the aid of a few control factors into so-called induced pluripotent stem cells (iPS cells) – “multipurpose” cells from which all body cells can in principle be produced. In 2010, Marius Wernig, a former postdoctoral researcher with Prof. Brüstle and meanwhile the director of the institute at Stanford University in California, developed the idea further: Using only three so-called transcription factors, his team was able to perform direct transformation of skin cells into so-called induced neurons (iN). However, the method has so far been rather inefficient: Only a small percentage of the skin cells were converted into the desired nerve cells.

Researchers are increasing yields during transformation of cells

For the scientists at the LIFE & BRAIN Center at the University of Bonn, that was not enough. They are interested in the biomedical utilization of artificially produced human nerve cells for disease research, cell replacement, and the development of active substances. One concept seemed likely: Why not use low-molecular active substances – so-called small molecules – to optimize the process? Julia Ladewig, post-doctoral researcher and lead author of the study, began using such active substances to influence several signaling pathways important for cell development.

By blocking the so-called SMAD signaling pathway and inhibiting glycogen synthase kinase 3 beta (GSK3ß), they increased the transformational efficiency by several times – and were thus able to even simplify the means of extraction. Using only two instead of previously three transcription factors and three active substances, the Bonn researchers were able to convert a majority of the skin cells into neurons. In the end, their cell cultures contained up to more than 80% human neurons. And since the cells divide even further during the conversion process, the actual efficiency is even higher.

Two nerve cells are produced from one skin cell

“We can obtain up to more than 200,000 nerve cells converted in this way from 100,000 skin cells,“ says Julia Ladewig. In order to find the right combination of active substances, the Bonn scientists are focusing on signaling pathways which are especially important for cell specialization. “The SMAD signaling pathway and also GSK3ß were suspected of inhibiting the conversion of connective tissue cells and pluripotent stem cells into neural cells. The obvious step was to block both of them using corresponding active substances,” says Philipp Koch, team leader and senior author responsible for the study, together with Prof. Brüstle. The results were intriguing: “We were able to demonstrate how the genes typical for skin fibroblast were gradually down-regulated and nerve-cell-specific genes were activated during the cell transformation. In addition, the nerve cells thus obtained were functionally active, which also makes them interesting as a source for cell replacement,” says Ladewig.

Scientists are now transferring the method to other types of cells

The Brain Region Responsible for Self-Bias in Memory

The Bonn scientists have already transferred the method to other types of cells such as, for example, umbilical cord cells. Brüstle clearly foresees the next steps: “First of all, we want to use nerve cells obtained in this way for disease and active substance research. The long-term goal will be to convert cells directly in the body into nerve cells.”