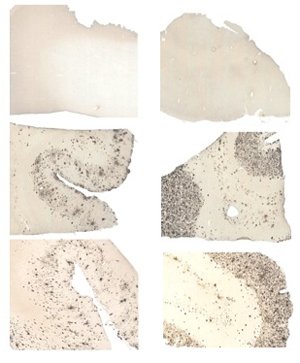 Clue to Alzheimer’s Cause Found in Brain Samples

Researchers at Washington University School of Medicine in St. Louis have found a key difference in the brains of people with Alzheimer’s disease and those who are cognitively normal but still have brain plaques that characterize this type of dementia.

“There is a very interesting group of people whose thinking and memory are normal, even late in life, yet their brains are full of amyloid beta plaques that appear to be identical to what’s seen in Alzheimer’s disease,” says David L. Brody, MD, PhD, associate professor of neurology. “How this can occur is a tantalizing clinical question. It makes it clear that we don’t understand exactly what causes dementia.”

Hard plaques made of a protein called amyloid beta are always present in the brain of a person diagnosed with Alzheimer’s disease, according to Brody. But the simple presence of plaques does not always result in impaired thinking and memory. In other words, the plaques are necessary – but not sufficient – to cause Alzheimer’s dementia.

The new study, available online in Annals of Neurology, still implicates amyloid beta in causing Alzheimer’s dementia, but not necessarily in the form of plaques. Instead, smaller molecules of amyloid beta dissolved in the brain fluid appear more closely correlated with whether a person develops symptoms of dementia. Called amyloid beta “oligomers,” they contain more than a single molecule of amyloid beta but not so many that they form a plaque.

Oligomers floating in brain fluid have long been suspected to have a role in Alzheimer’s disease. But they are difficult to measure. Most methods only detect their presence or absence, or very large quantities. Brody and his colleagues developed a sensitive method to count even small numbers of oligomers in brain fluid and used it to compare amounts in their samples.

The researchers examined samples of brain tissue and fluid from 33 deceased elderly subjects (ages 74 to 107). Ten subjects were normal – no plaques and no dementia. Fourteen had plaques, but no dementia. And nine had a diagnosis of Alzheimer’s disease – both plaques and dementia.

But even oligomer levels did not completely distinguish the two groups. For example, some people with plaques but without dementia still had oligomers, even in similar quantity to some patients with Alzheimer’s disease. Where the two groups differed completely, according to Brody and his colleagues, was the ratio of oligomers to plaques. They measured more oligomers per plaque in patients with dementia, and fewer oligomers per plaque in the samples from cognitively normal people.

In people with plaques but no dementia, Brody speculates that the plaques could serve as a buffer, binding with free oligomers and keeping them tied down. And in dementia, perhaps the plaques have exceeded their capacity to capture the oligomers, leaving them free to float in the brain’s fluid, where they can damage or interfere with neurons.

Brody cautions that, due to the difficulty in getting samples, oligomer levels have never been measured in living people. Therefore, it’s possible these floating clumps of amyloid beta only form after death. Even so, he says, there is still a clear difference between the two groups.

“The plaques and oligomers appear to be in some kind of equilibrium,” Brody says. “What happens to shift the relationship between the oligomers and plaques? Like much Alzheimer’s research, this study raises more questions than it answers. But it’s an important next piece of the puzzle.”

This study was supported by the National Institutes of Health (NIH), a Burroughs Wellcome Career Award in the Biomedical Sciences, the Thrasher Research Fund, the National Institute on Aging, the Charles F. and Joanne Knight Alzheimer’s Disease Research Center at Washington University, the Cure Alzheimer’s Fund, and the NIH Neuroscience Blueprint Core Grant to Washington University.