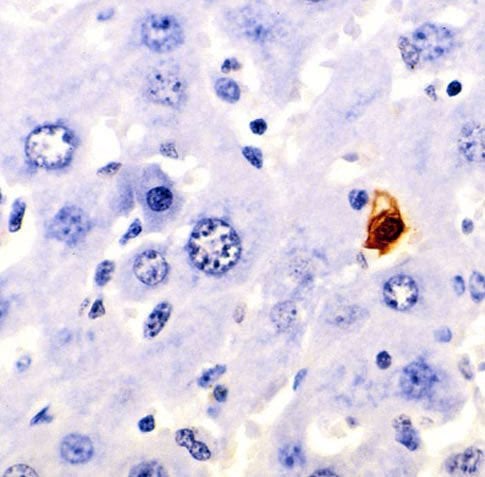 Researchers have, for the first time, visualized the molecular changes in a critical cell death protein that force cells to die. Defects in cell death have been linked to the development of diseases such as cancer and neurodegenerative conditions. Credited to NIH.
Home
Electrophysiology

Scientists at the Walter and Eliza Hall Institute have for the first time visualized the molecular changes in a critical cell death protein that force cells to die.

The finding provides important insights into how cell death occurs, and could lead to new classes of medicines that control whether diseased cells live or die.

Dr Peter Czabotar, Professor Peter Colman and colleagues in the institute’s Structural Biology division, together with Dr Dana Westphal from the institute’s Molecular Genetics of Cancer division, made the discovery which is published in the latest edition of the journal Cell.

Dr Czabotar said activation of the protein Bax had long been known to be an important event leading to apoptosis, but until now it was not known how this activation occurred. “One of the key steps in cell death is that holes are punched into a membrane in the cell, the mitochondrial membrane,” Dr Czabotar said. “Once this happens the cell is going to go on and die. Bax is responsible for punching the holes in the mitochondrial membrane and visualising its activation brings us a step closer to understanding the mechanics of cell death.”

Using the Australian Synchrotron, Dr Czabotar and colleagues were able to obtain detailed three-dimensional images of Bax changing shape as it moved from its inactive to active form. The active form ruptures mitochondrial membranes, removing the cell’s energy supply and causing cell death.

“By using the powerful X-ray beams created by the synchrotron, we obtained structures of Bax that were really exciting,” Dr Czabotar said. “Bax is activated when small protein fragments called BH3-peptides bind to it. We saw that these peptides open up the Bax molecule like a key unlocking a padlock. This unlocked form of Bax can bind to another Bax molecule, which can then form larger Bax complexes that can go on to break up membranes in the cell.

“As well as explaining the detail of how cell death occurs, our research could provide clues about how to design potential new therapeutic agents that target Bax,” Dr Czabotar said. “Now that we can see how Bax changes its shape to move from the inactive to the active form, it may be possible to block Bax activation, to prevent cell death in conditions such as neurodegenerative disorders, where illness is caused by excessive cell death. Similarly, agents that drive Bax into its active form could force immortal cells such as cancer cells to die, providing the basis for a potential new class of anti-cancer agents.”