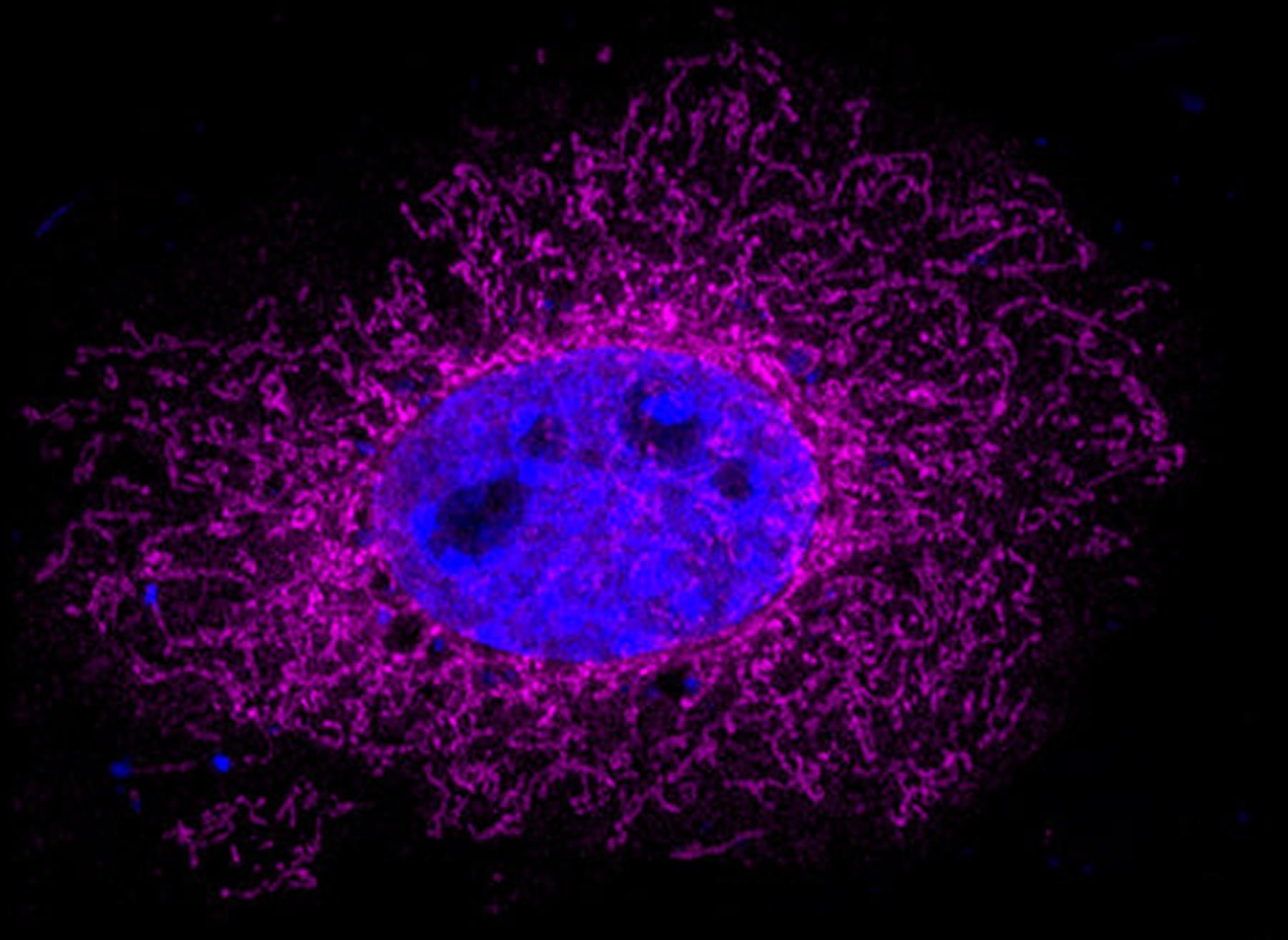 Summary: The ARHGAP11B protein located in mitochondria induces a metabolic pathway, similar to the characteristics of cancer cells, in brain stem cells, resulting in brain development.

The size of the human brain increased profoundly during evolution. A certain gene that is only found in humans triggers brain stem cells to form a larger pool of stem cells. As a consequence, more neurons can arise, which paves the way to a bigger brain. This brain size gene is called ARHGAP11B and so far, how it works was completely unknown. Researchers at the Max Planck Institute of Molecular Cell Biology and Genetics in Dresden now uncovered its mode of action. They show that the ARHGAP11B protein is located in the powerhouse of the cell – the mitochondria – and induces a metabolic pathway in the brain stem cells that is characteristic of cancer cells.

The research group of Wieland Huttner, a founding director of the Max Planck Institute of Molecular Cell Biology and Genetics, has been investigating the molecular mechanisms underlying the expansion of the brain during mammalian evolution for many years. In 2015, the group reported a key role for a gene that is only present in humans and in our closest extinct relatives, the Neanderthals and Denisovans. This gene, named ARHGAP11B, causes the so-called basal brain stem cells to expand in number and to eventually increase the production of neurons, leading to a bigger and more folded brain in the end. How the gene functions within the basal brain stem cells has been unknown so far.

Takashi Namba, a postdoctoral scientist in the research group of Wieland Huttner, wanted to find the answer to this question, together with colleagues from the Max Planck Institute, the University Hospital Carl Gustav Carus Dresden, and the Department of Medical Biochemistry at the Semmelweis University, Budapest. He found that the ARHGAP11B protein is located in mitochondria, the organelles that generate most of the cell’s source of chemical energy and hence are often referred to as the powerhouse of the cell. Takashi Namba explains the results: “We found that ARHGAP11B interacts with a protein in the membrane of mitochondria that regulates a membrane pore. As a consequence of this interaction, the pores in the membrane are closing up, preventing calcium leakage from the mitochondria. The resulting higher calcium concentration causes the mitochondria to generate chemical energy by a metabolic pathway called glutaminolysis. In this way, ARHGAP11B can trigger basal brain stem cells to form a larger pool of stem cells.”

Wieland Huttner, who supervised the study, highlights the perspectives of these findings: “An increase in glutaminolysis is a hallmark of highly proliferating cells, notably tumor cells. Thus, ARHGAP11B may have contributed to the evolutionary expansion of the human brain by inducing a cancer-like metabolism in the basal brain stem cells for a limited period during brain development.”

Summary
The human-specific gene ARHGAP11B is preferentially expressed in neural progenitors of fetal human neocortex and increases abundance and proliferation of basal progenitors (BPs), which have a key role in neocortex expansion. ARHGAP11B has therefore been implicated in the evolutionary expansion of the human neocortex, but its mode of action has been unknown. Here, we show that ARHGAP11B is imported into mitochondria, where it interacts with the adenine nucleotide translocase (ANT) and inhibits the mitochondrial permeability transition pore (mPTP). BP expansion by ARHGAP11B requires its presence in mitochondria, and pharmacological inhibition of ANT function or mPTP opening mimic BP expansion by ARHGAP11B. Searching for the underlying metabolic basis, we find that BP expansion by ARHGAP11B requires glutaminolysis, the conversion of glutamine to glutamate for the tricarboxylic acid (TCA) cycle. Hence, an ARHGAP11B-induced, mitochondria-based effect on BP metabolism that is a hallmark of highly mitotically active cells appears to underlie its role in neocortex expansion.