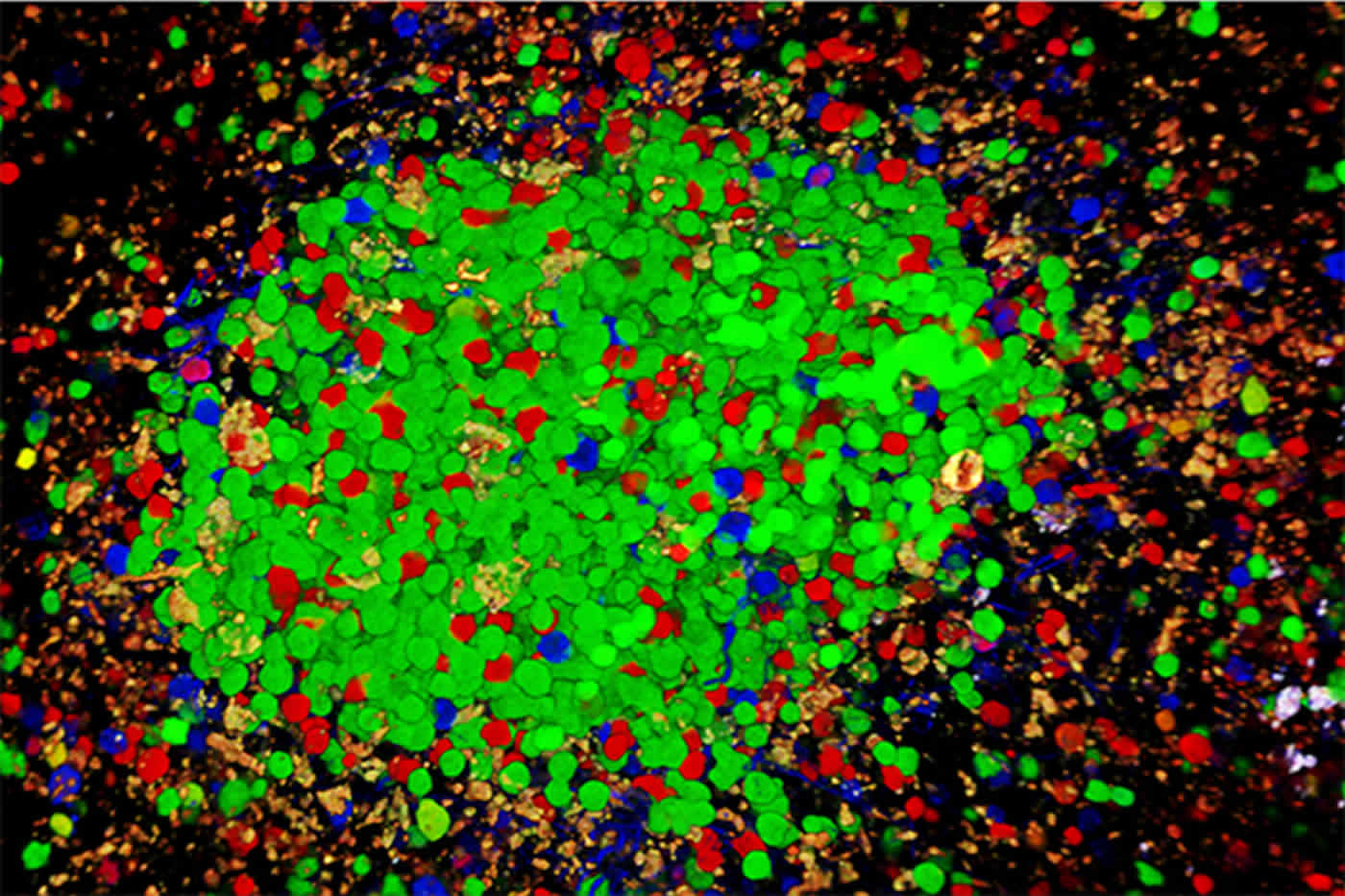 Summary: According to researchers, rogue B cells can trigger an override that may be responsible for autoimmune attacks and diseases.

A newly unveiled discovery, four years in the making, has the potential to change the way we look at autoimmune diseases and understand how and why immune cells begin to attack different tissues in the body.

“Once your body’s tolerance for its own tissues is lost, the chain reaction is like a runaway train,” said Michael Carroll, Harvard Medical School professor of pediatrics at Boston Children’s Hospital. “The immune response against your own body’s proteins, or antigens, looks exactly like it’s responding to a foreign pathogen.”

A team led by Carroll has spent years investigating mouse models of lupus to better understand the ins and outs of autoimmune diseases. Their latest findings, published in Cell, reveal that rogue B cells—immune cells that produce antibodies and program the immune system to attack certain antigens—can trigger an override that launches the body into an autoimmune attack. Adding insult to injury, B cells’ immune-targeting instructions can rapidly expand to order an attack on many more tissue types within the body.

Carroll, who is senior author on the new study, and his team think their findings can finally shed some new light on a biological phenomenon known as epitope spreading, which is when the immune system begins to go after antigens in other parts of the body that it wasn’t originally instructed to destroy.

Epitope spreading is a hallmark aspect of autoimmune disease, as it leads to widespread immune attack against the body’s own tissues. Understanding what triggers this phenomenon could open the door to new therapies designed to halt the autoimmune response in its tracks.

“It has been a longstanding observation in the clinic that autoimmune diseases evolve over time, attacking an ever-expanding array of organs and tissues,” said Søren Degn, a research fellow at Boston Children’s and first author of the new study. “This presents in the patient as a broadening of clinical symptoms, which can include joint pain, kidney damage and severe skin rashes. But, until now, we’ve largely been in the dark about how this process occurs.”

The immune system in living color

To understand what leads to epitope spreading, Carroll’s team used what is called a confetti technique—aptly named for its colorful appearance in imaging—in a mouse model of the autoimmune disease commonly called lupus. 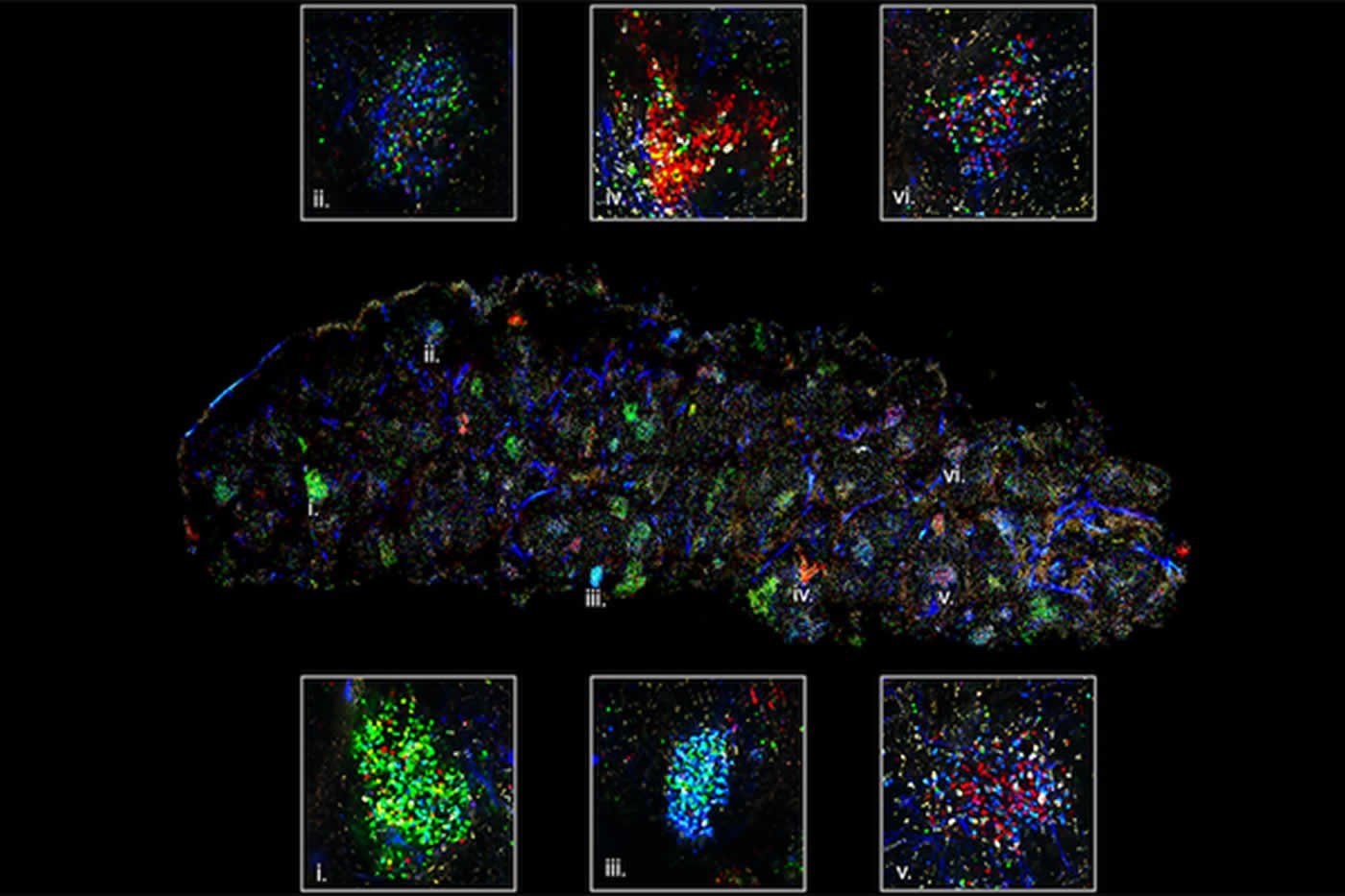 The confetti technique reveals germinal center activity in the spleen. Each color represents a specific B-cell antibody clone. The B cells battle within germinal centers to produce the most effective antibody for a given antigen. Credit: Carroll lab.

“Lupus is known as ‘the great imitator’ because the disease can have so many different clinical presentations resembling other common conditions,” said Degn, who is also assistant professor of biomedicine at Aarhus University in Denmark. “It’s a multi-organ disease with a plethora of potential antigenic targets, tissues affected and immune players involved. Lupus is considered a prototypic autoimmune disease, which is why it’s so interesting to study.”

Studying mice, the team used fluorescent marker proteins to distinguish between different B cells. When the body senses an antigen (a protein that is—or in the case of autoimmune disease, appears to be—foreign), B cells aggregate in cellular clusters called germinal centers.

“That’s why at the onset of a cold or sore throat, lymph nodes become swollen—they are filling with germinal centers to ready an immune counterattack,” said Cees van der Poel, a co-author on the study and a postdoctoral fellow in Carroll’s lab. “The spleen is another site that germinal centers form in.”

In these germinal centers, B cells make competing antibodies in response to the detected antigen, battling each other to create the best antibody for the job of neutralizing the invading threat. Eventually, the best B cell clone with the most effective antibody wins out, and, in concert with other immune cells, activates an attack. However, this highly effective process can wreak havoc if the body incorrectly senses an “autoantigen” on one of its own tissue types.

By using fluorescent colors to differentiate between B cell clones, Carroll’s team watched the same germinal center activity happen during an autoimmune response. The colored B cells battled to create an autoantibody in a model of lupus.

“It’s truly natural selection in a microcosm,” said van der Poel. “Once activated, there are ten different possible colors to represent different B cell clones. Over a week or two, the color diversity begins to shift. Eventually one color dominates, representing a single clone winning out.” 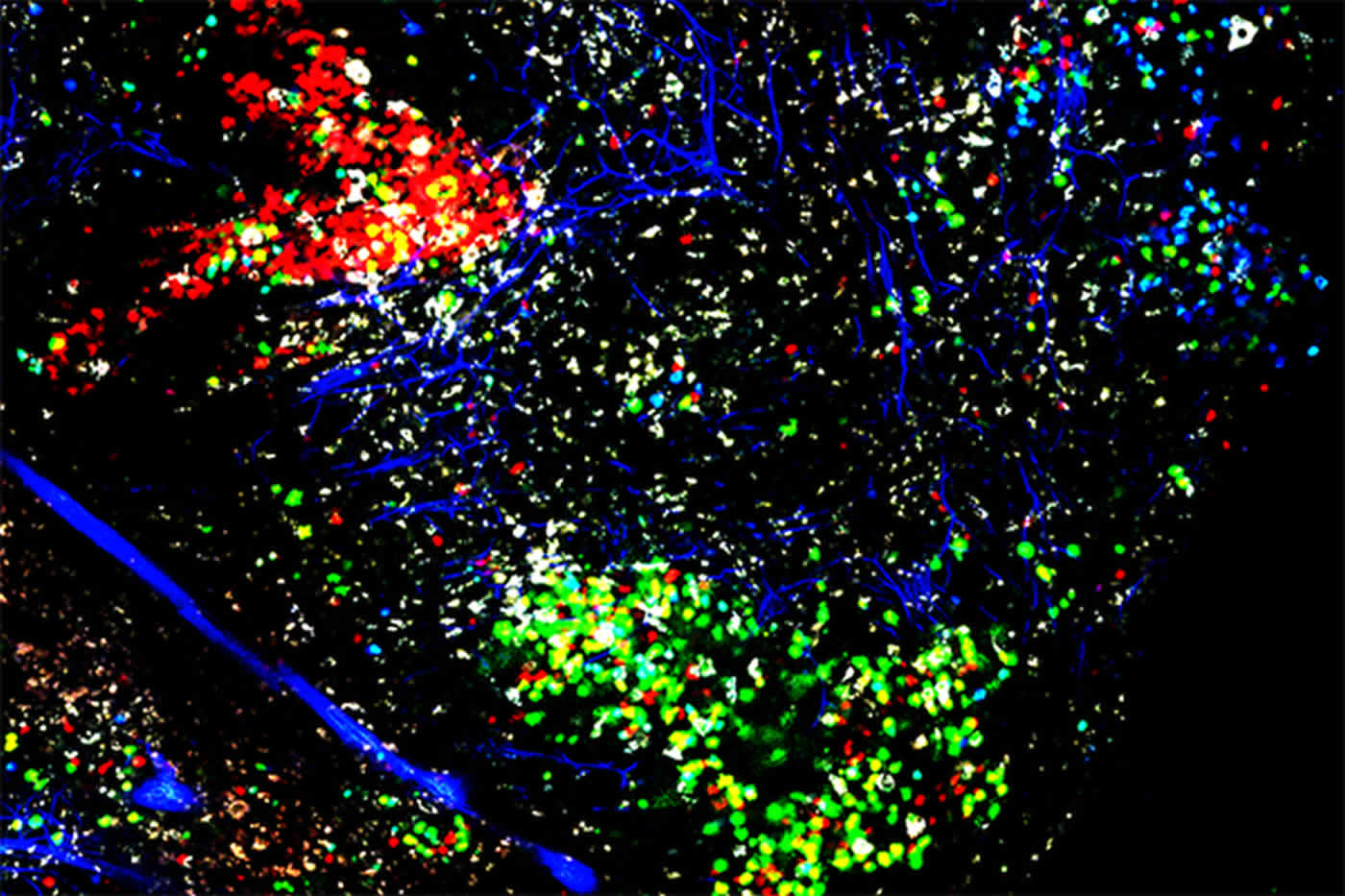 Neighboring germinal centers of the spleen in a mouse model of lupus: “Red” and “green” B cells emerge as producers of the best autoantibodies. Credit: Carroll lab.

Once the autoimmune response is triggered, Carroll says the “runaway train pulls out of the station,” and the immune system begins to go after other, similar autoantigens elsewhere in the body.

“Over time, the B cells that initially produce the ‘winning’ autoantibodies begin to recruit other B cells to produce additional damaging autoantibodies—just as ripples spread out when a single pebble is dropped into water,” said Degn.

“This finding was such a surprise,” said Carroll. “It not only tells us that autoreactive B cells are competing inside germinal centers to design an autoantibody, but then we also see that the immune response broadens to attack other tissues in the body, leading to epitope spreading at the speed of wildfire.”

Now, with their confetti mouse model that allows them to observe loss of self-tolerance and autoreactive epitope spreading, the team will further interrogate how the complex dance between inflammation, natural cell death and removal by the immune system and antigens inside cell nuclei might exacerbate B-cell production of autoantibodies.

For now, the team says, understanding how B-cell activity in germinal centers relates to epitope spreading is a leap in the right direction. They speculate that a therapy that blocks germinal centers, which act as the immune system’s working memory, might one day be used to halt the vicious cycle of autoimmune diseases.

“Blocking germinal centers in the midst of an autoimmune response could potentially block the epitope spreading process,” said Carroll. “If you could stop the adaptive immune system for a transient amount of time, it might allow the body to reset its immune responses and shut off the autoreactivity.”

Summary
Germinal centers (GCs) are the primary sites of clonal B cell expansion and affinity maturation, directing the production of high-affinity antibodies. This response is a central driver of pathogenesis in autoimmune diseases, such as systemic lupus erythematosus (SLE), but the natural history of autoreactive GCs remains unclear. Here, we present a novel mouse model where the presence of a single autoreactive B cell clone drives the TLR7-dependent activation, expansion, and differentiation of other autoreactive B cells in spontaneous GCs. Once tolerance was broken for one self-antigen, autoreactive GCs generated B cells targeting other self-antigens. GCs became independent of the initial clone and evolved toward dominance of individual clonal lineages, indicating affinity maturation. This process produced serum autoantibodies to a breadth of self-antigens, leading to antibody deposition in the kidneys. Our data provide insight into the maturation of the self-reactive B cell response, contextualizing the epitope spreading observed in autoimmune disease.