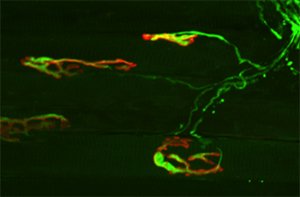 Mouse nerve axons (green) connect to muscle synapses (red) to coordinate movement. Three days after injury, these axons are protected from degeneration because they are missing Phr1, a gene involved in removing damaged axons from the body. In mice that have the gene, injured green axons fragment and disappear by the third day, leaving the red muscle synapses without nerve connections. Credited to Elisabetta Babetto, PhD Washington University at St. Louis.
Home
Featured

Many medical issues affect nerves, from injuries in car accidents and side effects of chemotherapy to glaucoma and multiple sclerosis. The common theme in these scenarios is destruction of nerve axons, the long wires that transmit signals to other parts of the body, allowing movement, sight and sense of touch, among other vital functions.

Now, researchers at Washington University School of Medicine in St. Louis have found a way the body can remove injured axons, identifying a potential target for new drugs that could prevent the inappropriate loss of axons and maintain nerve function.

“Treating axonal degeneration could potentially help a lot of patients because there are so many diseases and conditions where axons are inappropriately lost,” says Aaron DiAntonio, MD, PhD, professor of developmental biology. “While this would not be a cure for any of them, the hope is that we could slow the progression of a whole range of diseases by keeping axons healthy.”

DiAntonio is senior author of the study that appears online May 9 in the journal Cell Reports.

While axonal degeneration appears to be a major culprit in diseases like multiple sclerosis, it also paradoxically plays an important role in properly wiring the nervous systems of developing embryos.

“When an embryo is building its nervous system, there can be inappropriate or excessive axonal sprouts, or axons that are only needed at one time in development and not later,” DiAntonio says. “These axons degenerate, and that’s very important for wiring the nervous system. And in adult organisms, it might be useful to have a clean and quick way to remove a damaged axon from a healthy nerve, instead of letting it decay and potentially damage its neighboring axons.”

DiAntonio compares the process to programmed cell death, or apoptosis, which is also important in embryonic development. Apoptosis culls unnecessary or damaged cells from the body. If cell death programs become overactive, they can kill healthy cells that should remain. And if apoptosis fails to destroy damaged cells in adults, it can lead to cancer.

The new discovery also underscores the relatively recent understanding that loss of axons is not a passive decay process resulting from injury. Just as apoptosis actively destroys cells, axonal degeneration results from a cellular program that actively removes the damaged axon. In certain diseases, the program may be inappropriately triggered.

“We want to understand axonal degeneration at the same level that we understand programmed cell death, in the hopes of developing drugs to block the process when it becomes overactive,” DiAntonio says.

Studying mice, the researchers found that a gene called Phr1 plays a major role in governing the self-destruction of injured axons. When they removed Phr1 from adult mice, the severed portion of the axons remained intact for much longer than in genetically normal mice.

In the normal mice, a severed axon degenerated entirely after two days. In mice without Phr1, they found that about 75 percent of the severed axons remained at five days, with a quarter persisting at least 10 days after being cut. The mice showed no side effects and suffered no obvious problems due to the missing Phr1.

The findings raise the possibility that blocking the Phr1 protein with a drug could keep damaged axons alive and functional when the body would normally cause the axons to self-destruct.

DiAntonio emphasizes that he is not trying to save axons that have no connection to the rest of the nerve. The paradigm is simply a good way to model nerve injury. In many instances, such as a crush injury or disease processes in which the axon is not severed, blocking the Phr1 protein could potentially preserve an attached axon that would otherwise self-destruct.

Importantly, the research team also looked at optic nerves of the central nervous system, which are damaged in glaucoma, and found similar protective effects from the loss of Phr1.

DiAntonio also points out possible ways to help cancer patients. Many chemotherapy drugs cause damage to peripheral axons, which may limit the doses a patient can tolerate.

As part of the new study, the researchers showed that intact axons without Phr1 were protected from the damage caused by vincristine, a chemotherapy drug used to treat leukemia, neuroblastoma, Hodgkin’s disease and non-Hodgkin’s lymphoma, among other cancers.

Notes about this axonal degeneration and neurogenetics research

This work was supported by the American-Italian Cancer Foundation, the European Molecular Biology Organization, the Muscular Dystrophy Association and the National Institutes of Health (NIH) grant numbers DA020812, NS065053 and NS078007.