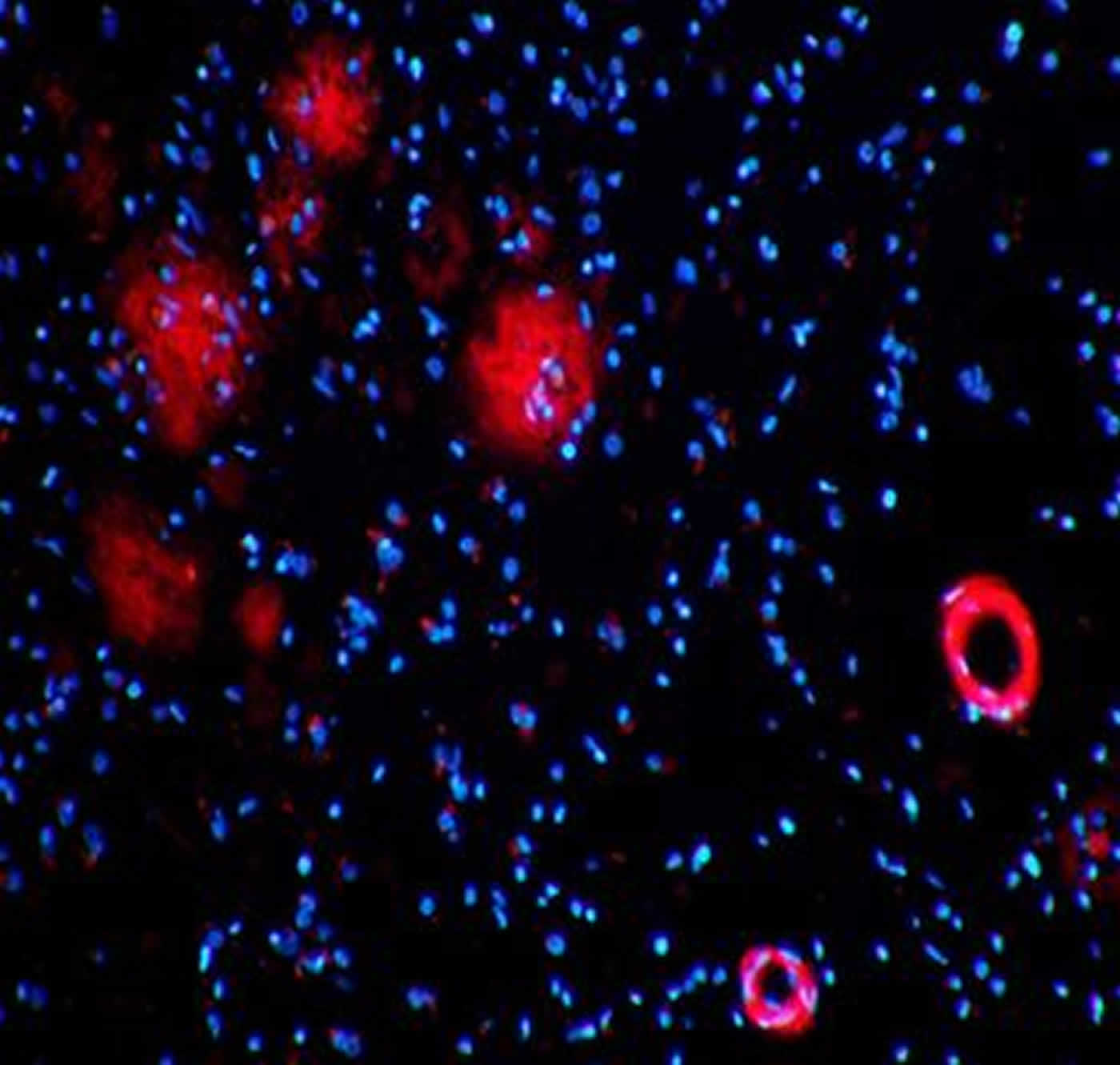 A human donor Alzheimer's disease brain tissue stained with an agent called 'congo-red', which allows for the visualization of amyloid-beta plaques (red) in the brain and surrounding blood vessels. Blue stains show the nuclei of the cells in the brain. Credit: Dr. Matthew Campbell, 2015.

A Major Breakthrough in Understanding of Alzheimer’s Disease Reported

Scientists at Trinity College Dublin have shed light on a fundamental mechanism underlying the development of Alzheimer’s disease, which could lead to new forms of therapy for those living with the condition.

Alzheimer’s is the most common form of dementia globally and affects up to 40,000 people in Ireland today. It is the fourth leading cause of death in individuals over the age of 65 and it is the only cause of death among the top ten that cannot be prevented, cured or even slowed down.

The condition is classically associated with memory loss. However, other symptoms and warning signs include difficulty performing familiar tasks, problems with language such as forgetting phrases or words, and changes in mood, behaviour and personality.

Alzheimer’s disease is characterized, in part, by the build-up of a small protein (‘amyloid-beta’) in the brains of patients. Impaired clearance of this protein appears to be a major factor in the build-up of plaques, and then in the disease process itself. While the mode by which amyloid-beta is cleared remains unclear, it is evident that it needs to be removed from the brain via the bloodstream.

Unlike blood vessels anywhere else in the body, those in the brain have properties that strictly regulate what gets in and out of the delicate tissue – this is what is known as the blood-brain barrier (BBB). The BBB functions as a tightly regulated site of energy and metabolite exchange between the brain tissue and the bloodstream.

“We have shown that distinct components of these blood vessels termed tight junctions are altered in Alzheimer’s disease. We think that this alteration could be an entrained mechanism to allow for the clearance of toxic amyloid-beta from the brain in those living with Alzheimer’s disease,” said postdoctoral researcher in Trinity’s School of Genetics and Microbiology, Dr. James Keaney, who spearheaded the study.

Working with the Dublin Brain Bank, which is based in Beaumont Hospital, the researchers from Trinity examined brain tissues of individuals who were affected by Alzheimer’s disease during their lifetime and then compared results to those observed in model systems in the laboratory.

Research Assistant Professor in Genetics at Trinity, Dr. Matthew Campbell, added: “Our recent findings have highlighted the importance of understanding diseases at the molecular level. The concept of periodic clearance of brain amyloid-beta across the BBB could hold tremendous potential for Alzheimer’s patients in the future. The next steps are to consider how this might be achieved.

“Given the recent advances in clinical trials of anti-amyloid beta antibodies, we hope our findings may lead to improved and adjunctive forms of therapy for this devastating condition.”

About this Alzheimer’s Disease research

Autoregulated paracellular clearance of amyloid-β across the blood-brain barrier

The blood-brain barrier (BBB) is essential for maintaining brain homeostasis and protecting neural tissue from damaging blood-borne agents. The barrier is characterized by endothelial tight junctions that limit passive paracellular diffusion of polar solutes and macromolecules from blood to brain. Decreased brain clearance of the neurotoxic amyloid-β (Aβ) peptide is a central event in the pathogenesis of Alzheimer’s disease (AD). Whereas transport of Aβ across the BBB can occur via transcellular endothelial receptors, the paracellular movement of Aβ has not been described. We show that soluble human Aβ(1–40) monomers can diffuse across the paracellular pathway of the BBB in tandem with a decrease in the tight junction proteins claudin-5 and occludin in the cerebral vascular endothelium. In a murine model of AD (Tg2576), plasma Aβ(1–40) levels were significantly increased, brain Aβ(1–40) levels were decreased, and cognitive function was enhanced when both claudin-5 and occludin were suppressed. Furthermore, Aβ can cause a transient down-regulation of claudin-5 and occludin, allowing for its own paracellular clearance across the BBB. Our results show, for the first time, the involvement of the paracellular pathway in autoregulated Aβ movement across the BBB and identify both claudin-5 and occludin as potential therapeutic targets for AD. These findings also indicate that controlled modulation of tight junction components at the BBB can enhance the clearance of Aβ from the brain.