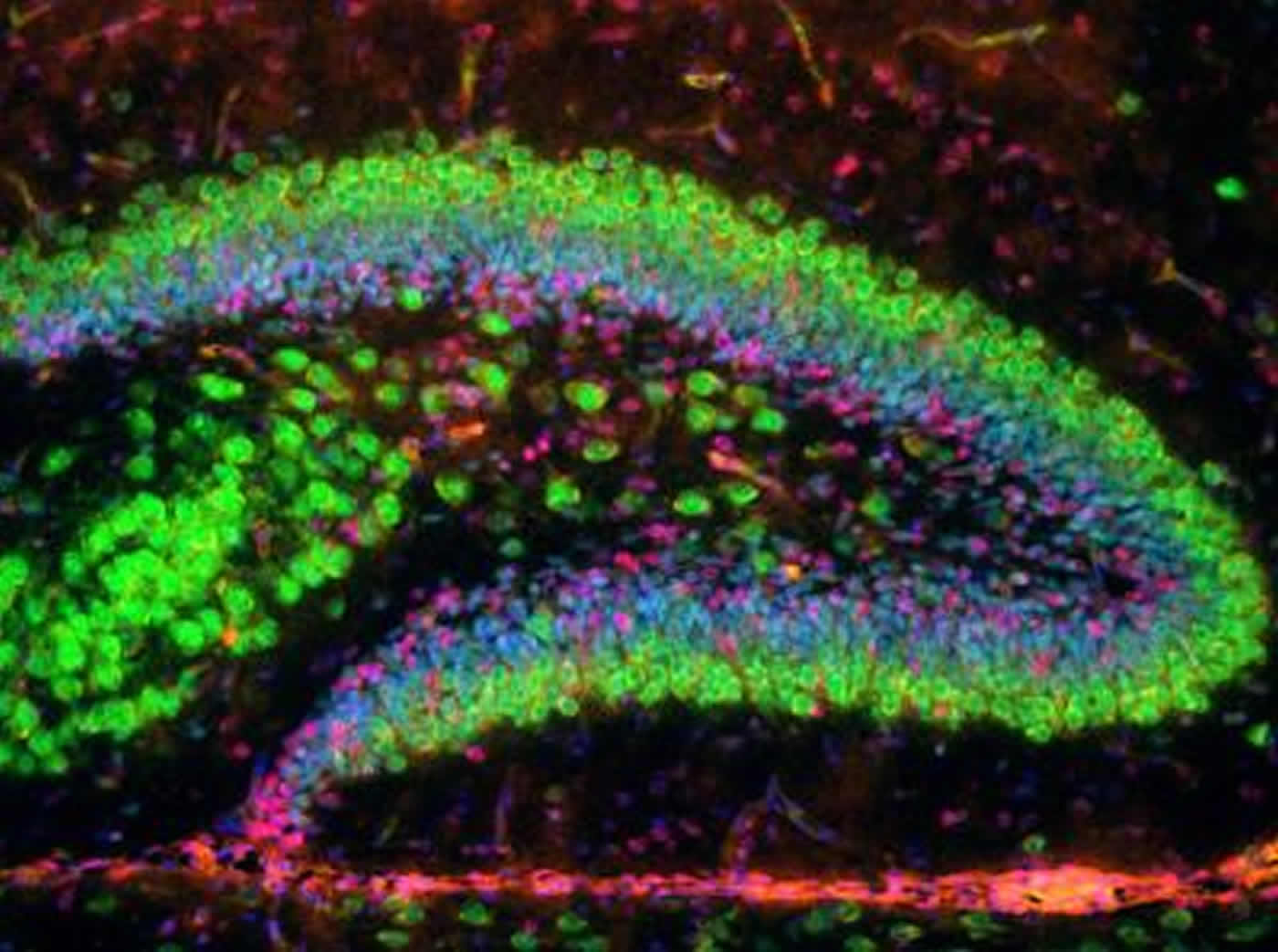 The dentate gyrus of the mouse hippocampal formation which contributes to the formation of new episodic memories stained for neurons (green) and stem cells (red). NeuroscienceNews.com image is credited to Andrew L Bashford and Vasanta Subramanian University of Bath.

New Areas of the Brain Identified Where ALS Gene is Active

Summary: Researchers report they have identified two regions of a mouse brain where a gene implicated in ALS is expressed.

University of Bath scientists identify 2 regions of mouse brains where C9orf72 is expressed.

For the first time novel expression sites in the brain have been identified for a gene which is associated with Motor Neuron Disease and Frontotemporal Dementia.

A team from the Department of Biology & Biochemistry at the University of Bath discovered for the first time that the C9orf72 gene is strongly expressed in the hippocampus of the mouse brain- a region where adult stem cells reside and which is known to be important for memory.

C9orf72 is also expressed at the olfactory bulb, involved in the sense of smell. Loss of smell is sometimes a symptom in FTD.

They also found that the C9orf72 protein changes from being concentrated in the cytoplasm of cells to both the cytoplasm and nucleus as the brain cortex develops, and during the development of neurons.

Dr Vasanta Subramanian, who led the study, said: “By uncovering novel sites of expression in the brain our findings provide an important resource for researchers studying animal models of C9orf72 mediated ALS and FTD.

“It is essential to know in which cell types in the nervous system the C9orf72 gene is expressed and where within the cell the C9orf72 protein is present.

“Our hope is that by researching accurate animal models of these diseases scientists can eventually develop new treatments and eventually cures for these devastating degenerative diseases.”

The researchers, Ross Ferguson, Eleni Serafeimidou- Pouliou and Vasanta Subramanian, were working to map expression of C9orf72 in developing and adult mouse brains to help characterise reliable animal models to study the gene and its effects in both kinds of neurodegenerative diseases, for which there are currently no cures.

Dr Brian Dickie, Director of Research Development at the Motor Neurone Disease Association, said: “It is unclear why people who carry an abnormality in genes like c9orf72 don’t usually develop symptoms of these diseases until several decades after birth, but it is possible that the activity of the gene early in life somehow ‘primes’ certain types of neuron to degenerate later in life.

“This detailed study provides a platform for future research to understand the role of this important gene in health and disease.”

The exact function of C9orf72 in humans and animals remains unknown, but in the mutated version in patients there are large stretches of abnormal repeated sequences.

The study is published in the Journal of Anatomy.

The findings also confirmed previous research showing C9orf72 is strongly expressed in the cerebellum and motor cortex of the brain.

About this ALS research article

Other authors of the Current Biology paper include Bradley Vaughn, MD, professor of neurology at UNC, Sankar Alagapan, PhD, a postdoctoral researcher in the Frohlich lab, Juliann Mellin, the research study coordinator for the Frohlich lab, and Michael Boyle, a graduate student in the UNC/NC State biomedical engineering department.

Funding: This study was supported by the National Institutes of Health, UNC Department of Psychiatry, UNC School of Medicine, Swiss National Science Foundation.

The hexanucleotide repeat in the first intron of the C9orf72 gene is the most significant cause of amyotropic lateral sclerosis as well as some forms of fronto-temporal dementia. The C9orf72 protein has been previously reported to be expressed in post-mortem human brain as well as in late embryonic and some postnatal stages in mice. Herein, we present a detailed study of the distribution of C9orf72 protein in the embryonic, postnatal and adult mouse brain, spinal cord as well as during the differentiation of P19 embryonal carcinoma cells to neurons including motor neurons. We show that the expression levels of the C9orf72 transcripts in the developing and adult mouse brain as well as in differentiating neurons, are dynamic. Besides the strong expression in the cerebellum and motor cortex reported previously, we show for the first time that C9orf72 is expressed strongly in the olfactory bulb and also in the hippocampus. Our immunostaining data also reveal a hitherto unreported switch in the cellular distribution of C9orf72 from a predominantly cytoplasmic to a nucleo-cytoplasmic distribution during corticogenesis. This switch in distribution was also observed during differentiation of the pluripotent embryonal carcinoma P19 cell line to mature neurons. Our findings have implications for interpreting the pathophysiology caused by the repeat expansions in C9orf72 in mouse models.

Friend or Foe? How Mice Decide to Make Love or War