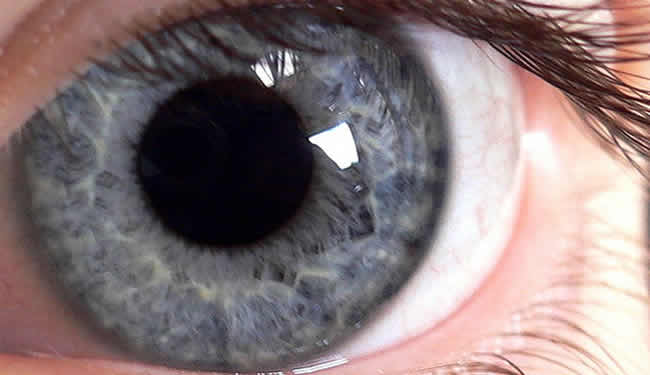 Calabresi and his colleagues used optical coherence tomography (OCT) to scan nerves deep in the back of the eye, applying special software they co-developed that is capable of assessing previously immeasurable layers of the light-sensitive retinal tissue.
Home
Featured

Using the Eye as a Window into the Brain

An inexpensive, five-minute eye scan can accurately assess the amount of brain damage in people with the debilitating autoimmune disorder multiple sclerosis (MS), and offer clues about how quickly the disease is progressing, according to results of two Johns Hopkins studies.

“The eye is the window into the brain and by measuring how healthy the eye is, we can determine how healthy the rest of the brain is,” says Peter A. Calabresi, M.D., a professor of neurology at the Johns Hopkins University School of Medicine, and leader of the studies described in recent issues of The Lancet Neurology and the Archives of Neurology. “Eye scans are not that expensive, are really safe, and are widely used in ophthalmology, and now that we have evidence of their predictive value in MS, we think they are ready for prime time. We should be using this new quantitative tool to learn more about disease progression, including nerve damage and brain atrophy.”

Calabresi and his colleagues used optical coherence tomography (OCT) to scan nerves deep in the back of the eye, applying special software  they co-developed that is capable of assessing previously immeasurable layers  of the light-sensitive retinal tissue. The scan uses no harmful radiation and is one-tenth the cost of an MRI. The software will soon be widely available commercially.

In the Lancet paper, Calabresi and his team reported measuring thickness or swelling of the inner nuclear layer of the retina in 164 patients with MS and 60 healthy controls, following changes in these tissues over four years. At the same time, they also used brain MRI to measure inflammation spots directly, and performed clinical tests to determine disability levels.

The more inflammation and swelling the researchers found in the retinas of the MS patients, the more inflammation showed up in their brain MRIs. The correlation, they said, affirmed the value of the retinal scans as a stand-alone surrogate for brain damage. Having such information so easily available could allow physicians to accurately tell how far the disease has progressed, and to better advise patients about how they should proceed with their care.

The researchers also found microcystic macular edema in the central part of the retinas of 10 of the MS patients, tiny pockets of fluid typically found in older, usually diabetic people. While Calabresi cautions that eye scans do not as yet have primary diagnostic value for MS, he says finding a cyst like this on the eye of a young, healthy person might be reason to have her evaluated for the disorder.

In the United States, there are roughly 400,000 people living with MS. The disorder typically strikes between the ages of 20 and 50 and affects two-to-three times as many women as men.

In the paper published in the Archives of Neurology, Calabresi and colleagues looked at eye and brain scans of 84 MS patients and 24 healthy controls. This time, they focused on two other deep retinal layers, the ganglion cell layer + inner plexiform layer (GCL+IPL), and the peripapillary retinal nerve fiber layer (pRFNL). Greater cell wasting in those areas was strongly correlated with more atrophy in the gray matter of the brain, signifying more nerve damage from MS. Gray matter consists of the part of the brain where nerve cells live, and plays a role similar to a computer’s hard drive, in contrast to white matter that is more like the wiring that sends information out from the brain to the spinal cord and the rest of the body’s nerves.

Calabresi, director of the Johns Hopkins Multiple Sclerosis Center, says this finding is particularly important because neurodegeneration is so difficult to accurately gauge. In a young person with MS, the brain may be atrophying but may cause no symptoms because the brain is able to compensate for what is being lost. Ultimately, though, the loss of brain cells becomes apparent and is irreversible. Calabresi says that if he saw the kind of thickness on an eye scan indicating severe atrophy, he would consider a patient’s prognosis less encouraging than someone with a healthy retina, and this information may guide physicians to treat more aggressively. For example, he says he would likely redouble efforts to enter a patient into a clinical trial for an experimental medication before too much permanent damage takes place.

Calabresi says his findings could also shift how researchers approach MS, long believed to be caused by an immune system that wrongly attacks the fatty protein called myelin that insulates nerves and helps them send electrical signals that control movement, speech and other functions. The usefulness of the scans raises the possibility that there could be something else going on, as there is no myelin deep in the retina of the eye. If the immune system is going after something else along with myelin, it could help researchers find new medications to target the incapacitating symptoms of MS, such as blurred vision, numbness and weakness.

“It is really important to know what the immune system is attacking,” he says. “The treatments we have right now are only moderately effective, so maybe we’re not blocking the right kinds of cells.”

Both studies were funded by grants from the National Multiple Sclerosis Society, the National Eye Institute (RO1 EY014993 and RO1 EY019473), and the Braxton Debbie Angela Dillon and Skip (DADS) Donor Advisor Fund.