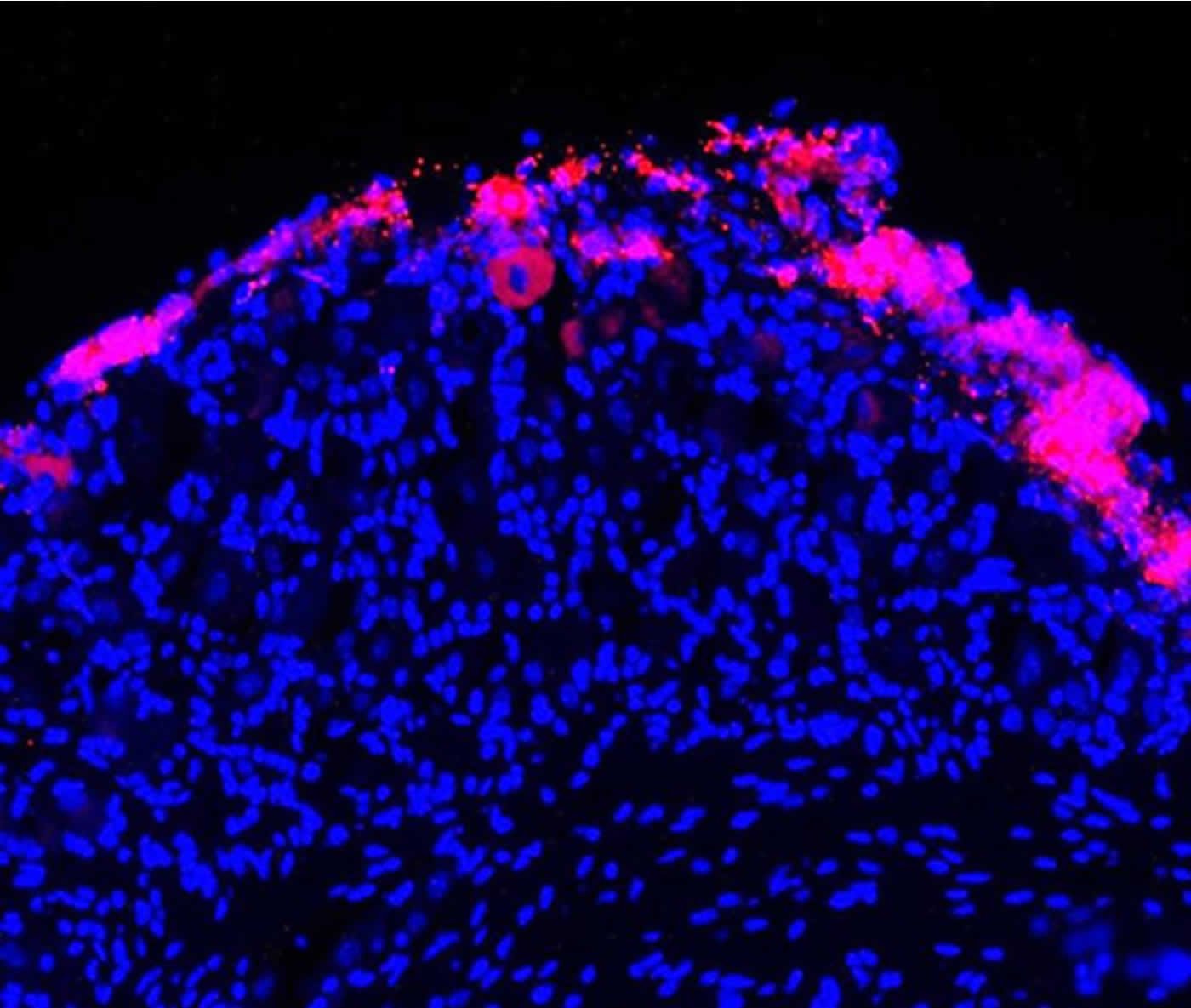 Bone marrow stromal cells (in red) infused into the spinal cord of mice with nerve injuries migrate to the site of injury and are still present four weeks after treatment. Image credit: Gang Chen, Duke University.

Lasting Relief From Chronic Pain Thanks to Stem Cells

One protein helps cell-based therapy remain in the spinal cord.

Chronic pain caused by the nerve damage of type 2 diabetes, surgical amputation, chemotherapy and other conditions is especially intractable because it resists painkilling medications.

But in a study on mice, a Duke University team has shown that injections of stem cells from bone marrow might be able to relieve this type of neuropathic pain. The researchers say their findings, which appear July 13 in the Journal of Clinical Investigation, may also advance cell-based therapies in chronic pain conditions, lower back pain and spinal cord injuries.

The team used a type of stem cell known as bone marrow stromal cells (BMSCs), which are known to produce an array of healing factors and can be coaxed into forming most other types of cells in the body.

Stromal cells are already being tested in small-scale clinical studies of people with inflammatory bowel disease, heart damage and stroke. They have also shown promise for treating pain. However, it’s not clear how they work.

“Based on these new results, we have the know-how and we can further engineer and improve the cells to maximize their beneficial effects,” said Ru-Rong Ji, professor of anesthesiology and neurobiology in the Duke School of Medicine.

In his team’s study, the researchers used stromal cells to treat mice with pain caused by nerve damage. They delivered the cells by a lumbar puncture, infusing them into the fluid that bathes the spinal cord.

Mice treated with the bone marrow stromal cells were much less sensitive to painful stimuli after their nerve injury compared with the untreated mice, the researchers found.

“This analgesic effect was amazing,” Ji said. “Normally, if you give an analgesic, you see pain relief for a few hours, at most a few days. But with bone marrow stem cells, after a single injection we saw pain relief over four to five weeks.”

Pictures of the animals’ spinal cords showed that the injected stem cells had set up shop alongside the nerve cells in the spinal cord.

To understand how the stem cells alleviated pain, the researchers measured levels of anti-inflammatory molecules that had been previously linked to pain, finding that one in particular, TGF-β1, was present in higher amounts in the spinal fluid of the stem cell-treated animals compared with the untreated animals.

TGF-β1 is a protein that is typically secreted by immune cells and is common throughout the body. Research has shown that people with chronic pain have too little TGF-β1, Ji said.

In the new study, chemically neutralizing TGF-β1 reversed the pain-killing benefit of the BMSCs, suggesting that the secretion of this protein was a major reason why the cells helped with pain. Injecting TGF-β1 directly into spinal cord fluid provides relief too, but only for a few hours, Ji said.

By contrast, bone marrow stromal cells stay on site for as much as three months after the infusion, the scientists found. This is the right length of time, Ji said, because if the stem cells stayed permanently there could be risk of them becoming cancerous.

Importantly, BMSCs also migrate to the site of injury. That’s because a molecule emitted from the injured nerve cells called CXCL12 — which has also previously been linked to neuropathic pain — acts as a homing signal of sorts, attracting the stem cells.

Alzheimer’s Disease Causes Cells to Overheat and ‘Fry Like Eggs’

The next step will be to find a way to make the stromal cells more efficient. “If we know TGF-β1 is important, we can find a way to produce more of it,” Ji said. In addition, the cells may produce other pain-relieving molecules; Ji’s group is working to identify those.

About this chronic pain research