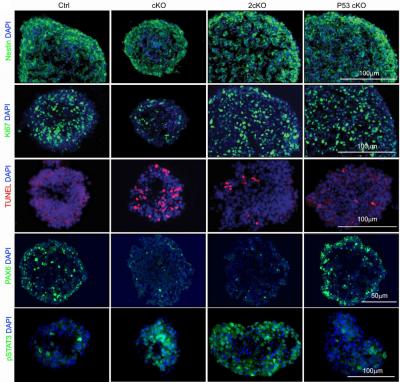 These colorful images show the importance of the FIP200 gene to neural stem cell activity and ability to become any type of brain or nerve cell. The second column of images is from mice that lack FIP200, compared with normal mice (first column) and mice that lacked the p53 gene in addition FIP200 third column) or alone (fourth column). Image credited to Guan Laboratory, University of Michigan.
Home
Featured

Spring Cleaning in Your Brain: Stem Cell Research Shows How Important Autophagy Is

Deep inside your brain, a legion of stem cells lies ready to turn into new brain and nerve cells whenever and wherever you need them most. While they wait, they keep themselves in a state of perpetual readiness – poised to become any type of nerve cell you might need as your cells age or get damaged.

Now, new research from scientists at the University of Michigan Medical School reveals a key way they do this: through a type of internal “spring cleaning” that both clears out garbage within the cells, and keeps them in their stem-cell state.

In a paper published online in Nature Neuroscience, the U-M team shows that a particular protein, called FIP200, governs this cleaning process in neural stem cells in mice. Without FIP200, these crucial stem cells suffer damage from their own waste products — and their ability to turn into other types of cells diminishes.

It is the first time that this cellular self-cleaning process, called autophagy, has been shown to be important to neural stem cells.

The findings may help explain why aging brains and nervous systems are more prone to disease or permanent damage, as a slowing rate of self-cleaning autophagy hampers the body’s ability to deploy stem cells to replace damaged or diseased cells. If the findings translate from mice to humans, the research could open up new avenues to prevention or treatment of neurological conditions.

In a related review article just published online in the journal Autophagy, the lead U-M scientist and colleagues from around the world discuss the growing evidence that autophagy is crucial to many types of tissue stem cells and embryonic stem cells as well as cancer stem cells.

As stem cell-based treatments continue to develop, the authors say, it will be increasingly important to understand the role of autophagy in preserving stem cells’ health and ability to become different types of cells.

“The process of generating new neurons from neural stem cells, and the importance of that process, is pretty well understood, but the mechanism at the molecular level has not been clear,” says Jun-Lin Guan, Ph.D., the senior author of the FIP200 paper and the organizing author of the autophagy and stem cells review article. “Here, we show that autophagy is crucial for maintenance of neural stem cells and differentiation, and show the mechanism by which it happens.”

Guan is a professor in the Molecular Medicine & Genetics division of the U-M Department of Internal Medicine, and in the Department of Cell & Developmental Biology.

A long path to discovery

The new discovery, made after 15 years of research with funding from the National Institutes of Health, shows the importance of investment in lab science – and the role of serendipity in research.

Guan has been studying the role of FIP200 — whose full name is focal adhesion kinase family interacting protein of 200 kD – in cellular biology for more than a decade. Though he and his team knew it was important to cellular activity, they didn’t have a particular disease connection in mind. Together with colleagues in Japan, they did demonstrate its importance to autophagy – a process whose importance to disease research continues to grow as scientists learn more about it.

Several years ago, Guan’s team stumbled upon clues that FIP200 might be important in neural stem cells when studying an entirely different phenomenon. They were using FIP200-less mice as comparisons in a study, when an observant postdoctoral fellow noticed that the mice experienced rapid shrinkage of the brain regions where neural stem cells reside.

“That effect was more interesting than what we were actually intending to study,” says Guan, as it suggested that without FIP200, something was causing damage to the home of neural stem cells that normally replace nerve cells during injury or aging.

What Makes People Willing to Risk Their Lives to Save Others?

In 2010, they worked with other U-M scientists to show FIP200’s importance to another type of stem cell, those that generate blood cells. In that case, deleting the gene that encodes FIP200 leads to an increased proliferation and ultimate depletion of such cells, called hematopoietic stem cells.

But with neural stem cells, they report in the new paper, deleting the FIP200 gene led neural stem cells to die and ROS levels to rise. Only by giving the mice the antioxidant n-acetylcysteine could the scientists counteract the effects.

“It’s clear that autophagy is going to be important in various types of stem cells,” says Guan, pointing to the new paper in Autophagy that lays out what’s currently known about the process in hematopoietic, neural, cancer, cardiac and mesenchymal (bone and connective tissue) stem cells.

Guan’s own research is now exploring the downstream effects of defects in neural stem cell autophagy – for instance, how communication between neural stem cells and their niches suffers. The team is also looking at the role of autophagy in breast cancer stem cells, because of intriguing findings about the impact of FIP200 deletion on the activity of the p53 tumor suppressor gene, which is important in breast and other types of cancer. In addition, they will study the importance of p53 and p62, another key protein component for autophagy, to neural stem cell self-renewal and differentiation, in relation to FIP200.

The research was supported by National Institute of General Medical Sciences grant GM052890.