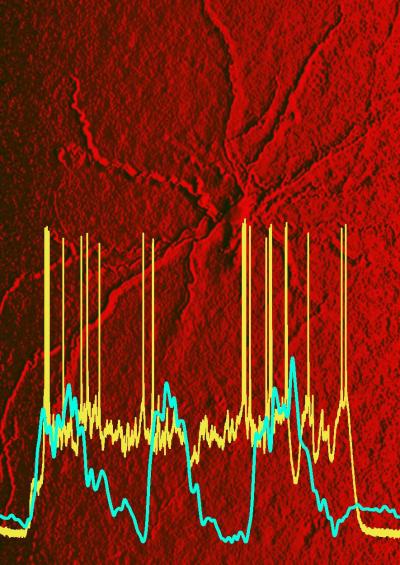 In the background is an entorhinal cortex neuron that was studied. The blue-green trace shows neocortical slow oscillation while the yellow trace shows the persistent activity of entorhinal cortical neuron, even when the inputs from neocortex were silent. Image credited to Mayank Mehta.
Home
Electrophysiology

UCLA researchers have for the first time measured the activity of a brain region known to be involved in learning, memory and Alzheimer’s disease during sleep. They discovered that this part of the brain behaves as if it’s remembering something, even under anesthesia, a finding that counters conventional theories about memory consolidation during sleep.

The research team simultaneously measured the activity of single neurons from multiple parts of the brain involved in memory formation. The technique allowed them to determine which brain region was activating other areas of the brain and how that activation was spreading, said study senior author Mayank R. Mehta, a professor of neurophysics in UCLA’s departments of neurology, neurobiology, physics and astronomy.

In particular, Mehta and his team looked at three connected brain regions in mice – the new brain or the neocortex, the old brain or the hippocampus, and the entorhinal cortex, an intermediate brain that connects the new and the old brains. While previous studies have suggested that the dialogue between the old and the new brain during sleep was critical for memory formation, researchers had not investigated the contribution of the entorhinal cortex to this conversation, which turned out to be a game changer, Mehta said. His team found that the entorhinal cortex showed what is called persistent activity, which is thought to mediate working memory during waking life, for example when people pay close attention to remember things temporarily, such as recalling a phone number or following directions.

“The big surprise here is that this kind of persistent activity is happening during sleep, pretty much all the time.” Mehta said. “These results are entirely novel and surprising. In fact, this working memory-like persistent activity occurred in the entorhinal cortex even under anesthesia.”

The study appears Oct. 7, 2012 in the early online edition of the journal Nature Neuroscience.

The findings are important, Mehta said, because humans spend one-third of their lives sleeping and a lack of sleep results in adverse effects on health, including learning and memory problems.

It had been shown previously that the neocortex and the hippocampus “talk” to each other during sleep, and it is believed that this conversation plays a critical role in establishing memories, or memory consolidation. However, no one was able to interpret the conversation.

“When you go to sleep, you can make the room dark and quiet and although there is no sensory input, the brain is still very active,” Mehta said. “We wanted to know why this was happening and what different parts of the brain were saying to each other.”

Mehta and his team developed an extremely sensitive monitoring system that allowed them to follow the activities of neurons from each of three targeted portions of the brain simultaneously, including the activity of a single neuron. This allowed them to decipher the precise communications, even when the neurons were seemingly quiet. They then developed a sophisticated mathematical analysis to decipher the complex conversation.

During sleep, the neocortex goes into a slow wave pattern for about 90 percent of that time. During this period, its activity slowly fluctuates between active and inactive states about once every second. Mehta and his team focused on the entorhinal cortex, which has many parts.

“During sleep the three parts of the brain are talking to each other in a very complex way,” he said. “The entorhinal neurons showed persistent activity, behaving as if they were remembering something even under anesthesia when the mice could not feel or smell or hear anything. Remarkably, this persistent activity sometimes lasted for more than a minute, a huge timescale in brain activity, which generally changes on a scale of one thousandth of a second.”

The findings challenge theories of brain communication during sleep, in which the hippocampus is expected to talk to, or drive, the neocortex. Mehta’s findings instead indicate that there is a third key actor in this complex dialogue, the entorhinal cortex, and that the neocortex is driving the entorhinal cortex, which in turn behaves as if it is remembering something. That, in turn, drives the hippocampus, while other activity patterns shut it down.

“This is a whole new way of thinking about memory consolidation theory. We found there is a new player involved in this process and it’s having an enormous impact,” Mehta said. “And what that third player is doing is being driven by the neocortex, not the hippocampus. This suggests that whatever is happening during sleep is not happening the way we thought it was. There are more players involved so the dialogue is far more complex, and the direction of the communication is the opposite of what was thought.”

Mehta theorizes that this process occurs during sleep as a way to unclutter memories and delete information that was processed during the day but is irrelevant. This results in the important memories becoming more salient and readily accessible. Notably, Alzheimer’s disease starts in the entorhinal cortex and patients have impaired sleep, so Mehta’s findings may have implications in that arena.

For this study, Mehta teamed with Thomas Hahn and Sven Berberich of Heidelberg University in Germany and the Max Planck Institute for Medical Research and James McFarland of Brown University and the UCLA Department of Physics. Going forward, the team will further study this brain activity to uncover the mechanisms behind it and determine if it influences subsequent behavioral performance. These results and related findings can be found here.

“These results provide the first direct evidence for persistent activity in medial entorhinal cortex layer neurons in vivo, and reveal its contribution to cortico-hippocampal interactions, which could be involved in working memory and learning of long behavioral sequences during behavior, and memory consolidation during sleep,” the study states.