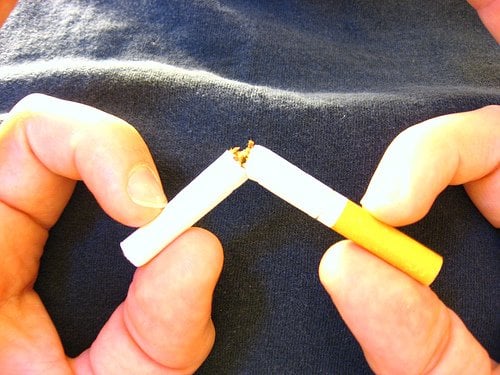 According to the researchers, the data points to neurodevelopmental mechanisms which increase the risk of addiction. It is suggested that better understanding of these mechanisms could lead to new treatment and prevention strategies, which could be extremely beneficial to mentally ill smokers. The image shows a person snapping a cigarette in half. Credited to Qfamily, Flickr.
Home
Featured

People with mental illness smoke at much higher rates than the overall population. But the popular belief that they are self-medicating is most likely wrong, according to researchers at the Indiana University School of Medicine. Instead, they report, research indicates that psychiatric disease makes the brain more susceptible to addiction.

As smoking rates in the general population have fallen below 25 percent, smoking among the mentally ill has remained pervasive, encompassing an estimated half of all cigarettes sold. Despite the well-known health dangers of tobacco consumption, smoking among the mentally ill has long been widely viewed as “self-medication,” reducing the incentive among health care professionals to encourage such patients to quit.

“This is really a devastating problem for people with mental illness because of the broad health consequences of nicotine addiction,” said R. Andrew Chambers, M.D., associate professor of psychiatry at the IU School of Medicine. “Nicotine addiction is the number one cause of premature illness and death in the United States, and most of that morbidity and mortality is concentrated in people with mental illness.”

In a report published recently in the journal Addiction Biology, the research team lead by Dr. Chambers reported the results of experiments using an established animal model of schizophrenia in which rats display a neuropsychiatric syndrome that closely resembles the disease.

Both the schizophrenia-model rats and normal rats were given access to intravenous self-administration of nicotine.

“These results strongly suggest that what has changed in mental illness to cause smoking at such high rates results in a co-morbid addiction to which the mentally ill are highly biologically vulnerable. The evidence suggests that the vulnerability is an involuntary biological result of the way the brain is designed and how it develops after birth, rather than it being about a rational choice to use nicotine as a medicine,” Dr. Chambers said.

The data, he said, point to neuro-developmental mechanisms that increase the risk of addiction. Better understanding of those mechanisms could lead to better prevention and treatment strategies, especially among mentally ill smokers, Dr. Chambers said.

A video interview of Dr. Chambers discussing his research.

Notes about this mental health and smoking research

Additional authors of the research paper were Sarah A. Berg, Alena M. Sentir, Benjamin S. Cooley and Eric A. Engleman of the Laboratory for Translational Neuroscience of Dual Diagnosis and Development, Institute of Psychiatric Research and Training Program in Addiction Psychiatry.

This study was funded by a National Science Foundation GK-12 Doctoral Training Program grant and National Institute of Alcoholism and Alcohol Abuse grants (1RC2 AA019366 and R01 AA020396). Support for enabling open access to the journal article was provided by the Indiana Clinical and Translational Sciences Institute (NIH grant TR000006).