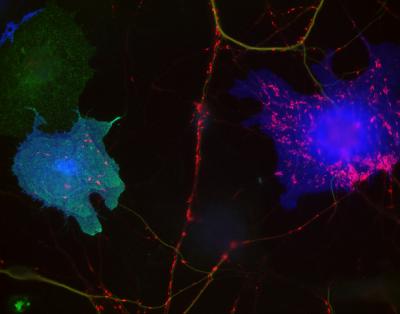 A JCB study reveals that a neuronal protein linked to neurodevelopmental disorders suppresses the development of inhibitory synapses. MDGA1 disrupts the interaction between neuroligin-2 and neurexin-1, two synaptic cell adhesion molecules associated with autism and schizophrenia that promote inhibitory synapse development. In this co-culture assay, a neuron forms multiple presynapses (red) with a COS7 cell (right) expressing neuroligin-2 (blue) but only a few presynapses with a cell (left) coexpressing neuroligin-2 and MDGA1 (green). The image is credited to Pettem, K.L., et al, Journal of Cell Biology.
Home
Autism

Synapse development is promoted by a variety of cell adhesion molecules that connect neurons and organize synaptic proteins. Many of these adhesion molecules are linked to neurodevelopmental disorders; mutations in neuroligin and neurexin family members, for example, are associated with autism and schizophrenia. Pettem et al. reveal that another family of proteins linked to these disorders regulates the function of neuroligins and neurexins in order to suppress the development of inhibitory synapses.

Postsynaptic neuroligin proteins promote synaptogenesis by associating with neurexins on presynaptic membranes. Neuroligin-2, for instance, boosts the development of inhibitory synapses by binding to neurexin family members, and variants in both of these proteins are associated with either autism or schizophrenia. The neuronal proteins MDGA1 and MDGA2 have also been linked to these disorders, but their function in neurodevelopment remains unclear. Both MDGA proteins are localized to the plasma membrane via glycosylphosphatidylinositol anchors, and their extracellular domains contain immunoglobulin-like folds and other motifs that are commonly found in cell adhesion molecules. “Based on that, Research Associate Daisaku Yokomaku thought it might be interesting to study the possible function of MDGAs at synapses,” says Ann Marie Craig from the University of British Columbia in Vancouver, Canada.

Craig and colleagues, led by Yokomaku and Katherine Pettem, investigated the function of MDGAs using co-culture assays, in which postsynaptic proteins like neuroligin-2 are expressed in nonneuronal cells and then tested for their ability to induce presynaptic differentiation in neighboring neurons. “Our first thought was that MDGAs might promote synapse formation,” Craig explains. “But we didn’t find that. Instead, when MDGA1 was coexpressed with neuroligins, it inhibited the ability of neuroligin-2 to promote synapse development.”

Pettem et al. found that MDGA1’s extracellular immunoglobulin-like domains bound to neuroligin-2, blocking its association with neurexin. The same domains were sufficient to inhibit neuroligin-2’s synapse-promoting activity. In contrast, MDGA1 didn’t show high affinity binding to, or inhibit the function of, neuroligin-1, a member of the neuroligin family that promotes the development of excitatory synapses. This suggested that, by inhibiting neuroligin-2, MDGA1 might specifically suppress the development of inhibitory synapses, so Pettem and colleagues investigated MDGA1 function in cultured hippocampal neurons.

“I can’t think of any other proteins that specifically suppress inhibitory synapse formation,” says Craig. Indeed, very few proteins in general have been identified as negative regulators of synapse development, compared to the many proteins that are known to promote synaptogenesis. Pettem et al.’s results suggest that function-altering mutations in the MDGA proteins may disrupt the balance of excitatory and inhibitory synapses in the brain, potentially explaining the development of autism and other neurodevelopmental disorders.

“This puts MDGAs in the same pathway as neurexins and neuroligins and strengthens the evidence for the involvement of synaptic organizing proteins in autism and schizophrenia,” Craig explains. As well as investigating the function of MDGA2, Craig and Yokomaku want to explore the therapeutic potential of MDGA1 inhibitors, not only against autism and schizophrenia, but also for the treatment of epilepsy, in which excitatory and inhibitory synapses are also imbalanced. “If we could develop small molecules or peptides that alter the interaction between MDGA1 and neuroligin-2, it might allow us to control inhibitory synapse development in epilepsy or other conditions,” Craig says.

The research is published in the Journal of Cell Biology.