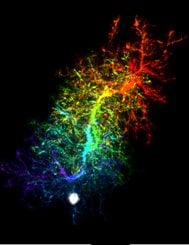 By monitoring the behavior of a class of cells in the brains of living mice, neuroscientists at Johns Hopkins discovered that these cells remain highly dynamic in the adult brain, where they transform into cells that insulate nerve fibers and help form scars that aid in tissue repair.

Published online April 28 in the journal Nature Neuroscience, their work sheds light on how these multipurpose cells communicate with each other to maintain a highly regular, grid-like distribution throughout the brain and spinal cord. The disappearance of one of these so-called progenitor cells causes a neighbor to quickly divide to form a replacement, ensuring that cell loss and cell addition are kept in balance.

“There is a widely held misconception that the adult nervous system is static or fixed, and has a limited capacity for repair and regeneration,” says Dwight Bergles, Ph.D., professor of neuroscience and otolaryngology at the Johns Hopkins University School of Medicine. “But we found that these progenitor cells, called oligodendrocyte precursor cells (OPCs), are remarkably dynamic. Unlike most other adult brain cells, they are able to respond to the repair needs around them while maintaining their numbers.”

OPCs can mature to become oligodendrocytes — support cells in the brain and spinal cord responsible for wrapping nerve fibers to create insulation known as myelin. Without myelin, the electrical signals sent by neurons travel poorly and some cells die due to the lack of metabolic support from oligodendrocytes. It is the death of oligodendrocytes and the subsequent loss of myelin that leads to neurological disability in diseases such as multiple sclerosis.

During brain development, OPCs spread throughout the central nervous system and make large numbers of oligodendrocytes. Scientists know that few new oligodendrocytes are born in the healthy adult brain, yet the brain is flush with OPCs. However, the function of OPCs in the adult brain wasn’t clear.

To find out, Bergles and his team genetically modified mice so that their OPCs contained a fluorescent protein along their edges, giving crisp definition to their many fine branches that extend in every direction. Using special microscopes that allow imaging deep inside the brain, the team watched the activity of individual cells in living mice for over a month.

The researchers discovered that, far from being static, the OPCs were continuously moving through the brain tissue, extending their “tentacles” and repositioning themselves. Even though these progenitors are dynamic, each cell maintains its own area by repelling other OPCs when they come in contact.

“The cells seem to sense each other’s presence and know how to control the number of cells in their population,” says Bergles. “It looks like this process goes wrong in multiple sclerosis lesions, where there are reduced numbers of OPCs, a loss that may impair the cells’ ability to sense whether demyelination has occurred. We don’t yet know what molecules are involved in this process, but it’s something we’re actively working on.”

To see if OPCs do more than form new oligodendrocytes in the adult brain, the team tested their response to injury by using a laser to create a small wound in the brain. Surprisingly, OPCs migrated to the injury site and contributed to scar formation, a previously unsuspected role. The empty space in the OPC grid, created by the loss of the scar-forming OPCs, was then filled by cell division of neighboring OPCs, providing an explanation for why brain injury is often accompanied by proliferation of these cells.

“Scar cells are not oligodendrocytes, so the term ‘oligodendrocyte precursor cell’ may now be outdated,” says Bergles. “These cells are likely to have a broader role in tissue regeneration and repair than we thought. Because traumatic brain injuries, multiple sclerosis and other neurodegenerative diseases require tissue regeneration, we are eager to learn more about the functions of these enigmatic cells.”

Notes about this neuroplasticity research

Other authors of the report include Ethan Hughes, Shin Kang and Masahiro Fukaya of the Johns Hopkins University School of Medicine.

This work was supported by grants from the National Institute of Neurological Disorders and Stroke (F32NS076098, NS051509, NS050274) and the Brain Science Institute at The Johns Hopkins University.