Summary: UCSF researchers report maternal stress could impact the development of a child’s parasympathetic nervous system, both in utero and after birth. Additionally, children whose mothers were stressed during pregnancy smile less, are less engaged and have a diminished ability to regulate emotions.

Maternal stress during the second trimester of pregnancy may influence the nervous system of the developing child, both before and after birth, and may have subtle effects on temperament, resulting in less smiling and engagement, as well as diminished ability to regulate emotions.

In a study led by UC San Francisco, researchers looked at the stress levels of 151 low-to-middle-income women who were between 12 and 24 weeks pregnant. The study was published in the journal Development and Psychopathology on Nov. 22, 2017.

The researchers followed the women throughout pregnancy and after delivery, and conducted a test to compare their reported stress levels during pregnancy with objective levels of stress in their 6-month-old offspring. In the test, the infants’ cardiac function was monitored while the mothers were instructed to look at the infant’s face but not interact with or touch them for two minutes following a brief play session.

High reactivity, which is assessed by measuring the variability in the heart rate in conjunction with breathing, is indicative of a stronger decrease in parasympathetic nervous system activity in response to challenge, said first author Nicole Bush, PhD, of the UCSF departments of Psychiatry and Pediatrics, and UCSF Weill Institute for Neurosciences. The parasympathetic nervous system enables the body to rest and digest food, by slowing the heart rate and increasing intestinal and glandular activity.

“This isn’t automatically good or bad, but we know that being highly reactive places children at risk for a range of psychopathological problems, particularly anxiety and depression, as well as externalizing problems, such as disruptive behavior, especially if they experience adverse family and school environments.”

However, in an optimal environment with few adversities, children with higher stress reactivity “don’t have their stress response triggered too often and may exhibit better-than-average social skills and emotional and behavioral well-being, because greater reactivity can make them more sensitive to the benefits of positive relationships and experiences in their environments,” said Bush, who is also associate director of research at the UCSF Division of Developmental Medicine.

Additionally, questionnaires from the 151 mothers revealed that those in the top third, who had higher levels of perceived stress in pregnancy and post-delivery, had babies with temperamental “surgency” levels that were 8 percent lower than those babies of mothers in the lower third, who reported less perceived stress in pregnancy and post-delivery.

Surgency includes traits such as willingness to approach and engage with the outside world, as well as laughter and smiles. These same babies born to the highly-stressed mothers were also found to have 8 percent lower levels of self-regulation, the ability to manage emotions – such as soothing themselves in periods of high stress – compared with the babies of mothers with less perceived stress during pregnancy and post-delivery.

This combination of lower surgency and lower self-regulation can place individuals at added risk for depression, anxiety and difficulties with their social relationships, said Bush.

Funding: The study was supported by funding from the National Institutes of Health, the Robert Wood Johnson Health and Society Scholars Program, and the Lisa and John Pritzker Family Foundation.

Effects of pre- and postnatal maternal stress on infant temperament and autonomic nervous system reactivity and regulation in a diverse, low-income population 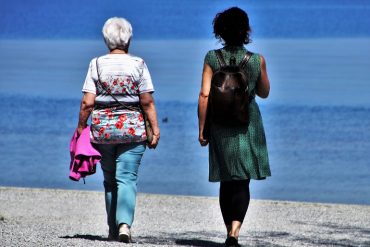