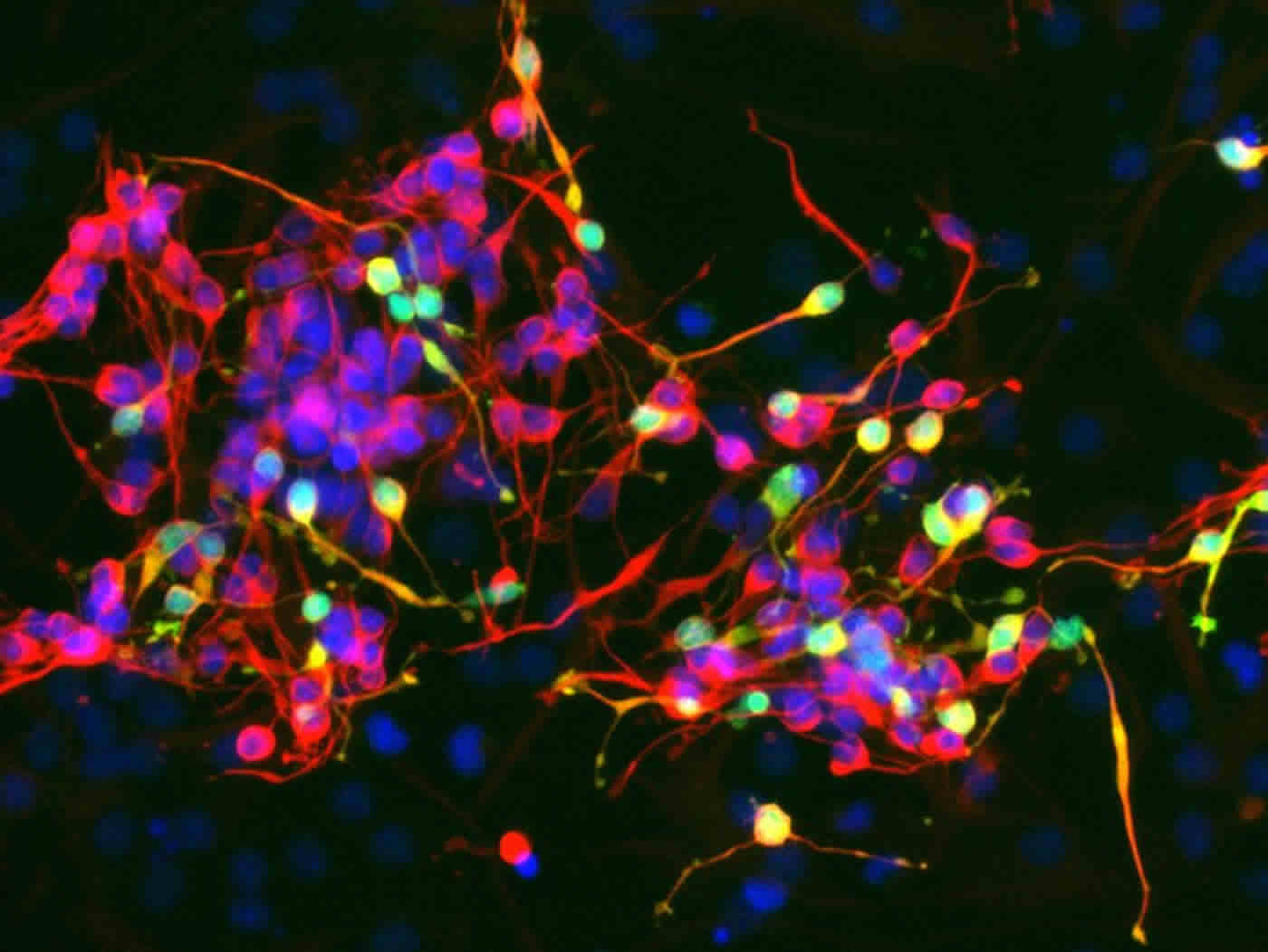 In this cluster of neurons, the greens cells have been infected with a virus to reduce levels of the RNA molecule called Pnky, resulting in increased production of neurons. Someday this finding could be important for regenerative medicine and cancer treatment. Image adapted from the UCSF press release.

Pnky, a noncoding RNA found in brain stem cells, may have a broad range of clinical applications.

A research team at UC San Francisco has discovered an RNA molecule called Pnky that can be manipulated to increase the production of neurons from neural stem cells.

The research, led by neurosurgeon Daniel A. Lim, MD, PhD, and published on March 19, 2015 in Cell Stem Cell, has possible applications in regenerative medicine, including treatments of such disorders as Alzheimer’s disease, Parkinson’s disease and traumatic brain injury, and in cancer treatment.

Pnky is one of a number of newly discovered long noncoding RNAs (lncRNAs), which are stretches of 200 or more nucleotides in the human genome that do not code for proteins, yet seem to have a biological function.

The name, pronounced “Pinky,” was inspired by the popular American cartoon series Pinky and the Brain. “Pnky is encoded near a gene called ‘Brain,’ so it sort of suggested itself to the students in my laboratory,” said Lim. Pnky also appears only to be found in the brain, he noted.

Co-first authors Alex Ramos, PhD, and Rebecca Andersen, who are students in Lim’s laboratory, first studied Pnky in neural stem cells found in mouse brains, and also identified the molecule in neural stem cells of the developing human brain. They found that when Pnky was removed from stem cells in a process called knockdown, neuron production increased three to four times.

“It is remarkable that when you take Pnky away, the stem cells produce many more neurons,” said Lim, an assistant professor of neurological surgery and director of restorative surgery at UCSF. “These findings suggest that Pnky, and perhaps lncRNAs in general, could eventually have important applications in regenerative medicine and cancer treatment.”

Lim observed that Pnky has an intriguing possible connection with brain tumors.

Using an analytical technique called mass spectrometry, Ramos found that Pnky binds the protein PTBP1, which is also found in brain tumors and is known to be a driver of brain tumor growth. In neural stem cells, Pnky and PTBP1 appear to function together to suppress the production of neurons. “Take away one or the other and the stem cells differentiate, making more neurons,” said Lim. “It is also possible that Pnky can regulate brain tumor growth, which means we may have identified a target for the treatment of brain tumors.”

Lim said that the larger significance of the research is that it adds to a growing store of knowledge about lncRNAs, previously unknown sections of the genome that some biologists have referred to as the “dark matter” of the human genome.

“Recently, over fifty thousand human lncRNAs have been discovered. Thus, there may be more human lncRNAs than there are genes that code for proteins,” said Lim. “It is possible that not all lncRNAs have important biological functions, but we are making a start toward learning which ones do, and if so, how they function. It’s a new world of experimental biology, and the students in my lab are right there on the frontier.”

Lim had particular praise for Ramos, an MD-PhD student in the UCSF Medical Scientist Training Program, and Andersen, who has a fellowship from the prestigious National Science Foundation (NSF) Graduate Research Fellowship Program. “They have been a great collaborative team and an inspiration to others in my lab,” said Lim. “I think they represent the pioneering, investigative spirit of the UCSF student body.”

The study was supported by funds from the National Institutes of Health, U.S. Department of Veterans Affairs, NSF, UCSF, San Francisco State University and the Howard Hughes Medical Institute.