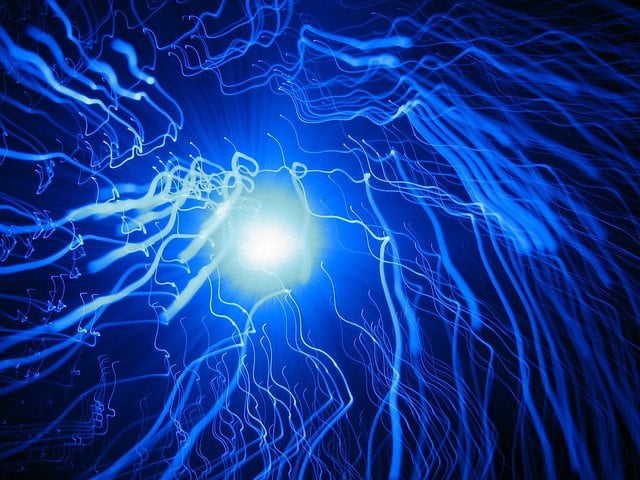 To make the proteins respond to light, the researchers harnessed Cmn, a photo-responsive amino acid. When a pulse of light shines on Cmn, it's bulky side chain breaks off, leaving cysteine, a smaller amino acid. This image was shared by the Flickr user JaredZammit. Look to notes below for more photo info.
Home
Featured

New technique can rapidly turn genes on and off, helping scientists better understand their function.

Although human cells have an estimated 20,000 genes, only a fraction of those are turned on at any given time, depending on the cell’s needs — which can change by the minute or hour. To find out what those genes are doing, researchers need tools that can manipulate their status on similarly short timescales.

That is now possible, thanks to a new technology developed at MIT and the Broad Institute that can rapidly start or halt the expression of any gene of interest simply by shining light on the cells.

The work is based on a technique known as optogenetics, which uses proteins that change their function in response to light. In this case, the researchers adapted the light-sensitive proteins to either stimulate or suppress the expression of a specific target gene almost immediately after the light comes on.

“Cells have very dynamic gene expression happening on a fairly short timescale, but so far the methods that are used to perturb gene expression don’t even get close to those dynamics. To understand the functional impact of those gene-expression changes better, we have to be able to match the naturally occurring dynamics as closely as possible,” says Silvana Konermann, an MIT graduate student in brain and cognitive sciences.

The ability to precisely control the timing and duration of gene expression should make it much easier to figure out the roles of particular genes, especially those involved in learning and memory. The new system can also be used to study epigenetic modifications — chemical alterations of the proteins that surround DNA — which are also believed to play an important role in learning and memory.

Konermann and Mark Brigham, a graduate student at Harvard University, are the lead authors of a paper describing the technique in the July 22 online edition of Nature. The paper’s senior author is Feng Zhang, the W.M. Keck Assistant Professor in Biomedical Engineering at MIT and a core member of the Broad Institute and MIT’s McGovern Institute for Brain Research.

The new system consists of several components that interact with each other to control the copying of DNA into messenger RNA (mRNA), which carries genetic instructions to the rest of the cell. The first is a DNA-binding protein known as a transcription activator-like effector (TALE). TALEs are modular proteins that can be strung together in a customized way to bind any DNA sequence.

Fused to the TALE protein is a light-sensitive protein called CRY2 that is naturally found in Arabidopsis thaliana, a small flowering plant. When light hits CRY2, it changes shape and binds to its natural partner protein, known as CIB1. To take advantage of this, the researchers engineered a form of CIB1 that is fused to another protein that can either activate or suppress gene copying.

After the genes for these components are delivered to a cell, the TALE protein finds its target DNA and wraps around it. When light shines on the cells, the CRY2 protein binds to CIB1, which is floating in the cell. CIB1 brings along a gene activator, which initiates transcription, or the copying of DNA into mRNA. Alternatively, CIB1 could carry a repressor, which shuts off the process.

A single pulse of light is enough to stimulate the protein binding and initiate DNA copying. The researchers found that pulses of light delivered every minute or so are the most effective way to achieve continuous transcription for the desired period of time. Within 30 minutes of light delivery, the researchers detected an uptick in the amount of mRNA being produced from the target gene. Once the pulses stop, the mRNA starts to degrade within about 30 minutes.

In this study, the researchers tried targeting nearly 30 different genes, both in neurons grown in the lab and in living animals. Depending on the gene targeted and how much it is normally expressed, the researchers were able to boost transcription by a factor of two to 200.

Karl Deisseroth, a professor of bioengineering at Stanford University and one of the inventors of optogenetics, says the most important innovation of the technique is that it allows control of genes that naturally occur in the cell, as opposed to engineered genes delivered by scientists.

“You could control, at precise times, a particular genetic locus and see how everything responds to that, with high temporal precision,” says Deisseroth, who was not part of the research team.

Another important element of gene-expression control is epigenetic modification. One major class of epigenetic effectors is chemical modification of the proteins, known as histones, that anchor chromosomal DNA and control access to the underlying genes. The researchers showed that they can also alter these epigenetic modifications by fusing TALE proteins with histone modifiers.

Epigenetic modifications are thought to play a key role in learning and forming memories, but this has not been very well explored because there are no good ways to disrupt the modifications, short of blocking histone modification of the entire genome. The new technique offers a much more precise way to interfere with modifications of individual genes.

“We want to allow people to prove the causal role of specific epigenetic modifications in the genome,” Zhang says.

So far, the researchers have demonstrated that some of the histone effector domains can be tethered to light-sensitive proteins; they are now trying to expand the types of histone modifiers they can incorporate into the system.

“It would be really useful to expand the number of epigenetic marks that we can control. At the moment we have a successful set of histone modifications, but there are a good deal more of them that we and others are going to want to be able to use this technology for,” Brigham says.

Notes about this optogenetics and epigenetic research