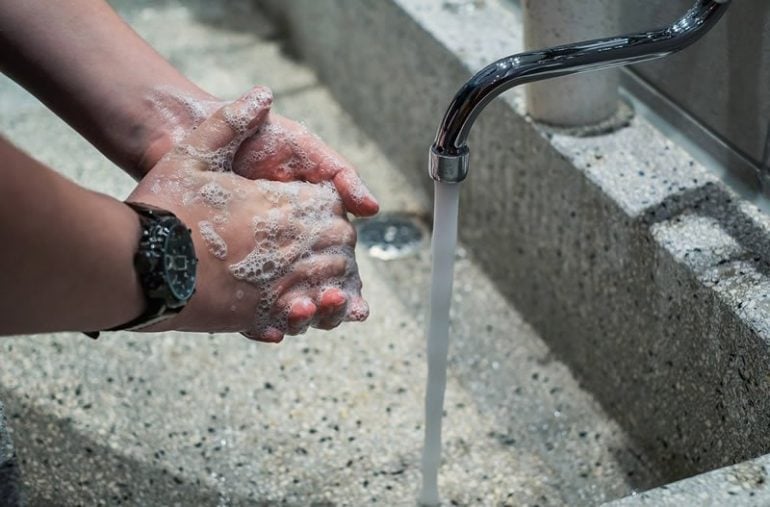 The findings have led the researchers to file a patent application for the antibody and they are now working with a drug company to develop a potential treatment for human patients. The image is in the public domain.

Summary: People with OCD have six times higher Immuno-moodulin (Imood) expression that those without the disorder. Blocking Imood with the aid of an antibody reduced OCD-like behaviors in mouse models within a couple of days following treatment.

Scientists at Queen Mary University of London and the University of Roehampton, London, have discovered that patients suffering from obsessive-compulsive disorder (OCD) have increased levels of a protein called Immuno-moodulin (Imood) in their lymphocytes, a type of immune cell.

Mice with high levels of this protein were also found to exhibit behaviours that are characteristic of anxiety and stress, such as digging and excessive grooming.

When the researchers treated the mice with an antibody that neutralised Imood, the animals’ anxiety levels reduced.

The findings have led the researchers to file a patent application for the antibody and they are now working with a drug company to develop a potential treatment for human patients.

“There is mounting evidence that the immune system plays an important role in mental disorders,” said Professor Fulvio D’Acquisto, a professor of immunology at the University of Roehampton and honorary professor of Immunopharmacology at Queen Mary University of London, who led the research. “And in fact people with auto-immune diseases are known to have higher than average rates of mental health disorders such as anxiety, depression and OCD. Our findings overturn a lot of the conventional thinking about mental health disorders being solely caused by the central nervous system.”

Professor D’Acquisto, whose findings are published in the journal Brain Behavior and Immunity, first identified Imood by chance while studying a different protein called Annexin-A1 and the role it plays in autoimmune diseases such as multiple sclerosis and lupus.

He had created transgenic mice to over-express this protein in their T-cells, one of the main cells responsible for the development of autoimmune diseases, but found the mice showed more anxiety than normal. When he and his team analysed the genes expressed in the animals’ T-cells, they discovered one gene in particular was especially active. The protein produced from this gene was what they eventually named Immuno-moodulin, or Imood.

When the anxious mice were given an antibody that blocked Imood, their behaviour returned to normal in a couple of days.

The researchers tested the immune cells from 23 patients with OCD and 20 healthy volunteers. They found Imood expression was around six times higher in the OCD patients.

Other recent research by scientists elsewhere have also found the same protein may also play a role in Attention-Deficit/Hyperactivity Disorder.

Professor D’Acquisto believes Imood does not directly regulate brain functions in a classical way, for example by changing the levels of chemical signals in neurons. Instead, it may influence genes in brain cells that have been linked to mental disorders like OCD.

“This is work we still have to do to understand the role of Imood,” he said. “We also want to do more work with larger samples of patients to see if we can replicate what we saw in the small number we looked at in our study.”

In the meantime, Professor D’Acquisto and Dr Dianne Cooper, a Senior Lecturer at Queen Mary University of London, are working with the biopharmaceutical company UCB to develop antibodies against Imood that can be used in humans and to understand how this could be used to treat patients with mental disorders.

“It is early still, but the discovery of antibodies – instead of the classical chemical drugs – for the treatment of mental disorders could radically change the life of these patients as we foresee a reduced chance of side effects,” he said. Professor D’Acquisto estimates it could take up to five years before a treatment can be taken to clinical trials.

Patients suffering from autoimmune diseases are more susceptible to mental disorders yet, the existence of specific cellular and molecular mechanisms behind the co-morbidity of these pathologies is far from being fully elucidated. By generating transgenic mice overexpressing Annexin-A1 exclusively in T cells to study its impact in models of autoimmune diseases, we made the unpredicted observation of an increased level of anxiety. Gene microarray of Annexin-A1 CD4+ T cells identified a novel anxiogenic factor, a small protein of approximately 21 kDa encoded by the gene 2610019F03Rik which we named Immuno-moodulin. Neutralizing antibodies against Immuno-moodulin reverted the behavioral phenotype of Annexin-A1 transgenic mice and lowered the basal levels of anxiety in wild type mice; moreover, we also found that patients suffering from obsessive compulsive disorders show high levels of Imood in their peripheral mononuclear cells. We thus identify this protein as a novel peripheral determinant that modulates anxiety behavior. Therapies targeting Immuno-moodulin may lead to a new type of treatment for mental disorders through regulation of the functions of the immune system, rather than directly acting on the nervous system.