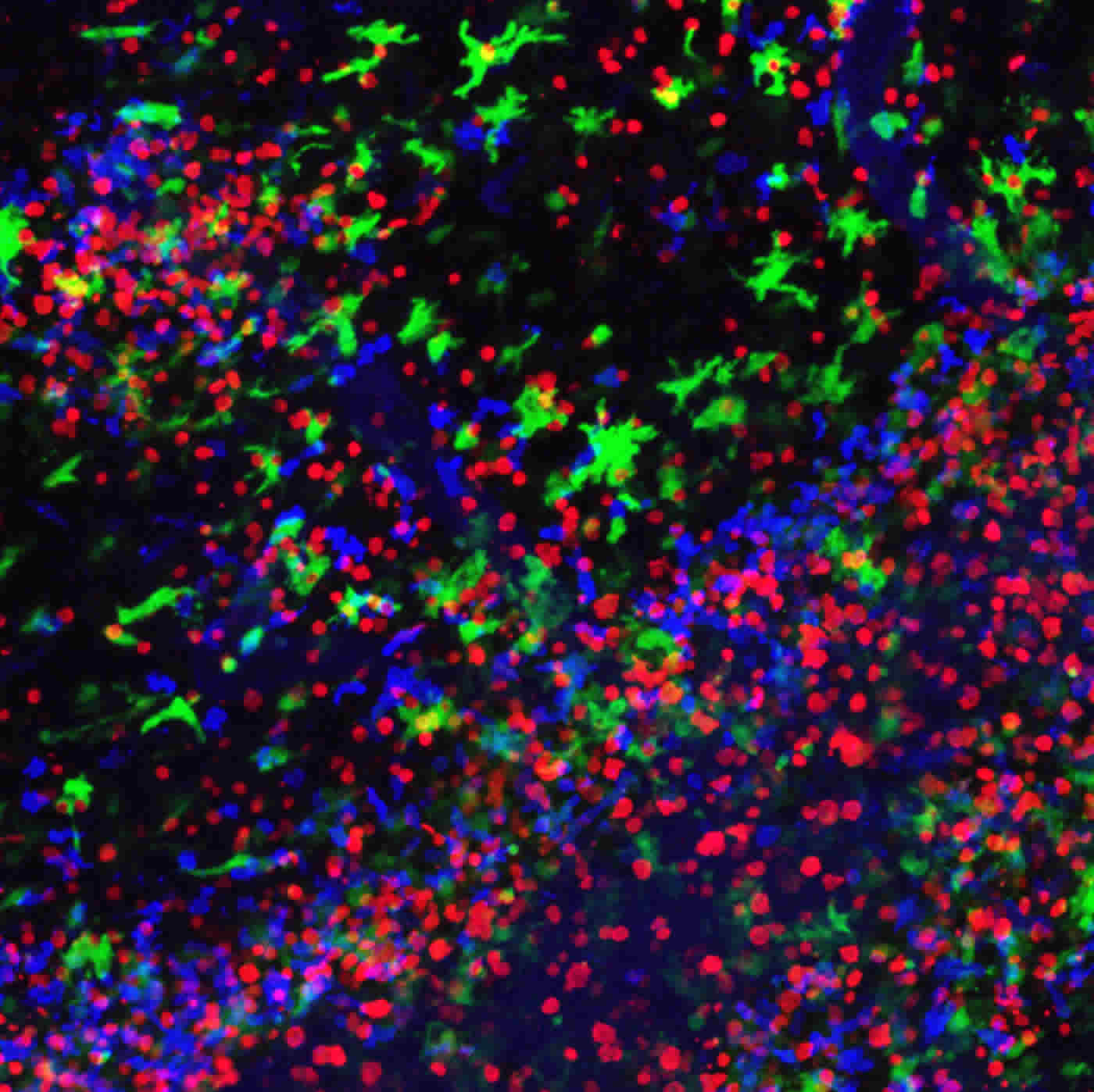 The Innate Immune System Modulates the Severity of Multiple Sclerosis

Multiple sclerosis, a debilitating neurological disease, is triggered by self-reactive T cells that successfully infiltrate the brain and spinal cord where they launch an aggressive autoimmune attack against myelin, the fatty substance that surrounds and insulates nerve fibers. Over time, the resulting bouts of inflammation permanently damage the myelin sheath and the nerve fibers it protects, disrupting nerve signals traveling to and from the brain.

But the molecular cues that enable autoimmune T cells, which are usually kept at bay by the blood-brain barrier, to slip into the central nervous system had remained unclear. In their latest study, published in the Nov. 2, 2015, advance online issue of Nature Immunology, researchers at the La Jolla Institute for Allergy and Immunology report that these disease-causing autoimmune T cells are lured into the nervous system by monocytes and macrophages, a subset of immune cells better known as the immune system’s cleanup crew.

“Our results show that macrophages and monocytes actively participate in the initiation and progression of multiple sclerosis, which has long been considered a primarily T cell driven disease,” says the study’s senior author Catherine Hedrick, Ph. D., a professor in the Division of Inflammation Biology. “They exacerbate the severity of the disease by sending out chemical signals that boost inflammation and attract autoimmune T cells to the central nervous system.”

By revealing the molecular mechanisms that control neuroinflammation, these findings add a new layer of complexity to our understanding of multiple sclerosis and support the growing appreciation of the significance of the crosstalk between the peripheral immune system and the brain. They also open up new avenues for potential multiple sclerosis therapies via manipulating the levels of immune regulators that contribute to inflammation in the central nervous system.

“Multiple sclerosis affects millions of people worldwide,” says the study’s lead author, Iftach Shaked, Ph.D., a postdoctoral researcher in the laboratory of LJI professor Klaus Ley, Ph.D. “But what’s really puzzling is that we all have autoimmune T cells that recognize myelin basic protein but normally they do not infiltrate the central nervous system and cause disease. ”

Stress can worsen symptoms of inflammatory diseases such as multiple sclerosis but the molecular mechanisms linking cellular stress signaling and neuroinflammation had remained unclear.

A chance hallway encounter between Shaked and co-first author Richard Hanna, Ph.D., an immunologist in Hedrick’s laboratory, sparked a collaboration that provided a starting point to track the elusive link.

Hanna studies a protein known as Nr4a1, which responds to both inflammatory and stress signals and the researchers hypothesized that it may be a key factor in the prevention of autoimmunity affecting the central nervous system.

To address the importance of Nr4a1 in brain autoimmunity, the researchers induced experimental autoimmune encephalomyelitis (EAE), a model of multiple sclerosis, in mice with and without Nr4a1. In the absence of Nr4a1, auto-reactive T cells infiltrated the central nervous system much earlier and in greater numbers exacerbating the progression and severity of the disease when compared to the control group.

When Shaked and Hanna dug deeper, they discovered that Nr4a1 represses the production of norepinephrine, a major mediator of the body’s response to physiological and psychological stressors. Without Nr4a1 to put a damper on production, monocytes and macrophages increase secretion of norepinephrine, which in turn leads to the activation of macrophages, thereby amplifying neuroinflammation and causing a massive influx of T cells into the central nervous system.

“Myeloid cells including macrophages have receptors for stress signaling molecules, which allows them to respond to cues from the sympathetic nervous system,” explains Hanna. “But is seems they not only listen to the nervous system but that they can also send their own signals.”

A small pilot study indicated that the same communications channels might be used to send messages between the brain and the peripheral immune system in patients with multiple sclerosis. “Monocytes and macrophages have a way to amplify inflammation in the central nervous system,” says Shaked, “which really shows that myeloid cells play an unexpected and important role in diseases of the brain.”

About this Neurology research

Funding: The work was supported by the La Jolla Institute for Allergy and Immunology, the American Heart Association, the LJI Board of Directors Fellowship, the Fondation Leducq, the Sigrid Juselius Foundation, the Academy of Finland, the Pacific Northwest Udall Center and the National Institutes of Health (R01 DK091183-21 and R01 HL118765.)

The molecular mechanisms that link the sympathetic stress response and inflammation remain obscure. Here we found that the transcription factor Nr4a1 regulated the production of norepinephrine (NE) in macrophages and thereby limited experimental autoimmune encephalomyelitis (EAE), a mouse model of multiple sclerosis. Lack of Nr4a1 in myeloid cells led to enhanced NE production, accelerated infiltration of leukocytes into the central nervous system (CNS) and disease exacerbation in vivo. In contrast, myeloid-specific deletion of tyrosine hydroxylase (TH), the rate-limiting enzyme in catecholamine biosynthesis, protected mice against EAE. Furthermore, we found that Nr4a1 repressed autocrine NE production in macrophages by recruiting the corepressor CoREST to the Th promoter. Our data reveal a new role for macrophages in neuroinflammation and identify Nr4a1 as a key regulator of catecholamine production by macrophages.