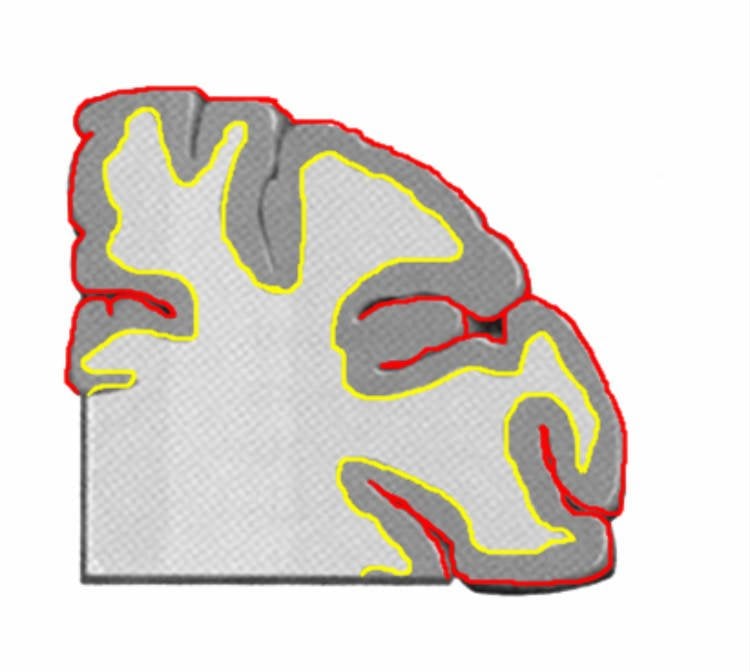 For the first time, scientists at King’s College London have identified a gene linking the thickness of the grey matter in the brain to intelligence. The study is published today in Molecular Psychiatry and may help scientists understand biological mechanisms behind some forms of intellectual impairment.

The researchers looked at the cerebral cortex, the outermost layer of the human brain. It is known as ‘grey matter’ and plays a key role in memory, attention, perceptual awareness, thought, language and consciousness. Previous studies have shown that the thickness of the cerebral cortex, or ‘cortical thickness’, closely correlates with intellectual ability, however no genes had yet been identified.

An international team of scientists, led by King’s, analysed DNA samples and MRI scans from 1,583 healthy 14 year old teenagers, part of the IMAGEN cohort. The teenagers also underwent a series of tests to determine their verbal and non-verbal intelligence.

Dr Sylvane Desrivières, from the MRC Social, Genetic and Developmental Psychiatry Centre at King’s College London’s Institute of Psychiatry and lead author of the study, said: “We wanted to find out how structural differences in the brain relate to differences in intellectual ability. The genetic variation we identified is linked to synaptic plasticity – how neurons communicate. This may help us understand what happens at a neuronal level in certain forms of intellectual impairments, where the ability of the neurons to communicate effectively is somehow compromised.”

She adds: “It’s important to point out that intelligence is influenced by many genetic and environmental factors. The gene we identified only explains a tiny proportion of the differences in intellectual ability, so it’s by no means a ‘gene for intelligence’.”

The researchers looked at over 54,000 genetic variants possibly involved in brain development. They found that, on average, teenagers carrying a particular gene variant had a thinner cortex in the left cerebral hemisphere, particularly in the frontal and temporal lobes, and performed less well on tests for intellectual ability. The genetic variation affects the expression of the NPTN gene, which encodes a protein acting at neuronal synapses and therefore affects how brain cells communicate.

The genetic variation identified in this study only accounts for an estimated 0.5% of the total variation in intelligence. However, the findings may have important implications for the understanding of biological mechanisms underlying several psychiatric disorders, such as schizophrenia, autism, where impaired cognitive ability is a key feature of the disorder.

Notes about this neurogenetics and neuroimaging research

IMAGEN is a major European-Commission funded project on risk taking and reinforcement-related behaviours in teenagers. The project involves 2,000 14 year old children and research teams from England, France, Ireland and Germany. The project aims to identify and learn more about biological and environmental factors that might have an influence on normal brain function and mental health in teenagers. This knowledge will then help develop better prevention strategies and therapies in the future.