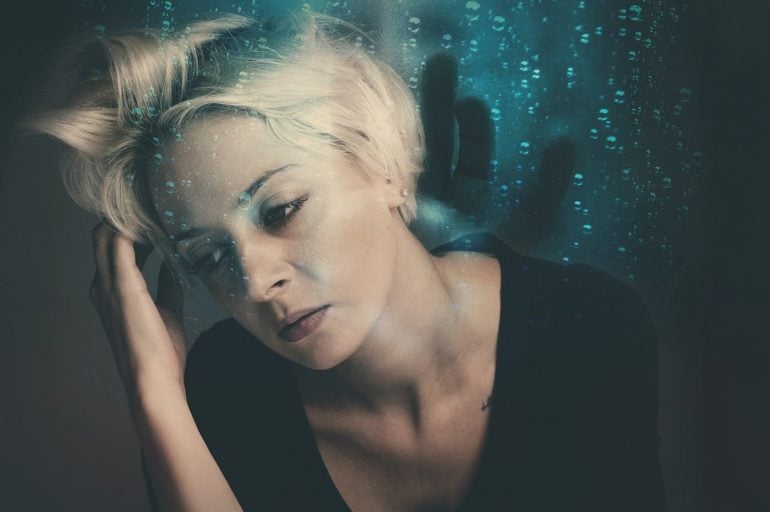 The research is the first to show that having difficulty getting to sleep, along with thinking about the trauma or other negative events prior to sleep, could boost the odds of a post-trauma nightmare occurrence. Image is in the public domain.

Summary: Having difficulty getting to sleep, in addition to ruminating about trauma experiences and other negative events before sleep, boosts the odds of sexual trauma survivors experiencing post-trauma nightmares.

It’s been estimated that up to 88% of survivors of rape or molestation suffer from persistent nightmares that can occur multiple times per week, seemingly at random.

A new study from psychologists at the University of Kansas just published in the Journal of Traumatic Stress attempts to shed light on triggers of post-trauma nightmare occurrences – a topic that has received scant study.

The research is the first to show that having difficulty getting to sleep, along with thinking about the trauma or other negative events prior to sleep, could boost the odds of a post-trauma nightmare occurrence.

“We found both ‘sleep latency,’ or the time it takes someone to fall asleep, and ‘pre-sleep cognitive arousal,’ or worrying or ruminating prior to going to bed, were the two significant predictors of a nightmare occurring,” said lead author Westley Youngren, a doctoral student in clinical psychology at KU.

In the study, Youngren and co-authors Nancy Hamilton, KU associate professor of clinical psychology, and Kristopher Preacher of Vanderbilt University, recruited 27 female college students who reported frequent nightmares tied to sexual trauma. In addition to interviews and questionnaires to assess general depression and anxiety-related symptoms, these participants were asked to complete pre- and post-sleep diaries for six days.

“If someone took 60 or 90 minutes to fall asleep and during that time they were worrying or thinking about the trauma, they were then most likely to have a nightmare,” Youngren said. “It tended to be the interaction of the two that predicted the occurrence of a nightmare. It’s really priming the mind to have dream content of the trauma, which is then going to result in a nightmare.”

Youngren said he hoped the findings could be used in a clinical setting to help survivors of sexual trauma reduce or avoid nightmares.

“Recurrent nightmares are pretty frequent in trauma survivors, and they’re distressing – often manifesting as nightmares of the exact same event that happened,” he said. “If an individual is raped, they can have nightmares of being assaulted again, much the way people who have been in combat have nightmares of combat again.”

Currently, interventions include prescribing a heart rate medication called Prazosin and a therapeutic technique where a survivor “re-scripts” nightmares to prime themselves into dreaming differently. Youngren said a more specific grasp of what triggers nightmare occurrences could lead to more effective treatments.

“Re-scripting based therapy does have more effects than using the Prazosin, but it’s still not as high as other kinds of treatment options for other psychological disorders,” Youngren said.

Youngren’s research interest in traumatic nightmares stems from his time as a U.S. Marine.

“While in the military, I was kind of like, ‘All right, well, I want to get a job where I can sleep all the time.’ Because I wasn’t sleeping at all in the military. So, I wanted to do sleep research. I did my undergraduate education at the University of Tulsa with a creator of one of the nightmare treatments. I started working with her and getting involved in trauma work — and really saw nightmares were the perfect combination of sleep research and trauma work. So, I really fell into that and sought out a graduate experience where I could investigate these post-traumatic nightmares, which brought me to KU.”

Youngren plans to earn his doctorate by 2022 and hopes to make a career out of research into post-traumatic nightmares.

Bilingualism does not make you ‘smarter’

“Currently, we just got a research grant from American Psychological Association’s Division 19 — their military psychology unit — in order to continue the kind of study we’ve just published,” he said. “We’re going to make it bigger and use physiological monitors as the second step.”