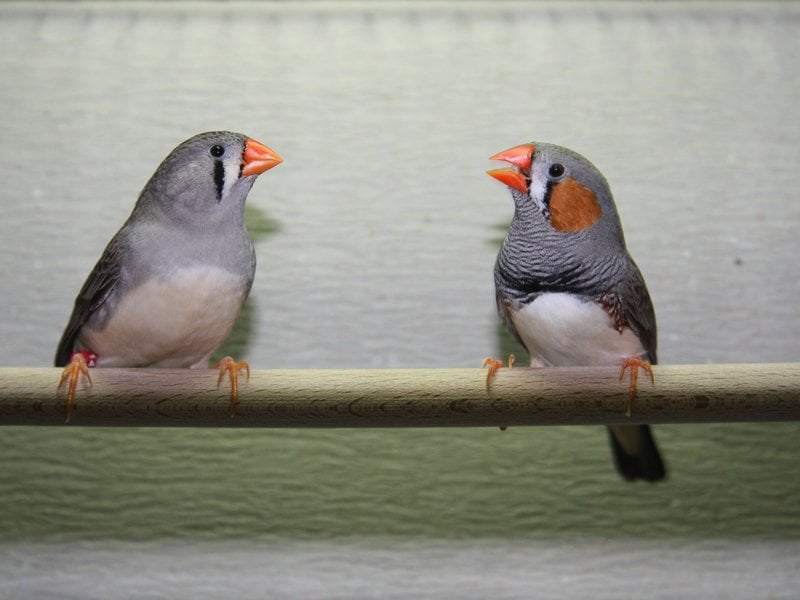 Using partial cross-fostering, where half of the hatchlings were raised by their genetic parents and the other half by foster parents, researchers were able to tease apart the involvement of genotype, rearing environment and nutritional effects to variations in song behavior and brain structure. Credited to Stefan Leitner, Max Planck Institute for Ornithology.
Home
Featured

The song of songbirds is a learned, complex behavior and subject to strong selective forces. However, it is difficult to tease apart the influence of the genetic background and the environment on the expression of individual variation in song.

Scientists from the Max Planck Institute for Ornithology in Seewiesen in collaboration with international researchers now compared song and brain structure of parents and offspring in zebra finches that have been raised either with their genetic or foster parents. They also varied the amount of food during breeding. Remarkably, both song and the underlying brain structure had a low heritability and were strongly influenced by environmental factors.

A central topic in behavioral biology is the question, which aspects of a behavior are learned or expressed due to genetic predisposition. Today it is known that our personality and behavior are far less determined by the genetic background. Especially during development environmental factors can shape brain and behavior via so-called epigenetic effects. Thereby hormones play an important role. A shift in hormone concentrations in early life can have long lasting effects for an organism, whereas the same change in adults often may show only short-term changes. However, whether the influence of the environment has either strong or weak effects can largely depend on the individual genetic predisposition. However, it is relatively hard to discriminate the effects of the environment from that of the genes.

An attempt to tease apart these effects has been conducted by researchers from the Max Planck Institute for Ornithology in collaboration with an international team of scientists in zebra finch breeding pairs. Using partial cross-fostering the researchers exchanged half of the eggs within a nest making them to “cuckoo’s eggs”. Therefore half of the hatchlings were raised by their genetic parents, whereas the other half was raised by their foster parents. In addition they modified the availability of food by mixing the seeds with husks so that the parents had to spend more time searching for food. When the male offspring were adult at 100 days the researchers recorded their songs and analyzed the underlying neuroanatomy. This partial cross-fostering design enabled the researchers to tease apart the involvement of genotype, the rearing environment and nutritional effects to variation in song behavior and brain structure.

The results showed that heritability values were low for most song characteristics, except the number of song syllables and maximum frequency. On the other hand the common rearing environment including the song of the foster father mainly predicted the proportion of unique syllables in the songs of the sons, moreover this relationship was dependent on food availability. Even more striking results were found when the researchers investigated the brain anatomy. Heritability of brain variables was very low and strongly controlled by the environment. For example, an emergence of a clear relationship between brain mass and genotype is prevented by varying environmental quality.

This result was quite surprising as previous studies have found a high heritability of the song control system in the songbird brain, however these studies did not account for variation of the rearing environment. ”Being highly flexible in response to environmental conditions can maintain genetic variation and influences song learning and brain development” says Stefan Leitner, senior author of the study.