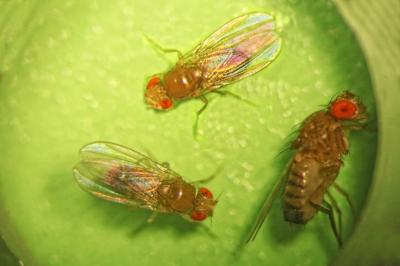 When sNPF was activated, the Drosophila fell asleep almost immediately. They woke only long enough to eat before falling asleep once again. The activation of sNPF caused the Drosophila to become so sleepy that, once they found the food source, they sleep on it for days at a time. The image shows Drosophila flies. Credited to Mike Lovett.
Home
Featured

Why does hunger keep us awake and a full belly make us tired? Why do people with sleep disorders such as insomnia often binge eat late at night? What can sleep patterns tell us about obesity?

Sleep, hunger and metabolism are closely related, but scientists are still struggling to understand how they interact. Now, Brandeis University researchers have discovered a function in a molecule in fruit flies that may provide insight into the complicated relationship between sleep and food.

In the October issue of the journal Neuron, Brandeis scientists report that sNPF, a neuropeptide long known to regulate food intake and metabolism, is also an important component in regulating and promoting sleep. When researchers activated sNPF in fruit flies, the insects fell asleep almost immediately, awaking only long enough to eat before nodding off again. The flies were so sleepy that once they found a food source, they slept right on top of it for days — like falling asleep on a giant hamburger bun and waking up long enough to take a few nibbles before falling back to sleep.

When researchers returned sNPF functions to normal, the flies resumed their normal level of activity, leaving behind their couch potato ways.

The researchers, led by professor of biology Leslie Griffith, concluded that sNPF has an important regulatory function in sleep in addition to its previously known function coordinating behaviors such as eating and metabolism.

“This paper provides a nice bridge between feeding behavior and sleep behavior with just a single molecule,” says Nathan Donelson, a post doctoral fellow in Griffith’s lab and one of the study’s lead authors.

Neurons use neuropeptides to communicate a range of brain functions including learning, metabolism, memory and social behaviors. In humans, Neuropeptide Y functions similarly to sNPF and has been studied as a possible drug target for obesity treatment.

But scientists don’t fully understand how regulating neuropeptide function at specific times and in specific cells affects sleeping and eating. By studying sNPF in fruit flies, scientists can learn which cells, neurotransmitters and genes are involved in eating and sleeping; what processes turn on and inhibit the behaviors, and how sleep cells are relevant to hunger drive.

“Our paper makes a significant step into tying all these things together,” says Donelson, “and that is extremely important down the road to our understanding of human health.”