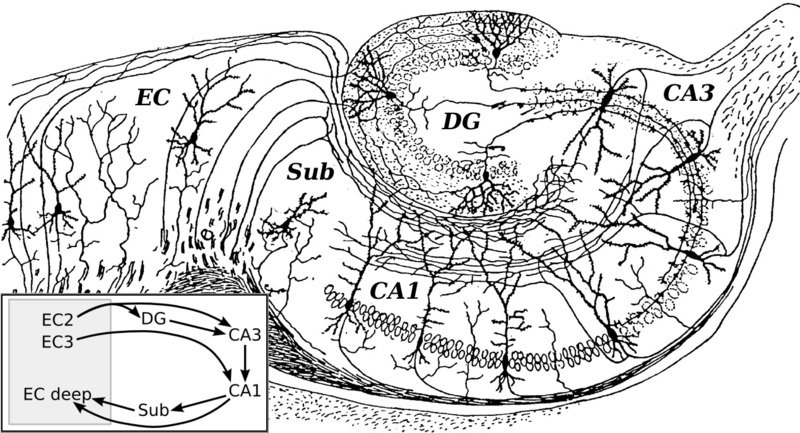 The study focused on the effect of estrogen on the hippocampus. Researchers discovered that both of the known estrogen receptors rapidly activate a pathway essential for memory formation in the hippocampus of female mice, but only if they interact with the glutamate receptor mGluR1. This is a modified drawing of the neural circuitry of the rodent hippocampus.
Home
Featured

The loss of estrogens at menopause increases a woman’s risk of dementia and Alzheimer’s disease, yet hormone replacement therapy can cause harmful side effects.

Knowing the exact mechanism of estrogen activation in the brain could lead to new targets for drug development that would provide middle-aged women the cognitive benefits of hormone replacement therapy without increasing their risk for cardiovascular disease or breast cancer.

In a new study, Karyn Frick, professor of psychology at the University of Wisconsin-Milwaukee, uncovers details about estrogen’s role in the complex cellular communication system underlying memory formation.

“The receptor mechanisms that regulate estrogen’s ability to enhance memory are still poorly understood,” says Frick. “With this study, we’ve begun to sort out several of the key players needed for estrogens to mediate memory formation.”

The research, published in the The Journal of Neuroscience today, focused on estrogen effects in a brain region called the hippocampus, which deteriorates with age or Alzheimer’s disease. The researchers found that each of the two known estrogen receptors rapidly activate a specific cellular pathway necessary for memory formation in the hippocampus of female mice, but only if they interact with a certain glutamate receptor, called mGluR1.

The study revealed that when this glutamate receptor is blocked, the cell-signaling protein ERK cannot be activated by the potent estrogen, 17β-estradiol. Because ERK activation is necessary for memory formation, estradiol failed to enhance memory among mice in which mGluR1 was blocked.

Frick’s team also found evidence that estrogen receptors and mGluR1 physically interact at the cell membrane, allowing estradiol to influence memory formation within seconds to minutes. Collectively, the data provide the first evidence that the rapid signaling initiated by such interactions is essential for estradiol to enhance memory regulated by the hippocampus.

“Our data suggesting that interactions between estrogen receptors and mGluR1 at the cell membrane are critical for estradiol to enhance memory provides important new information about how estrogens regulate memory formation,” Frick says. “Because membrane proteins are better targets for drug development than proteins inside the cell, these data could lead to a new generation of therapies that provide the cognitive benefits of estrogens without harmful side effects.”

Depressive Disorders Can Lead to Changes in Immune Cells

Notes about this memory and neuroscience research

Other authors on the paper include Marissa Boulware and John Heisler.